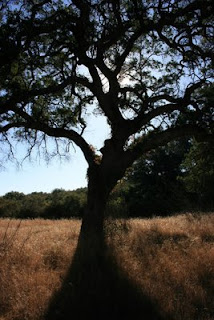 I took the above photo because I like the back lighting of the poisen oak climbing up the trunk, but as I looked through the camera's viewer, I realized the real photo was the shadow complementing the overall shape of the tree. I made no changes to the photo other than to reduce the size and image quality for the web.

Perfect lighting, plus a little saturation 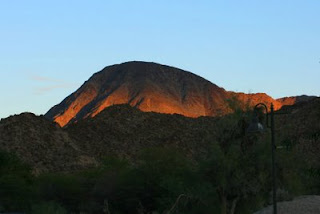 Using Photoshop, I raised the saturation value of the above photo, hoping to give the online version the same beauty that made me want to photograph this rocky hill near The Living Desert. The sunlit reddish rock made a impressive contrast with the shadowed foreground rock and the peak. The unique lighting effect was caused the shadow of Mt. San Jacinto covering the foreground, with the top in the shadow form a cloud above the peak: 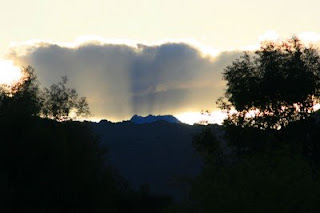 Also in the first picture one can see an excellent light fixture. The Living Desert's sense of environmental awareness extends to protecting the night sky.

I've just added this picture of Pangea to the planet viewer on http://www.brightstarstemeculavalley.org/: 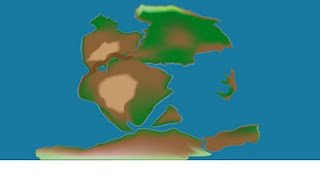 The picture is my drawing mostly based on a version of Pangea shown in May 2009 issue of Astronomy (which in turn was based on a map shown here: http://pubs.usgs.gov/gip/dynamic/historical.html.) I have no qualms about borrowing from Astronomy, as the same issue has a diagram of JPL's Madrid 70-meter radio telescope that was modelled off of one of my illustrations. So borrowing is not an issue, but accuracy is. In my drawing I'm trying to stretch the map into a 2x1 ratio that my planet viewer turns into a globe and animates its rotation: 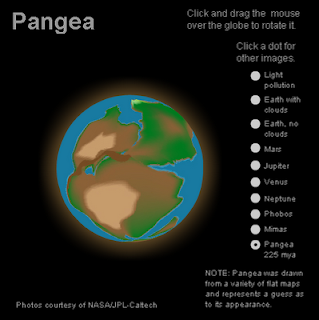 You can click and drag the image to view any angle of the globe. For example, here's a view of the southern pole: 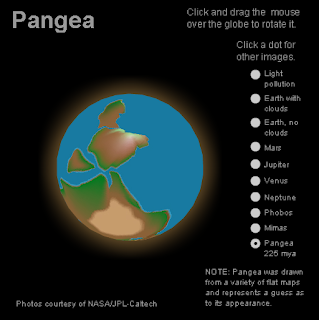 But I've never seen a map of Pangea Earth's southern pole, so I have no idea how accurate this is, and I welcome any references and corrections to this or any part of the drawing. I'll share the result too.
Though it would be careless to assume, I feel I probably have the ocean view of Earth at the time of Pangea fairly correct: 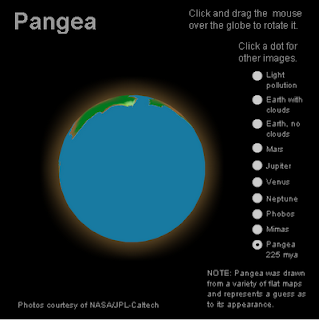