On Oct. 24th, 2015, I saw my second ever moon dog. A moon dog is the same phenomenon as a sun dog but the light source is the moon instead of the sun. Moon dogs are more rare than sun dogs:


In the following photos, the moon is on the right and is over-exposed. The moon dog is the splash of light and color near the tree. Also visible in the pictures is the 22-degree ice halo that is commonly seen around the sun and moon: 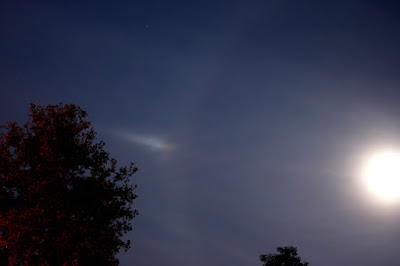 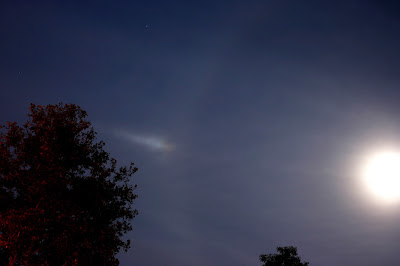 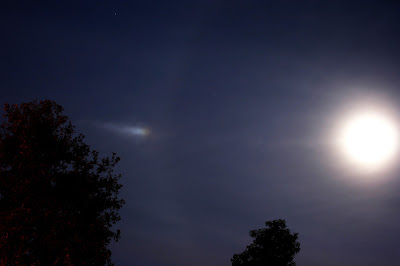 Around 6:10 pm on Saturday evening (7 Nov 2015)  I got a call from my cousin in San Diego wondering if I could see and if I knew what the great green blob in the western sky was. I think I suggested a rocket launch or noctilucent cloud but would have a look. I was surprised to see what appeared to be a green blob high in the west. It didn't look like previous rocket trails I'd seen, so I began photographing: 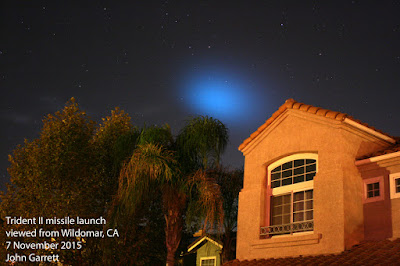 I was surprised by the blue color and the lack of a clear trail. (However on the following morning modified the output levels of my photos and could clearly see the trail on the left of the blob.)

I entertained a variety of explanations. I googled noctilucent clouds, vaporized meteors, and circular aurora. Of course, the most obvious, a launch that had been announced in the news and was the reason that the LA Airport had stopped outgoing flights, was pointed out to me though the wonders of social media. In my defense, it was hard to see a trail which lacked the mother-of-pearl tendrils common in launches.

The effect reminds me of comet Holmes from 2007. This comet expanded greatly over a month, but by virtue of it's orbit and Earth's, it remained in the same area of the sky for a month. Thus, we were looking at it from behind and therefore seeing a plume but no tail. 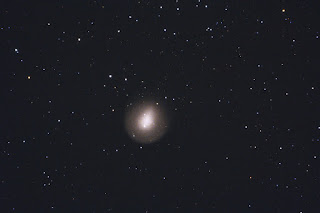