The center of this picture shows a hill that burned about 10 years ago. The hill is split at the middle of the picture by a dark vegetation line showing where the fire stopped. The left side burned, the right didn't. The left is now mostly grasses and small herbs; the right is chaparral, consisting of large bushes that are mostly 4-6 feet high but can get up to 10 feet high. 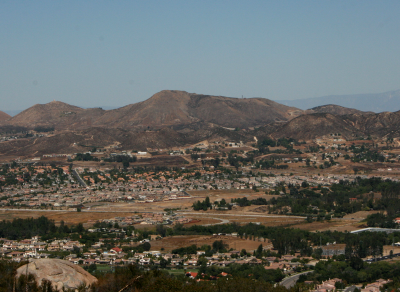 My region offers ample opportunities to observe brush fires. The chaparral and forests are dry throughout June through October. The 14-20 inches of rain per year falls mostly in the winter months.

Back to my roots

My initial fascination with science (not counting dinosaurs), began with the study of botony and my perceived need to be able to identify any species of tree while passing at 50 mph. However, identifying everything one may find while hiking is a lot more difficult. I've started collecting my plant photos in an interactive plant identification guide that will, if nothing else, help me to know when I've already photographed a specific species.

My plant identification guide can be viewed here: http://www.brightstarstemeculavalley.org/science/ImagesEverything_botony.html

One clicks a category or attribute on the left and the selections get narrowed down and results are displayed on the right. 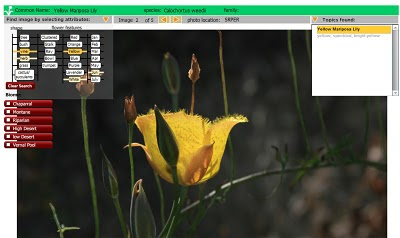 I'll be improving the interface while continually adding images and new species. The main problem I need to fix first is the biome filters (chaparral, montane, riparian, etc.). I need to make these add each set they describe. Currently, if you click two biomes, my program removes all species except those I've tagged as being in both selected biomes. This is first on my list of enhancements.

Thurs, 23 Sept., 7:00 pm at the Rancho California Water District building in Temecula, Ca, I'll be presenting the latest version of my talk on Earth, Orbit and Climate. In Earth, Orbit, and Climate, I share what I've learned in the past few years about the astronomical foundation of climatology, and specifically, the roll of Earth's orbit in governing climate over millennial time scales. I also discuss greenhouse gases and Earth's carbon cycle.

I draw heavily on the following resources:
My revised presention will be online within the next few weeks (current version: Earth, Orbit and Climate). My new version will remove the section on the solar system, which was pretty weak (on my part; no reflection on my source). The most exciting change is that I've added a section on the Eemian interglacial in which I've used astronomical solutions, CO2 levels, and temperature data from the above references to illustrate the Milankovich theory of climate. Below is an illustration from the presentation. 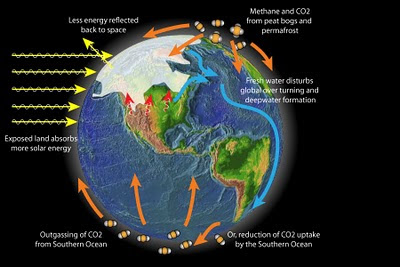 Within a few weeks I hope to update the online version and provide elaboration here for the fun of sharing as well as exposing my work for educational criticism.
jg
Posted by jg at 1:03 PM No comments:

Astronomical solutions for paleoclimates generates Earth's orbital parameters (eccentricity, tilt, climatic precession, and insolation) over a span of 50 million years in the past to 20 million years in the future. One of my slow learning projects has to been to use the output from this program to create illustrations of orbital configurations at key climatic transitions, such as the Eemian interglacial. When graphed, data of orbital parameters often look like this: 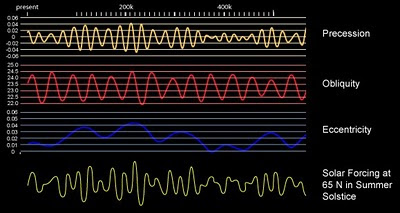 (Diagram redrawn from Wikipedia and IPCC 4th Assessment Report)
For a scientist, this is useful, but not being a scientist I looked for a display that I would find inituitive and useful for explaining what I'm learning to others. I'm not going for precision, but rather, for an illustration that can show the change and show when some orbit parameters would have a collective warming or cooling influence. For example, the following contains my exaggeration of orbit eccentricity and tilt: 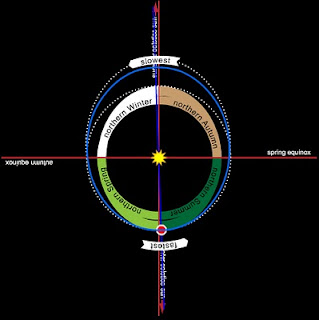 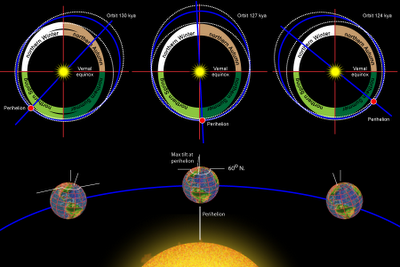 I think I captured the orbits correctly (according to my analogy) in the top half of the diagram. The bottom half is wrong, but I'm keeping it as a puzzle for me to ponder how to fix (the right Earth should be paired with the left orbit; and the left, with the right, but I still want the tilt oriented to the sun).
Using Astronomical Solutions, I gathered the mean monthly insolation for June at 60 degrees North latitude. I chose 1000-year intervals to minimize the numbers I have to chart. I included eccentricity, tilt, and climatic precession. Also, I generated the insolation for 60 degrees South latitude during December, so I could compare the Northern summer's solstice to the Southern summer's solstice. One can see a big difference in insolation as a result of the two summers occuring at opposite ends of Earth's orbit. I also throw in some Holocene values to compare astronomical forcing of the Eemian to today. 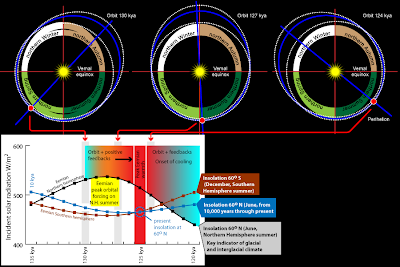 Next, I hope to get some data on CO2 increases from warming (which in turn would warm the Eemian further) and add some illustrations of possible arctic and ocean feedbacks that will have added to warming or would have contributed to the rise of atmospheric CO2.
jg
Posted by jg at 8:43 PM 2 comments:

Amateur astronomy presents numerous surprises. In this case, a friend of mine was having trouble collimating his newtonian reflector. Astute problem solving quickly determined the cause: 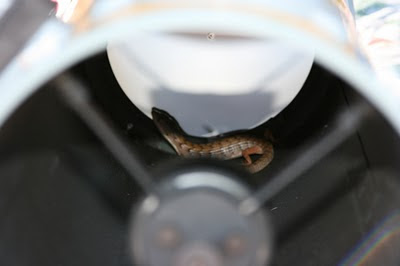 This photo shows the view down the aperature of a rather high-end telescope he uses for imaging. The sacrosanct mirror is at the bottom of the tube, and the blurry foreground shows the telescope tube and secondary mirror.
The lizard appears to be a species we refer to as alligator lizard, for the pattern of the scales resembles an alligator's scales.