A letter to President-elect Trump

In the spirit of working with the President-elect, some of my international friends and I have linked the following individuals to Trump's Chinese global warming conspiracy:


Though there are many more individuals to be outed, we stopped at those doing their work before Trump was old enough to find conspirators on his own. Writing in the now foreign language of fact and reason, my friends argue that climate science is a proud accomplishment of Western civilization:


Dear President-elect: A message from across the pond

I'm backing them with this illustration: 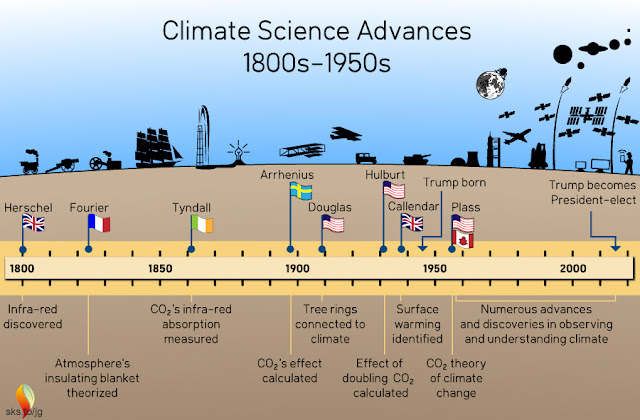 The Western Riverside Council of Governments is sponsoring a test of LED light fixtures considered for widespread use throughout western Riverside County. The new LEDs offer great improvements on energy consumption, aiming, and intensity control, but vary in how well they minimize light pollution, preserve a night-time ambiance, and disrupt circadian rhythms of humans and animals. Understanding the wavelengths of light, which humans perceive as color, is key to selecting lights that minimize negative effects.

WRCOG is sponsoring tours of the test lights. About a dozen manufacturers provided sample LED lights that were installed in various settings in the city of Hemet. Installations include commercial, roadway, and residential sites. The tour participants are invited to rate how they safe they feel and how well they see under each light as well as how much they like the aiming (e.g., you may like a light but not want it spilling into a your bedroom window, or maybe you would like it to spill a little into your front yard). Participants were discouraged from looking at each light directly and were not told of the lights' exact specifications on color temperature. I was a flawed participant because I was to eager to assess the glare and spectra of the lights for their impact on the night sky. My interests required looking directly at the lights and testing their output with my spectograph: 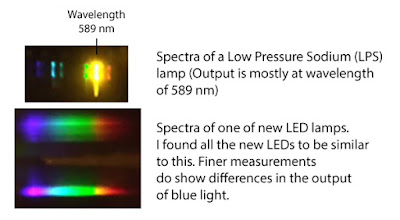 A key specification in understanding the impact of a type of light on the night sky, and therefore, on Palomar Observatory and our ability to enjoy the night, is color temperature. Color temperature comes from the physics concept of black body radiation and is used to describe how a given unit of mass radiates energy when heated to different temperatures. If I took a chunk of matter and heated it to 2700 K, 4500 K, and 6000 K and measured the wavelengths of light emitted at each temperature, I'd have data similar to the following: 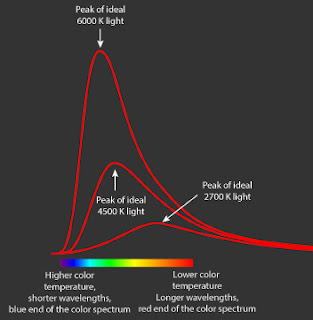 Diagram produced with my home-made Planck black body radiation curve generator
which is available on line at my website. See Planck Viewer,
and ask here if you need help using it.

So, an object that is at 6000 degrees Kelvin (6000 K) will put out radiation all across the electromagnetic spectrum but the wavelengths at which it emits the most energy will be at the green part of the color spectrum. 6000 K is approximately the temperature of our sun, and its peak output is in the green wavelengths, but since our eyes are adapted to the full range of color produced by the sun, we perceive the sun's light as white. Any lamp matching the sun's output we will perceive as white and the color temperature specification would be 6000 K. If you see a light that has noticeably more blue color, like with some plasma TV screens, you might infer that it's color temperature is higher than 6000 K, perhaps 7000 K or 8500 K.

The blue spectrum of light affects human and animal health. More of it at night, when the body is trying to shut down for sleep, will disturb the natural production of hormones that regulate our health. That is why the American Medical Association has recently issued warnings about the wide spread adoption of lighting that peaks in the blue part of the spectrum. The blue end of the spectrum also scatters more readily in our atmosphere, and therefore, it creates more light pollution than lights on the red end of the spectrum. Consider a common observation, the sky is blue on a clear day and red at evening and sunrise. This is because the blue light gets scattered and the red light beams straight or bends only slightly. So, lights with a lot a lot of blue will be scattered back at us, creating for us the look of a gray sky with few stars. We see this effect on cloudy nights when the clouds reflect most of the light back to us and our bedroom windows glow with this light pollution.

Below is a light on WRCOG's test. I was impressed based on my visual observation. The color is similar to the color of low-pressure sodium, but offers more color rendition and is very well aimed, hitting the street only. But when I looked that the lights through my spectrograph, I was reminded that the real test will be scientific measurements of the lamp's spectra. 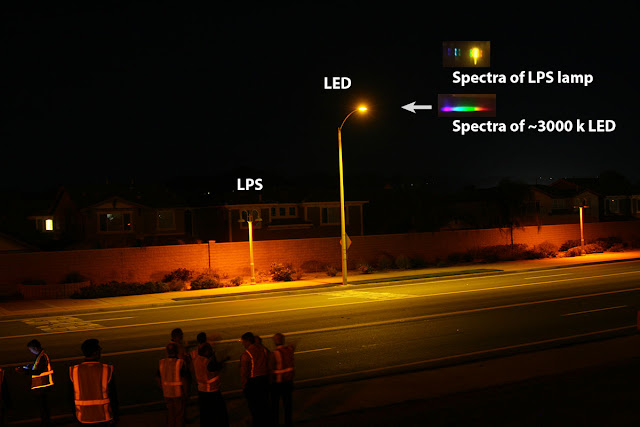 Below are two light spectra measured by Dan McKenna of Palomar Observatory. All I know about the specific lights are their designations within the test program (P104 and P46). I've added some annotations: 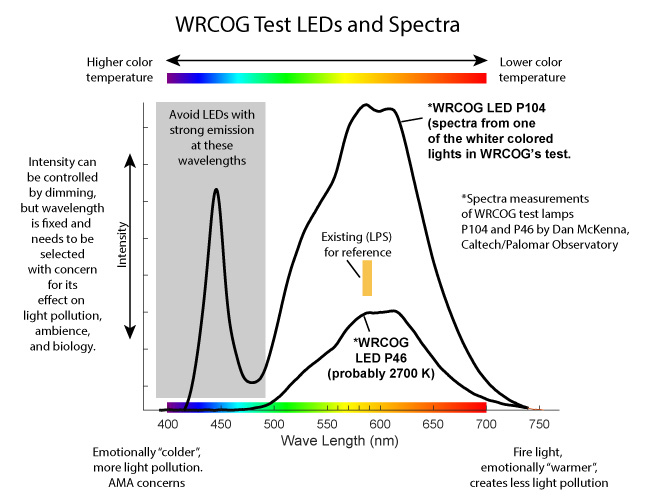 The photo composite below shows a comparison of three lights. The top and bottom are new LEDs that differ in the range of color produced. Both are rated at a maximum of 3000 K though I suspect that this rating doesn't accurately reflect the blue light in the bottom example. 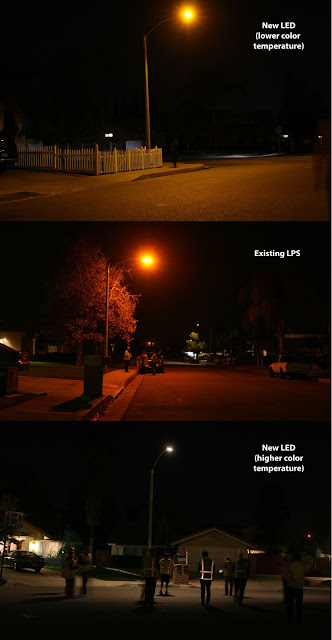 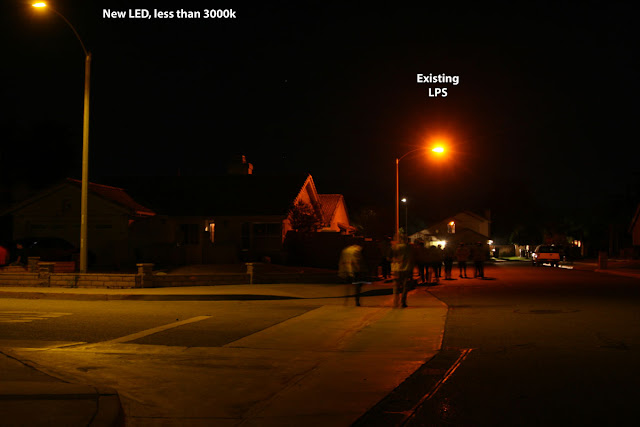 This row of distant lights demonstrate that it's easy to aim the new LEDs. You see less flare from the new lights because most of the light is directed downwards. 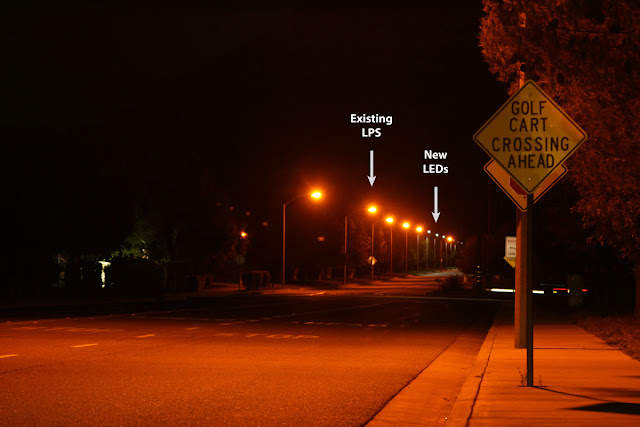 The type of lights chosen now will have a great impact on our night sky. All offer excellent opportunities for energy savings, aiming, and dimming, but some will produce wavelengths that will take away some of the pleasant qualities of the night. I am, of course, biased, because I consider the night sky a key feature in my quality of life. I've learned to see well in low lighting by relying on my night vision. I've also learned that though you can perceive color better in white light, such lighting doesn't make me see detail better. But what is important to me may not be important to others, so it is important for others to participate in these tours to offers their opinions. I welcome diverse opinions here and will preserve any comments.

American Association for the Advancement of Science: Can't Sleep?

Light Spectra with caption for distribution: 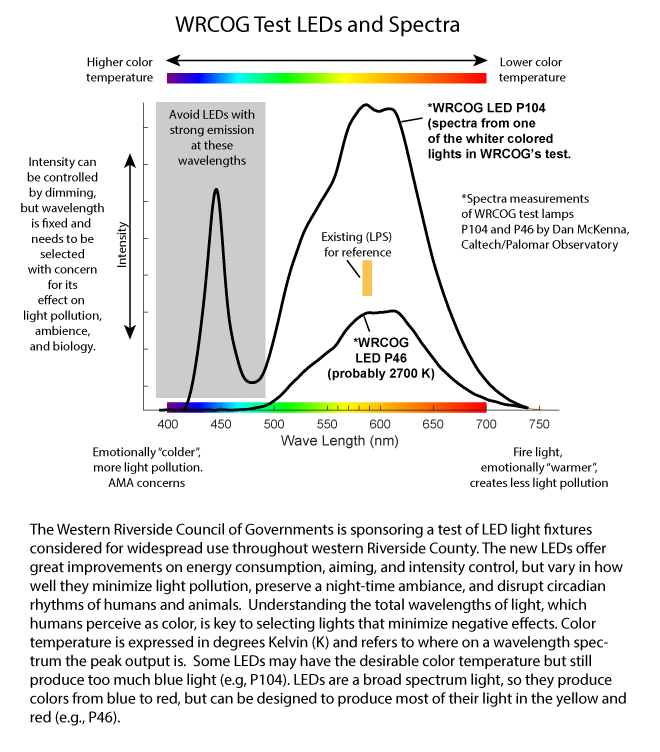