I have envied the climate charts I've seen in Wikipedia and in science journals showing temperatures, CO2, insolation, and orbit parameters over the past million years, so I decided to create my own viewer: Vostok Viewer

I've taken the data from these sources:
and created this: 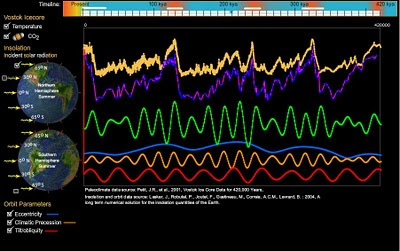 ...which is a Flash-based viewer that allows you to see graphs of data from these sources and to zoom in on specific periods, such as the Eemian: 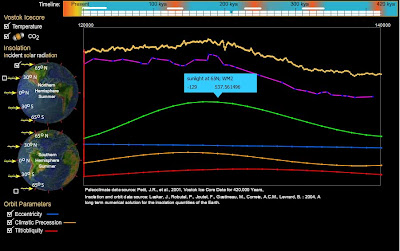 My program is crude at this time. I plan to add more features for controlling the appearance of the graphs as well as flexible views of the timeline (so a user can focus on any period rather than those I've configured). And of course, I'll add other data sets, but for now I hope to iron out the features using the data I have.
I started this project when I wanted to see if observations I was making about the Eemian held up for other interglacials. I saw a strong correlation between summer insolation at 65 degrees N and the onset of interglacial temperatures. This correlation was consistent with what I've read from science journals. However, from my Vostok Viewer, I'm observing that the correlation isn't as visually striking for the interglacials at 240 kya and 325 kya: 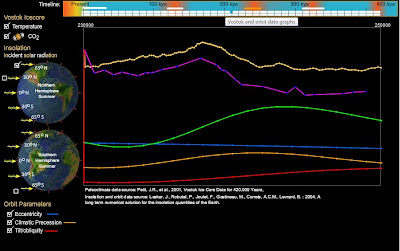 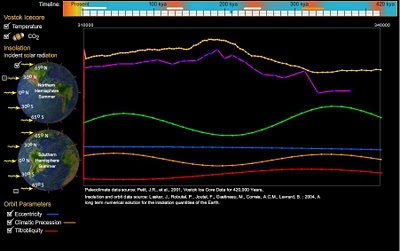 The green line in the above graphs is June insolation at 65 degrees N. For the onset of the Holocene and Eemian, you can see that the green curve corresponds to rises in temperature (yellow) and CO2 (lavender), but in the earlier interglacials, the solar forcing peaks before the peak in temperature and CO2.
This discrepancy invites more study from me. Are there see-saw effects that delayed warming in Antarctica or are there margins of error in the dating of the CO2 and temperature values? Is it time for me to open the book on more sophisticated data analysis? I'm sure the climatologists know. Here, I'm trying to do my homework before asking.
jg
Posted by jg at 12:34 PM 2 comments:

I'm using the Milky Way as a metric for local light pollution. I don't expect to restore the skies of ten years ago, rather, I hope only to keep the Milky Way visible from typical backyards. Below is a photo of the Milky Way on August 12, 2010 from my backyard. Though the contrast is poor, our galaxy is still visible to the naked eye and to the camera. 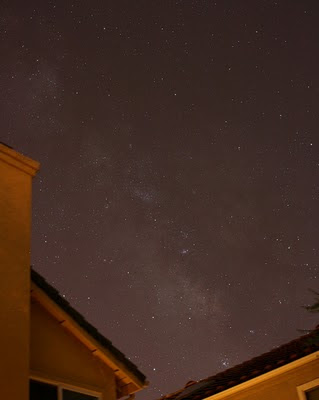 Photo: Region near Sagitarius and Scutum.
jg
Posted by jg at 12:15 PM No comments:

I just started following comet Hartley 2. It's faint, but detectable from moderately light polluted skies. Below is a wide-field view taken with a 28mm camera lens and an inset taken with a 3-inch telescope at a focal ratio of f5. (Click to enlarge the photo.) 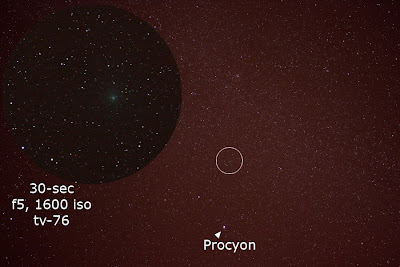