Interrupting this Sunspot for an Eclipse

My sequence of images tracking sunspot AR2192 were interrupted by the moon, or a partial solar eclipse. Here's the partial eclipse at it's peak from last Thursday, 10/23/14: 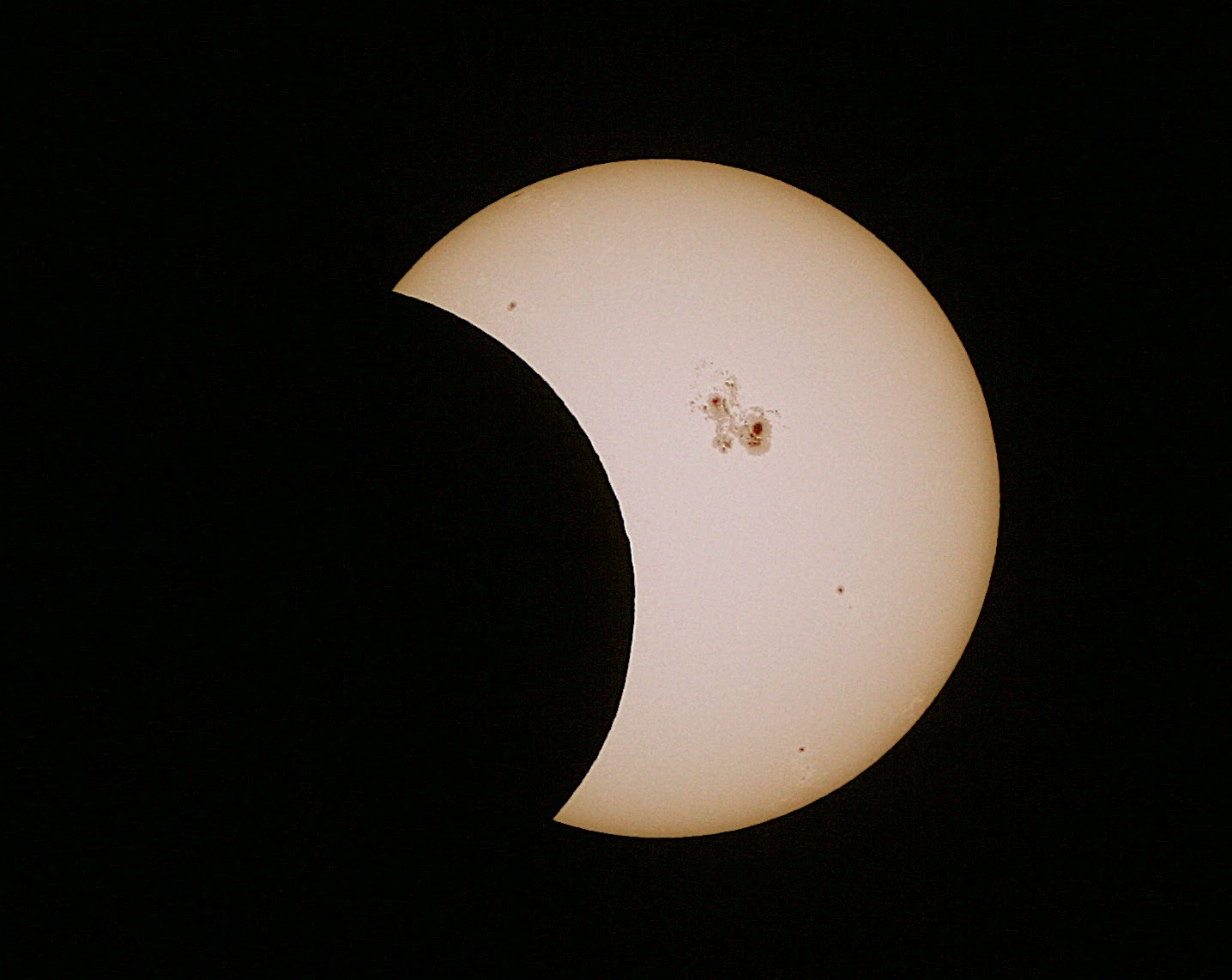 Unlike the eclipse, the sunspot endures to this day,

Still obsessing over the sunspot AR2192

Here are photos of sunspot AR2192 from today and yesterday. I wanted to see it it changed much since yesterday. I think not. Most of the difference appears to result from our changing angle of view as the rotating Sun brings the sunspot to the center. 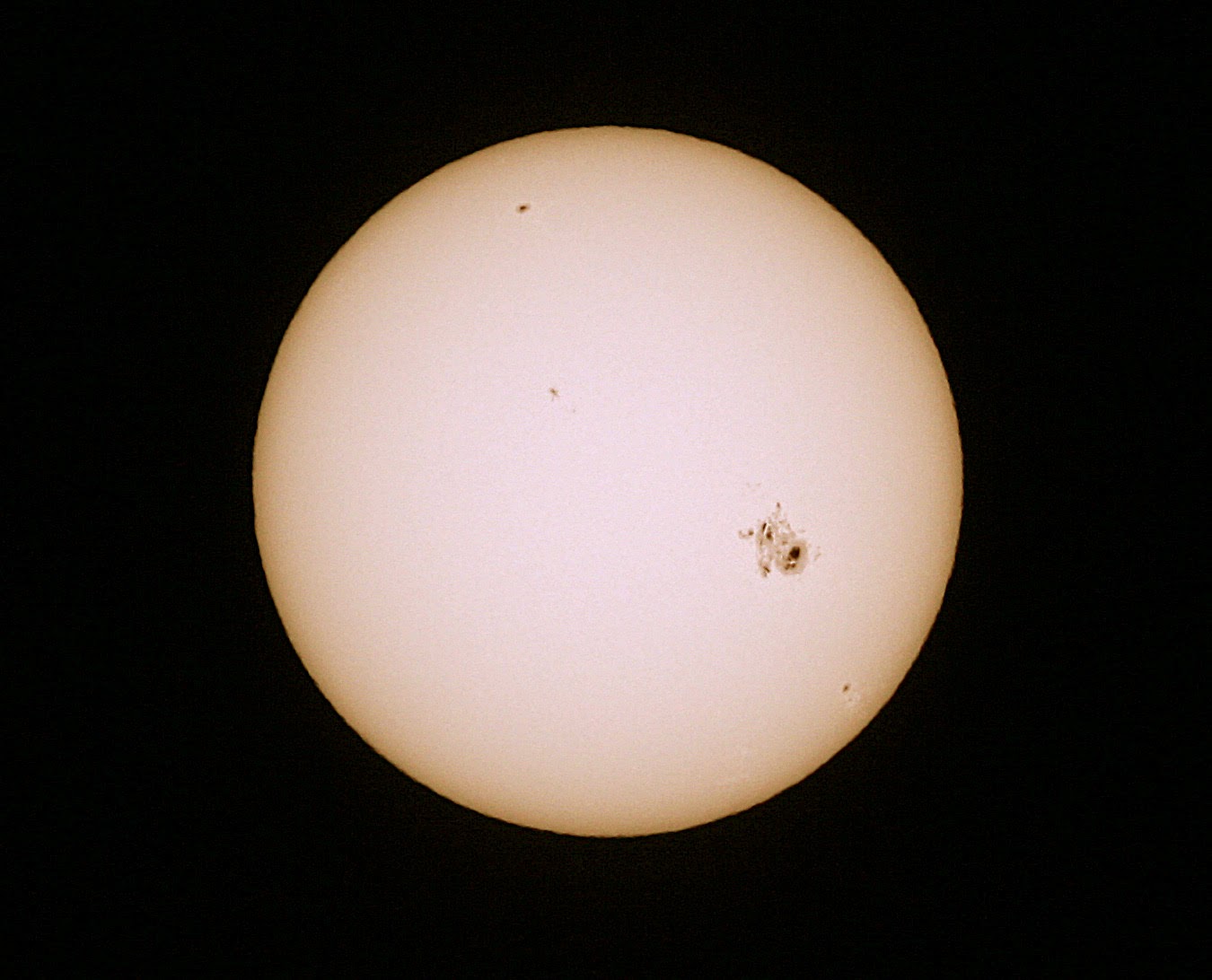 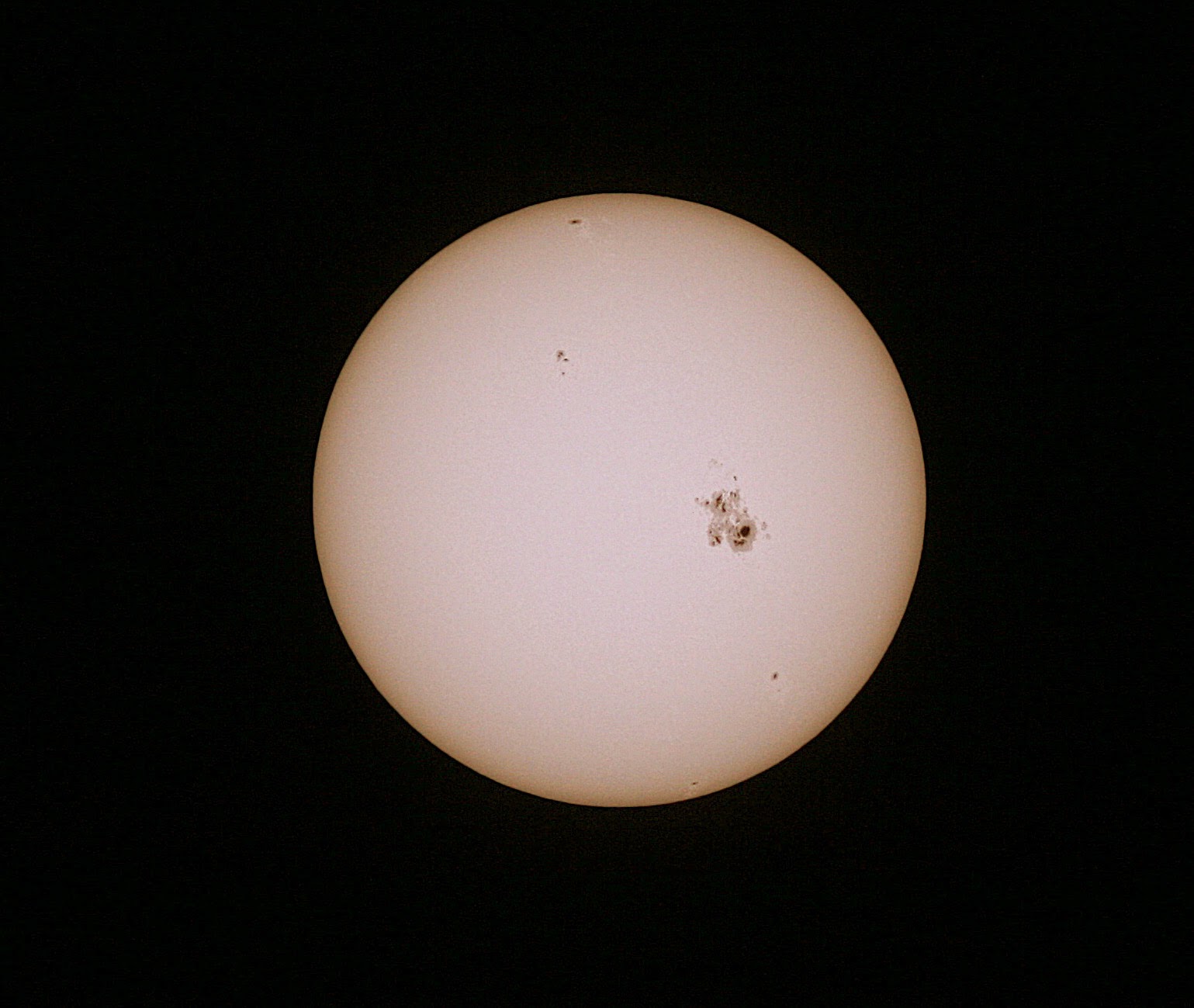 I continue to be taken by this impressive sunspot. One friend observed that he can see the sunspot using solar glasses. These glasses offer no magnification increase. Below are photos from Monday, 20 October 2014. 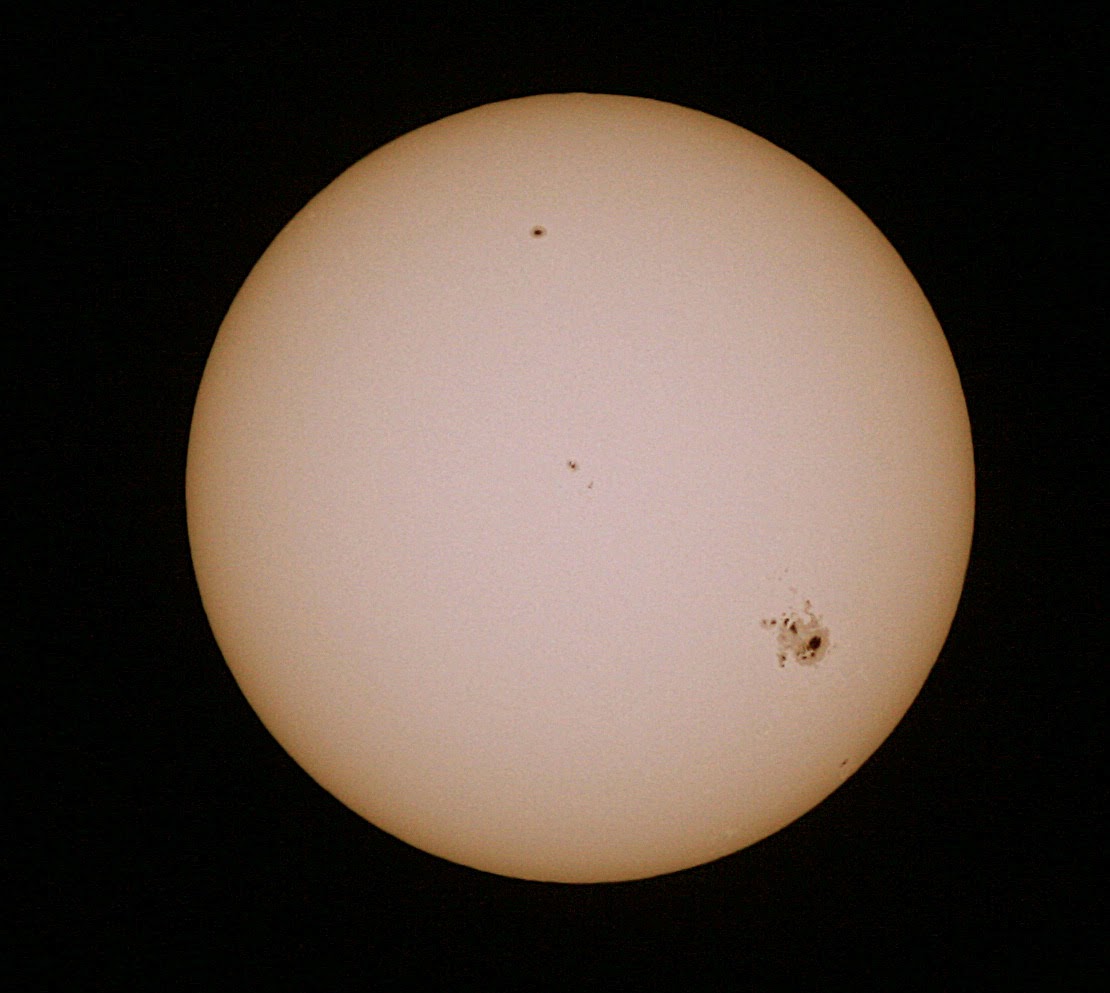 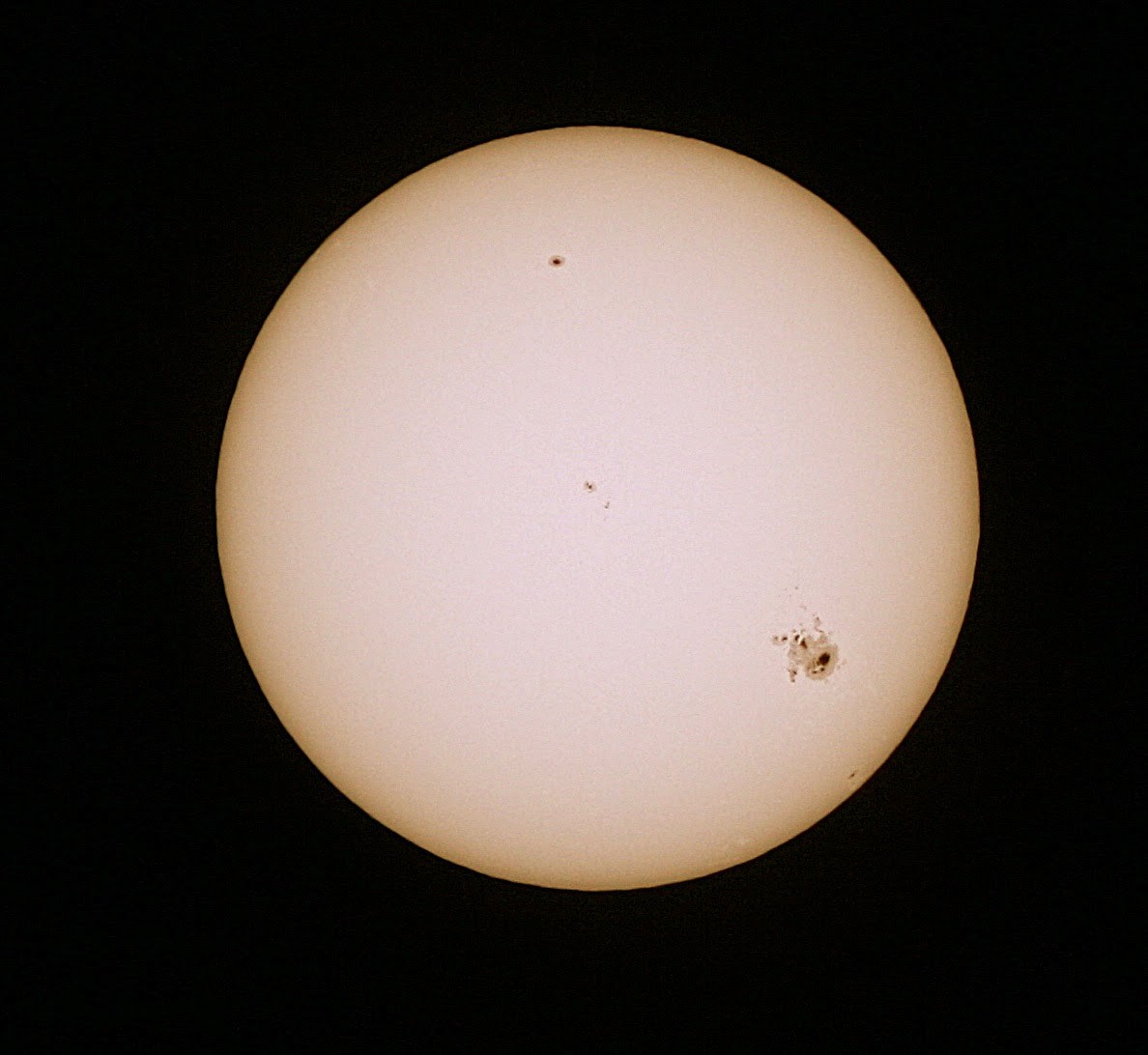 Another grand sunspot is rotating into view: 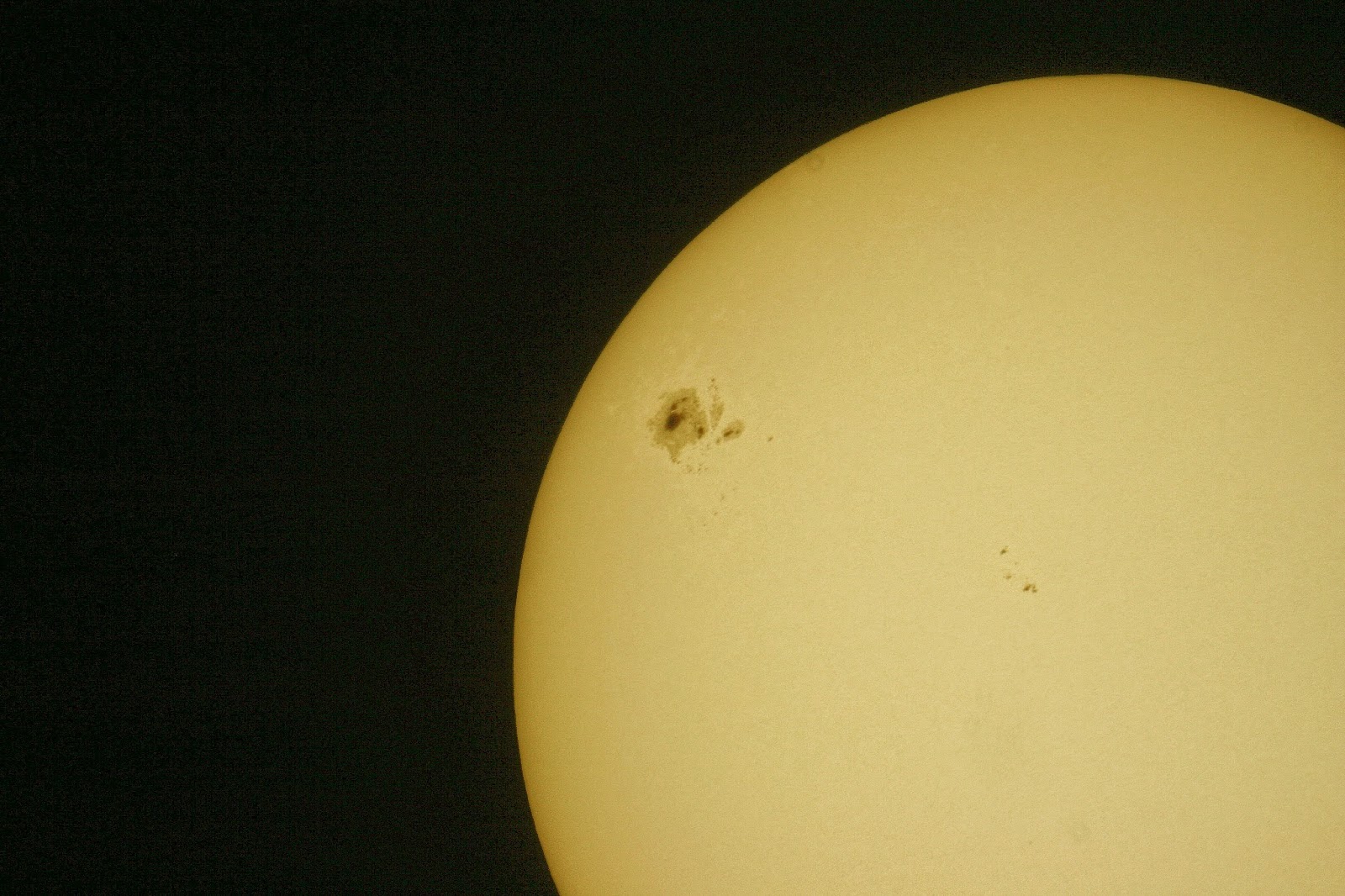 The photo was taken today (19 Oct. 2014) with a white-light solar filter over an 8-inch Schmidt-Cassigrain telescope at F10. I added a little yellow tone for aesthetics.

The photo below shows the sun with my scope's focal ratio reduced to F6.3, allowing me to get the full sun on the frame. The inset highlights the sunspot. 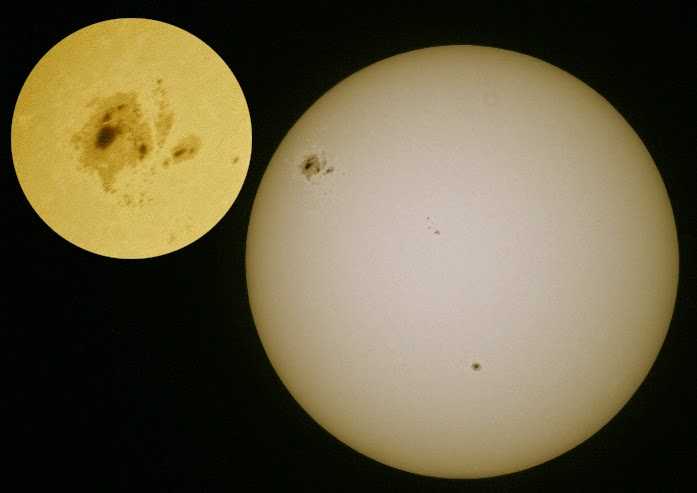 This sunspot will rotating toward the middle of the sun (from our viewpoint). It is the type of sunspot that will make news if it lets loose a flare while pointing at us. On the other hand, it may fade slowly and uneventfully.

Below, I've doubled what one can do with a solar filter. It's great for solar selfies. Here's me, my camera, and our sun in the solar filter, which is essentially a mirror that reflects 99.9% of light. 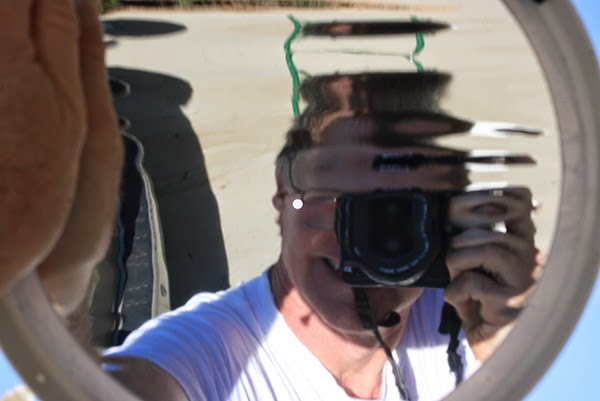 I pulled out just the sun from the above photo. The photo was taken at 39 mm focal length. I believe a camera at 50 mm focal length produces images of a scale matching human perception. So, the sun in this photo should be smaller than human perception. With that in mind, I wondered if this sunspot would be visible to the naked eye under cloudy or hazy conditions that allowed for a safe glimpse. DO NOT LOOK AT THE SUN, but I suspect this one under special natural conditions could be viewed with naked eye. You can see a fragment of the grand sunspot in the lower left corner:

Opening Fire on a Can of Worms

I probably shouldn't touch issues involving the Second Amendment and gun violence. I'm no expert on the risks and benefits, and commenting on this topic gets you labelled as one of us or one of them. Additionally, I've observed how issues such as climate change, vaccinations, evolution, and genetic modification are misreported by various media and amplified by people of specific political views. (Note my examples represent liberal and conservative extremes.) So, the same misinformation is to be expected in the issue of gun safety, gun control, and interpreting the Second Amendment.  It is difficult to know where to get reliable, objective research. It is also difficult to examine and remove one's own biases.

I've known one person who used his gun to shoot and kill his ex-wife and himself. Events reported suggest that he intended to kill his two children too, but they managed to escape. I know one person whose intimate friend was shot and killed by an intruder. I've met a sociopath drunk who screamed murderous threats all night from a neighboring campsite (he was provoked by my asking him kindly to stop urinating in our campsite). I've been threatened directly, words to the effect that "If I had a gun, you'd be dead". I once lived in a home that had been broken into for the former occupant's gun. (Just the gun was stolen.)

I've watched a national organization, which is proud of its values, instruct children in the use of BB guns without adequate barriers between the shooters. They lectured that each person's gun must point up or downrange, no exceptions, but that didn't prevent one clumsy child, perhaps age 7 or 8, from pointing his barrel to the temple of the child next to him. I later learned that a BB gun to the temple can kill a child.

I'm sure there are many more examples if I plumb the murky depths of my memory. And of course there is the ongoing  non-events of many gun owners who are not involved in a shooting, as well as the hard-to-quantify deterrent effect.

A recent shooting in a nearby town got me thinking again, mainly because I've imagined myself in the same situation as the home owner who had to shoot an intruder. But by the grace of God, I could have been that person, and I can guess at the fears, self-doubt, and questioning of what is happening as one warns an intruder and then feels compelled to shoot in self-defense.

Studies I've read cite little evidence of the use of firearms in self-defense compared to other uses. These studies also acknowledge that this statistic is difficult to obtain. How often is a deterred intruder really a dog or a raccoon? Accidental shootings, a mis-use of guns, have a body as evidence. The deterred intruder leaves no evidence.

Studies acknowledge this bias and try to compensate by comparing cities with different gun laws or the same city before and after the enactment of a gun law. But still, they arrive at fewer examples supporting legitimate self-defense and that the majority of incidents (which excludes the daily non-incidents) involve a gun used by accident, in a suicide, stolen and used against others, or used to intimidate spouses and family.

So, when the nearby home owner had to shoot an intruder, I  accepted that this was a clear case that bucked the data trend, a clear case of demonstrating the value of having a weapon and being prepared to use it. But a couple days later, more news of the event was released. It turns out that the intruder was drunk, staying with a friend on the same street, and had mistaken the house for the home of his friend.

There is no excuse for being this drunk and for resorting to breaking a window, but when one steps back from the incident and looks at public policy, it looks like a stupid error on one person's part was made lethal only by the presence of a gun. Yet, it could have gone the other way.

Below is a photo of the recent lunar eclipse, or "blood moon, " a term that has become quite popular. 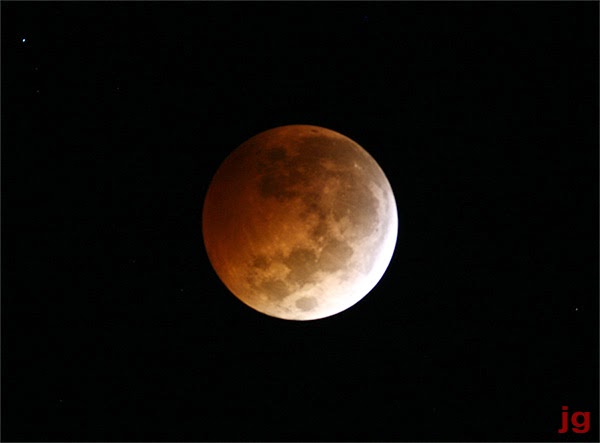 Less popular is the term "selenelion," which is used to describe an eclipsed moon that is visible when the sun rises, such that you can see each in their respective directions. This condition occurred for viewers in the eastern United States.

Compared to previous lunar eclipse from April, this one is a touch bloodier:

Next stop on the moon's busy agenda: a partial solar eclipse on October 23.