Our climate has cycles: daily, seasonal, multi-year (El Nino Southern Oscillation), and decadal (Pacific Decadal Oscillation). It's likely there are century-scale cycles, though I don't know the specific names of any. But the paleoclimate record provides evidence of long term changes in how efficiently heat gets re-distrubuted between the hemispheres and many of these episode behave like a seesaw, where one hemisphere warms while the other cools, and then reverses. And of course, there are millineal scale cycles, such as the rise and fail of ice ages.

A letter in today's Press Enterprise dismisses global warming, and the work of thousands of scientists, as natural cycles. I've written a rebuttal, however, because the PE's reply format is severely restricted, I'm using this post as a landing place for anyone interested in learning more about climate science.

Several years ago I tried to package climate data into interactive graphs that allow anyone with a Flash-enabled browser to quickly study paleoclimate and instrumental temperature records:

I may refer to these pages if anyone accepts my offer to discuss climate science.

UPDATE: I provided this link to answer a commentator's question about volcanic vs anthropogenic CO2:
UPDATE 2: Another person shared this link:

NOTE: It is appalling how limiting the response format at the PE is. If the PE allowed the space, I would have said this:


Jason, the following is settled: Atmospheric CO2 levels govern Earth's global temperature and have done so for, at least, the past 1 million years. Atmospheric CO2 levels contribute to the rise and fall of cold glacial and warm interglacial climates. The current rise in CO2 levels from the pre-industrial values of 270 ppm to 400 ppm are from human activity. The 400 ppm (and rising) CO2 level has no precedent going back a million years. The rate at which CO2 is rising has no precedent for a million years and likely for tens of millions of years. This rise is changing the climate. The poles are warming. The icecaps are melting. The oceans are warming and becoming more acidic. Less settled but still well-supported, the jet stream is becoming more prone to blocking patterns that create extreme weather such as storms and drought.  If you want to suggest otherwise on any of these points, you need to cite evidence, something stronger than "cycles". Your claim that government is exploiting the opportunity is unsupported. Your claim that scientists have a financial stake is unsupported and absurd. Because the PE's response format doesn't allow for a thorough explanation, I'll politely explain the science to anyone at my blog.

The PE's format isn't good for much more than short insults. -- Correction: I had a pleasant conversion at the PE site.

Every February, the rising sun reflects off the cross in the picture at the correct angle so that its light hits my front yard (where I took this photo yesterday morning). On a sunny morning, the glimmer is lost in the morning glare. However, on a morning with low fog (such that the cross is in the sun), the reflection is the only light penetrating the fog.  I first noticed this reflection two or three years ago on a foggier day when I couldn't discern the shape of the cross. My first impression on seeing it then was "Darn it! Someone added another overly bright, un-aimed light blazing into the sky." But I soon noticed it wasn't an obtrusive light, rather, a reflection seen at the right time and place, that will dissipate in minutes, and not return for a year. Yesterday was the first time since then that the angle of the sun, quality of cloud cover, and my being present, have all been aligned. 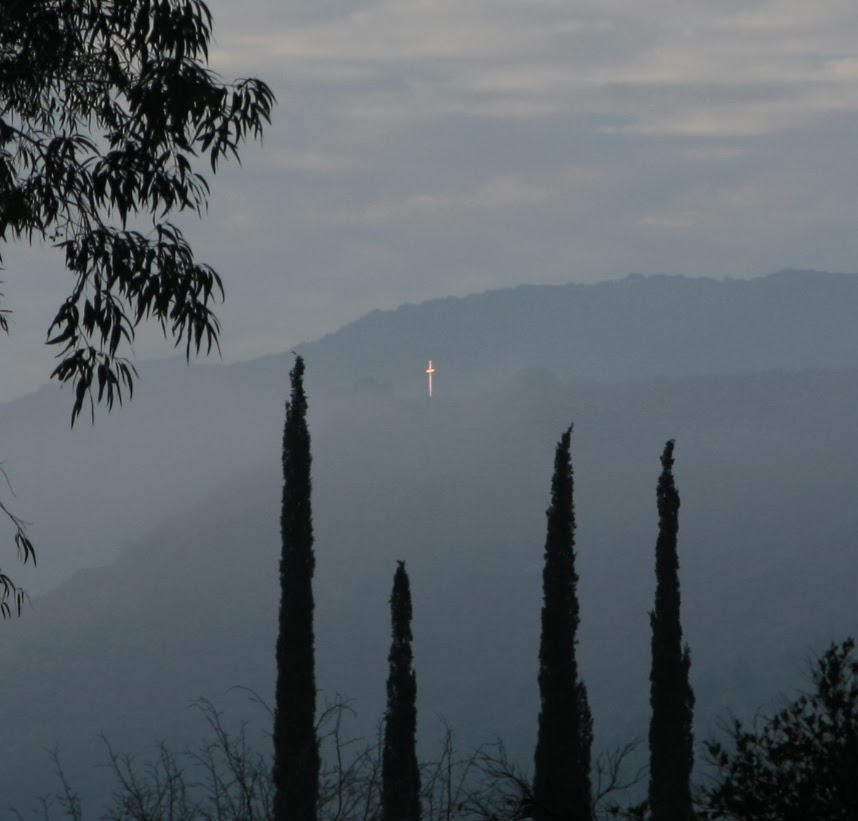 I don't share this for religious reasons, though the subject is more meaningful to many because of it's religious symbolism. Rather, I share this to celebrate understatement and subtlety when creating monuments. I enjoy a unique and rare view of anything, regardless of it's content, over the obtrusive seen-from-everywhere and at-any-time features that some institutions and cities put up.

I never tire of seeing a well-camouflaged creature, such as the frog or toad in these pictures. I almost flicked this rock off of my foothold, but stopped, realizing it was no rock. (How a rock had inserted itself onto a foothold I had used 15 minutes earlier hadn't occurred to me.) I admire not only how the frog/toad matches the granite, but also how half of it's back matches the dirt on the granite. Of course, after a vigorous day of rock climbing, I, too, often match the dirt. 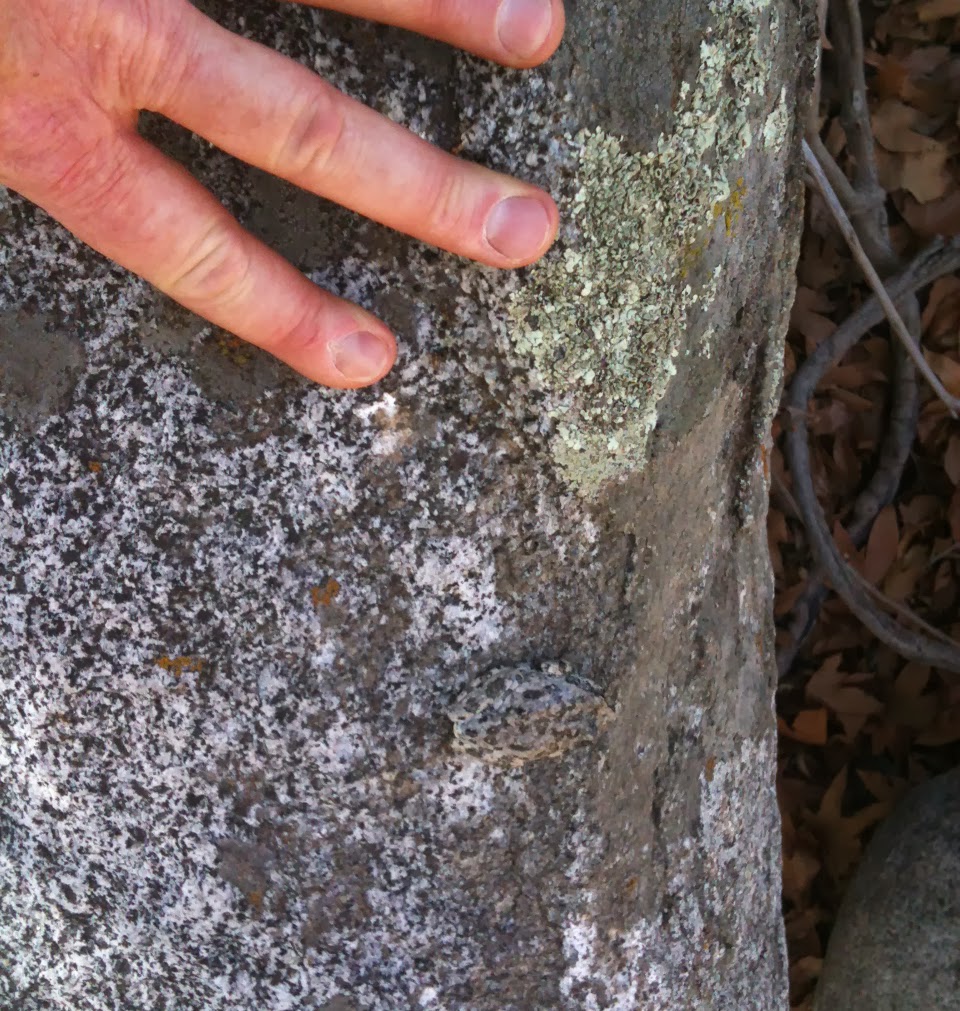 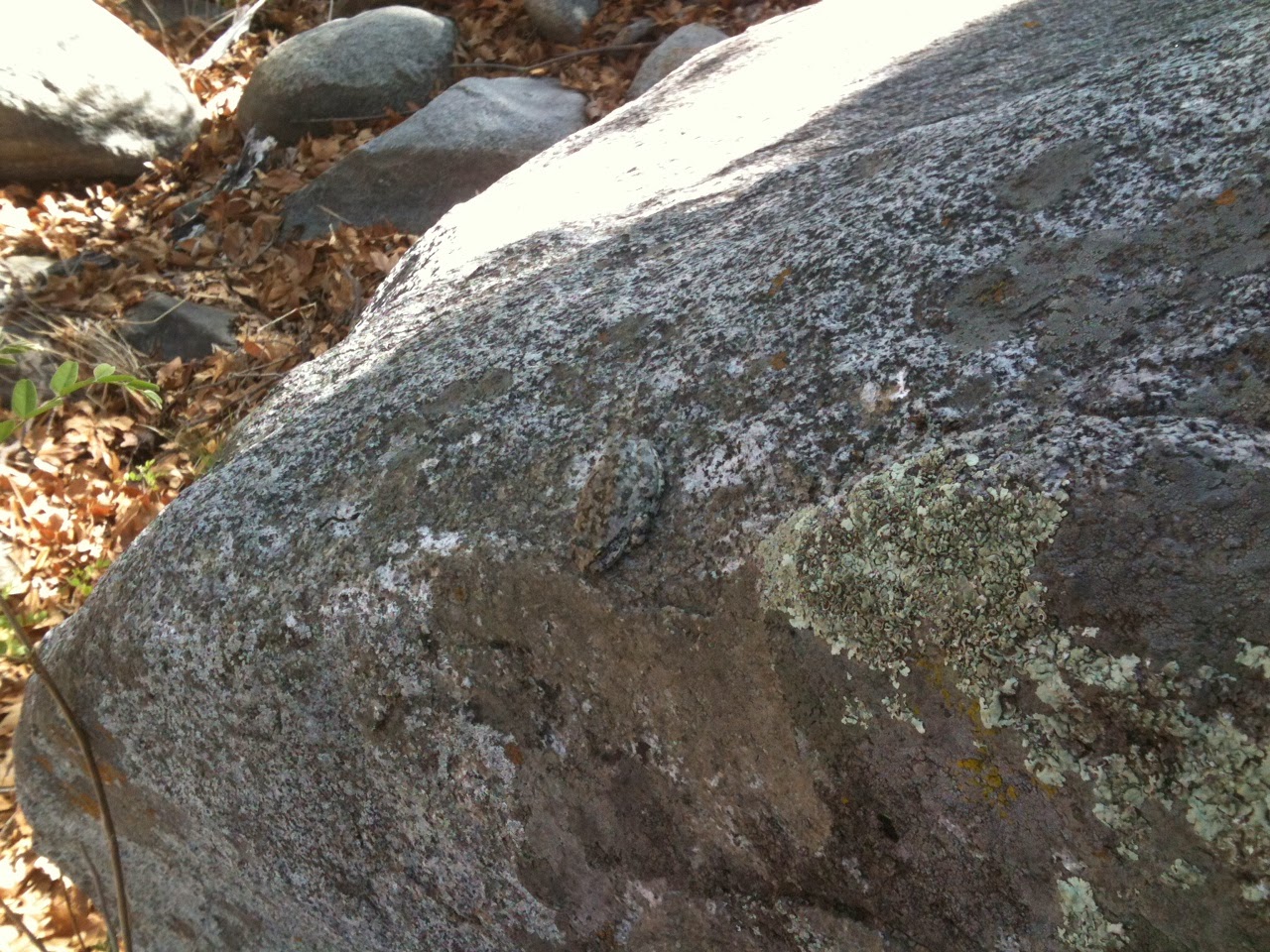 I took a quick peek at the sun today through a white-light solar filter. There's an impressive string of sunspots visible. People with proper solar filters, and especially, with hydrogen alpha telescopes should have a look. 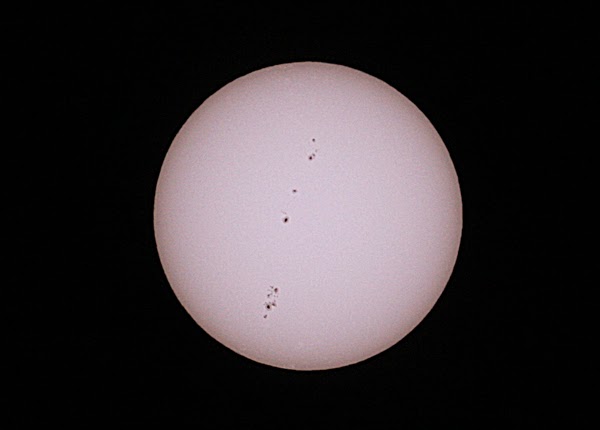 This illustration I created came about from criticism and humor. The reviewers of my illustration criticized the early sketches that showed the water tank as it is shown below, but with the Earth's surface down and energy loss shown as radiating upward -- which is how most of us think about the Earth and atmosphere: Down is Earth, up is space. The criticism was that the two illustrations had opposite directions of flow, and could I find some way to make the flow direction consistent to aid comprehension. So, in a bit of jest, since the website is Australian and I'm from the northern hemisphere, I turned the Earth and atmosphere upside down, and labeled the surface Australia. They liked it, so here it is: 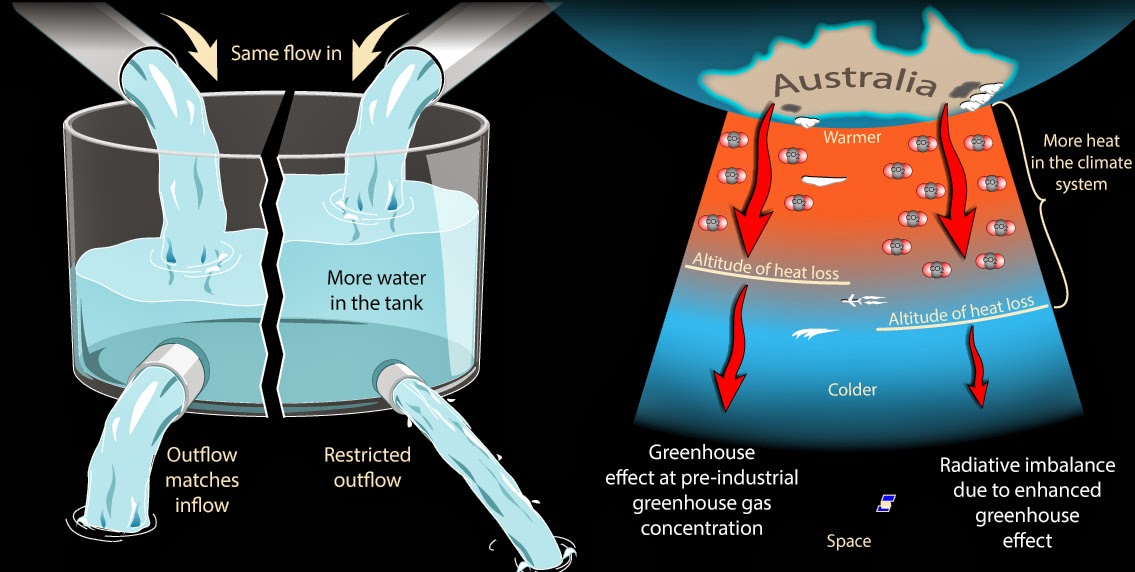 I speak little of my presentations to schools. This lack of sharing is a combination of time and modesty. After each show, my free time is usually devoted to the next show, and as for modesty, I assume my observations are too amateur to put on public display. However, I thought I'd share some of the pleasure of presenting on astronomy to groups of children and their parents who comprise our typical star party audience.

The show includes my illustrations, animations, photos, and the photos of fellow members of the Temecula Valley Astronomers. It contains snippets from other shows I have online (Exoplanets, Earth, Orbit and Climate) plus from a few I've not found to time to publish. My show has diverse topics, allowing me to adapt to the interests of the students.

One common theme that I present is is parhelia. Parhelia is atmospheric phenomena caused by water and ice and sunlight. --not really astronomy, but it is easily observed and interesting to people of all ages. Most recently, I included rainbows by sharing diagrams of how the shape of rainbows change based on the height of the sun. I followed this with pictures of rainbows and asked the students to say whether the sun was high or low when each photo was taken. 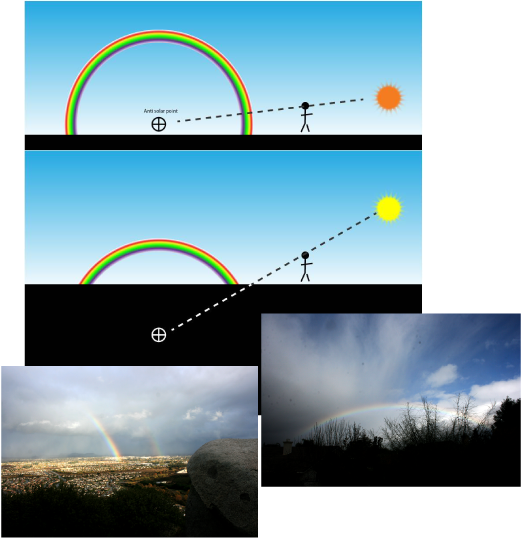 From rainbows, I show various arcs and sundogs. This picture, taken by Temecula Valley Astronomer Mike Halderman, presents many different parhelia, and so I ask students to hold up a  finger count of parhelia effects they see: 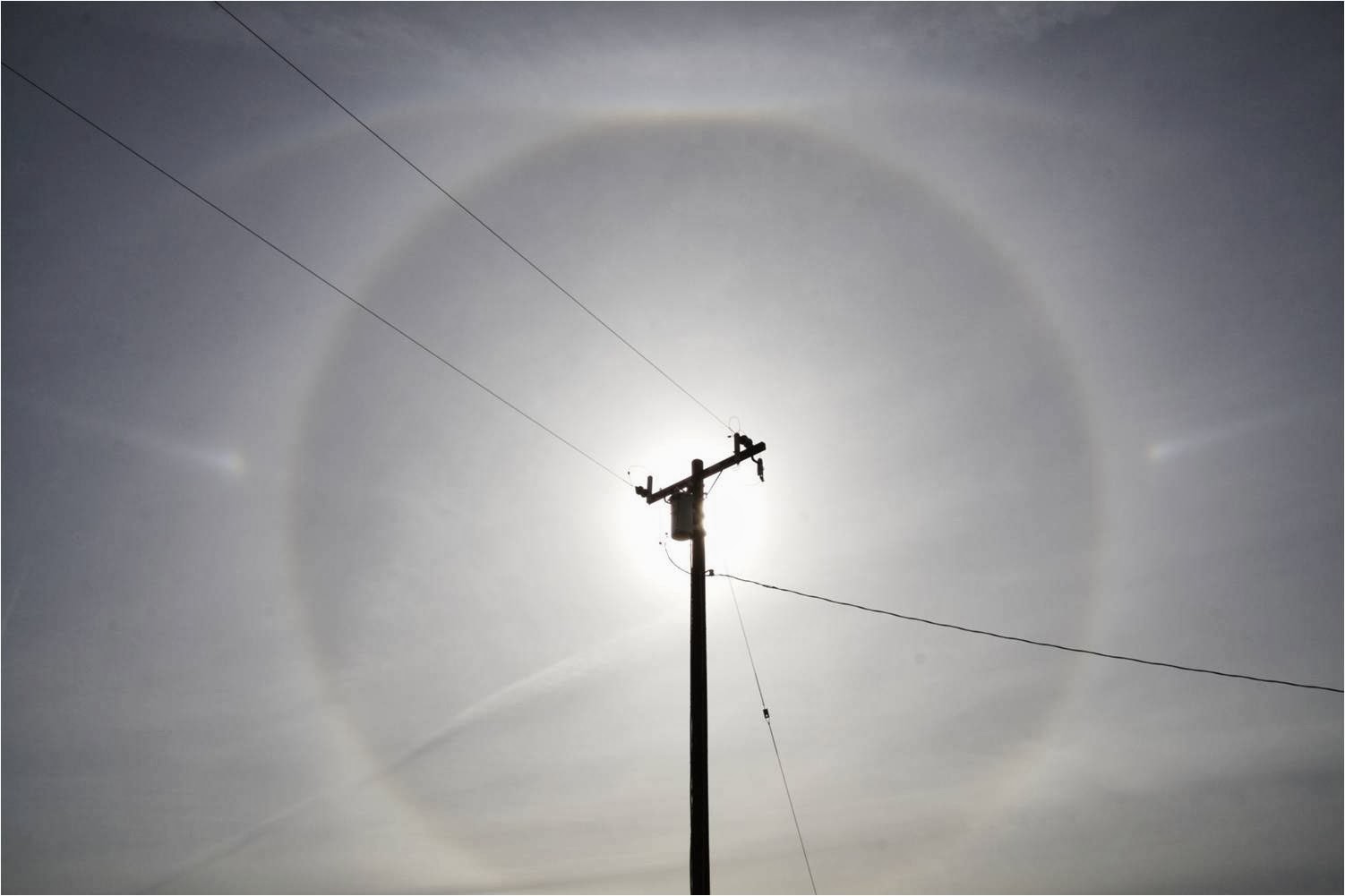 Not counting any feature twice, the highest count included 1) the halo, 2) the sundogs, 3) the tangential arcs extending right and left from the top, 4) the arcs at the top middle, and 5) the corona effect around the sun. Technically, 3 and 4 are connected, but I've seen each by themselves.

After the wonders of arcs, sundogs, and such, I show a mystery phenomenon, a circum-zenithal arc --bottom left in this collection: 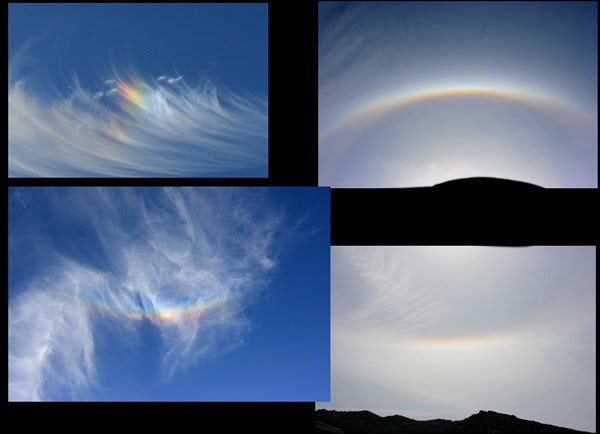 In this picture of a circum-zenithal arc, I invite all the students to crane their necks high to show where one would have to be looking to see such an arc. 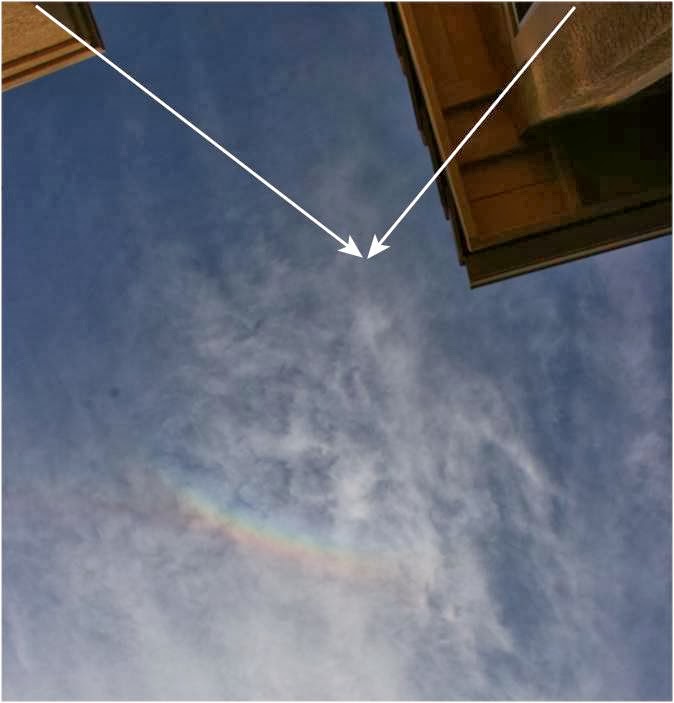 At the end of the parhelia, I share these two photos and tell them that they have a lot in common, which we explore when we cover the moon and the lunar eclipse: 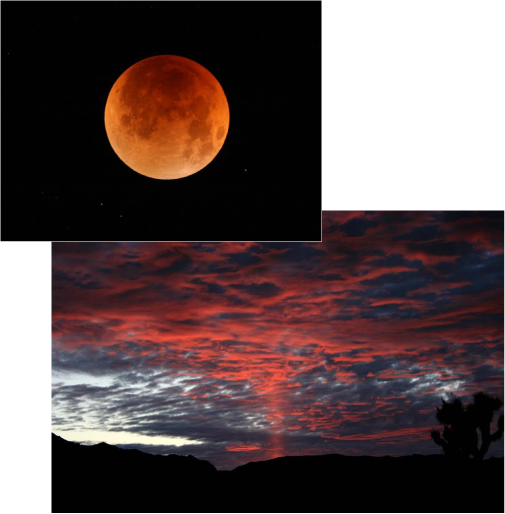 The color of the moon during a lunar eclipse is caused by the same effect that colors the sky at sunrise and sunset. But, the photo of the sunset above includes a sun pillar, a column of light that is bent around the horizon. The sun pillar picture shows two phenomena: 1, that the atmosphere can filter out the blue light, leaving mostly the red, and 2, that the light is literally bent by the atmosphere, as that is what produces the column.

From this point I bounce around other topics, showing constellations, the solar system, the moon, and the eclipse, and some newly discovered exoplanet systems. One comparison I'm proud of is that since creating my exoplanets show several years ago, I've been sharing this with the students:

I tell them that when I was their age, we know of only 9 planets. But since 1993, over 800 have been confirmed around other stars, and that by the time they are in college, they may be doing the analysis that identifies what these planets are made of based on how their atmospheres affect the light from their stars (as we showed with the parhelia).

So, for several years, I've been implying that these students are "generation exoplanet" as recently coined by NASA's spokesman, Neil deGrasse Tyson: