The Murrieta library is offering a star party on January 30, 2012. The event is free and open to the public.
The event begins at 6:00pm with a brief indoor presentation followed by star gazing in the courtyard. The event will end by 7:30. The presentation and telescopes are provided by the Temecula Valley Astronomers.

Weather permitting, the moon, Venus, Jupiter, the Orion nebula, and the Pleiades will be highlights. A show will be at 6:00 regardless of weather, so anyone making the trip will be treated to a science-oriented presentation suitable to elementary and middle school levels.

I thought a few of the first blooms I observed last week on the Santa Rosa escarpment would turn out to be outliers, that is, individuals blooming so far ahead of the rest of their species that they are not good indicators of a first bloom for the species. This week I observed new individuals blooming for purple nightshade and monkey flower, suggesting that both of these species are beginning to bloom. Hoaryleaf ceannothus is also building up to peak. I estimate that this plant is about 50 % of the crest we can expect in the next two weeks when the hillsides will become white with this bush. Already, the lilac smell is quite strong. It should be noted that a couple years ago, this species experienced a significant die off.

Last week I thought my manzanita photo represented an individual not quite in bloom. This week I saw no progress amoung the manzanita blooms but a lot of listless blooms. I wonder if I missed the peak of the manzanita. 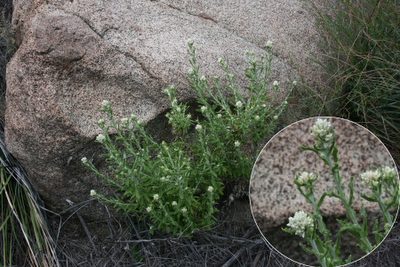 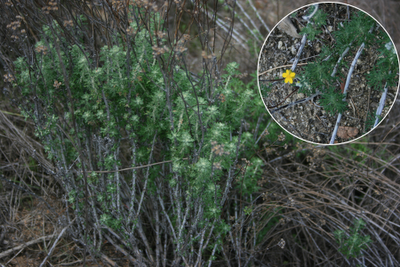 Unidentified: I see a lot of this plant, so I shouldn't have trouble identifying it soon. I observed multiple individuals starting to bloom. 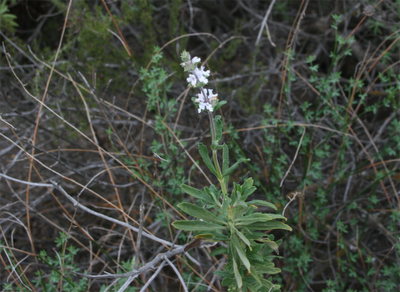 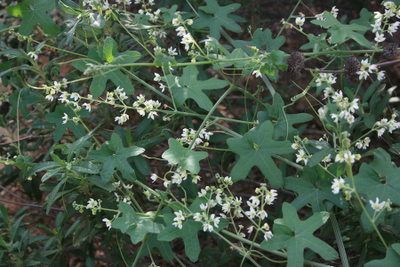 Wild cucumber; I observed many individuals in bloom
Other developments of interest, though not necessarily blooms: 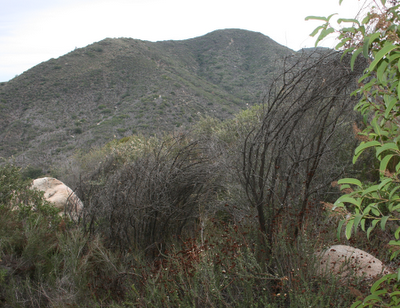 Dead hoaryleaf ceanothus. The gray color of the distant hillside (left side of the picture) is due to numerous dead members of this species 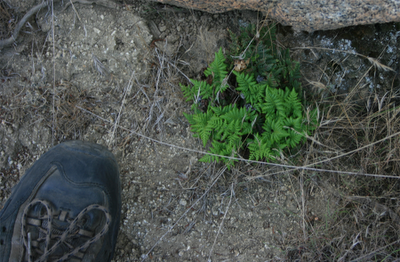 First sprouting of a fern that grows in rock crevasses throughout the escarpment. I've never seen a bloom for it, so I'll follow it's yearly growth instead. 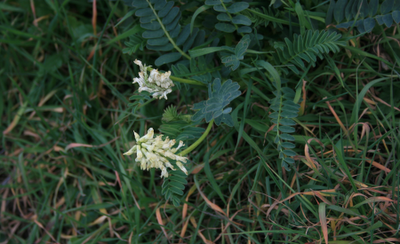 First bloom of locoweed. I don't see this plant on the escarpment; it occurs in a disturbed area on the approach to the escarpment 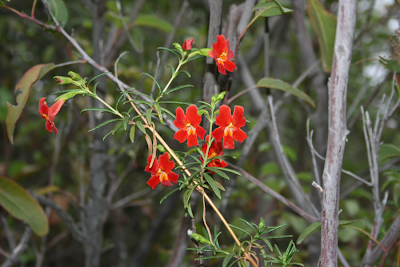 In my last two posts, I allude to protecting the natural landscape. This year, I'll try to document this landscape as its plants resume their growth. I hike the Santa Rosa escarpment frequently enough that I should be able to record the first blooms of the various plants. This series will continue till new flowerings stop, which could be as late as July.
In January, I'm seeing the transition of Autumn into Spring. On January 8, 2012, I saw the first flowerings of these plants:
﻿ 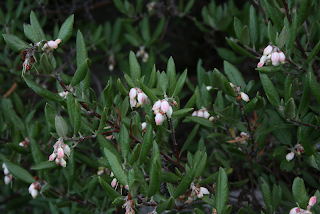 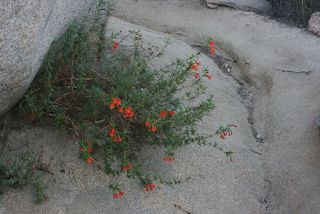 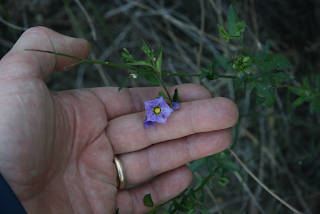 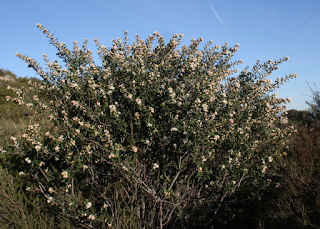 Ceanothus (Hoaryleaf Ceanothus, Ceanothus Crassifolius)
jg
Posted by jg at 8:40 AM No comments:

On July 3, 2009, I was hiking up the Santa Rosa escarpment and saw a smoke plume three miles away. The plume was from a brush fire, small by California standards. The fire stayed small because firefighters and aircraft quickly arrived to put the fire out.

The firefighters were protecting the very homes that provoked the moratorium on construction on this ridge(seen in the 3rd photo below). Two weeks later I photographed the area. The photos below can be spliced together for a complete picture of the scene. They show homes on the ridgeline, some recently built or under construction, and a burn line that stops just short of these properties -- a testament to the concern and quality of state and county fire fighters. 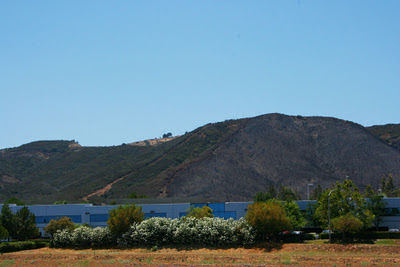 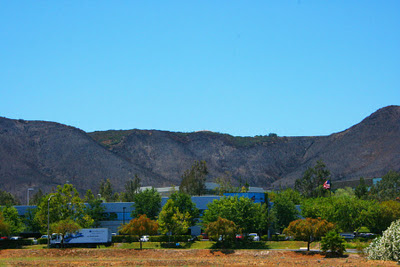 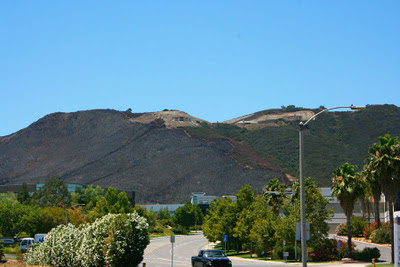 The Californian reports that the Riverside County Board of Supervisors has lifted the moratorium on construction on the Santa Rosa Ridgeline:

I'm disappointed that no plan to develop protections for this scenic area was made and that Supervisor Stone's suggestion to create an ordinance was not supported by the other supervisors. Controlling development on the ridgeline, and the broader issue of view-shed protections, brings up the issue private property rights. As reported, many citizens whose homes or plans are affected by the moratorium and would-be ordinance cite the intrusion on their property rights. Yet these same people, because of their location, are highly dependent on services from the county and state. Below is my collection of recent fires on the Santa Rosa escarpment.  (Click for full size) 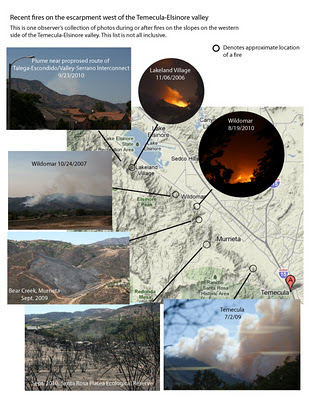 Fire fighters take great risk protecting homes on top of these hillsides, where steep hills, a hot and dry climate, strong updrafts, and shifting winds make for exceptionally dangerous and unpredictable fires. Three times in the past 4 years I've watched airplanes drop fire retardants to keep hillside fires from overtaking homes on these slopes. I can’t image that the small number of property owners could ever maintain the fire-fighting protections they need. (I could add road construction and other services to that list.) In light of these risks and services, it's not asking too much for residents on these slopes to work within some aesthetic guidelines.

One homeowner commented about having to look at the red-tiled roofs of the valley. I believe this was a rhetorical point and not to be taken as his thoughtful opinion, but it is a fair consideration. I detest when a developer destroys the natural contour of the land in the valley or above it. But if this resident truly doesn't want to look at the houses in the valley, he should build a ways back from the edge, which is what a view-shed ordinance would require.

I took these photos of a sundog and circumzenithal arc over my Christmas holiday. I think the sundog is the best ever, meaning most colorful that I've captured: 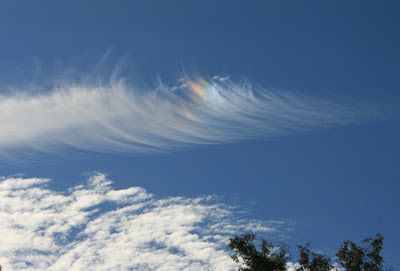 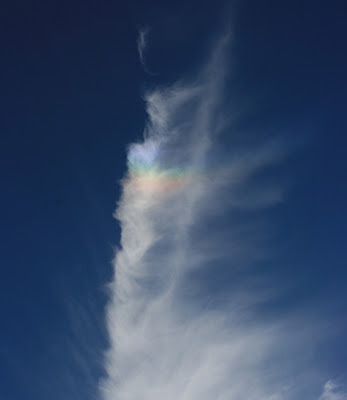 Circumzenithal arc: a fragment of the arc in a condensation trail.
jg
Posted by jg at 1:03 PM No comments: