A Good Day for Sundogs and Better for Halos

Where I live, May usually brings 90+ F degree days that makes seeing the rings and arcs from atmospheric ice crystals rare, but this May has been unusually cold , making for some great halos. I saw this one yesterday: 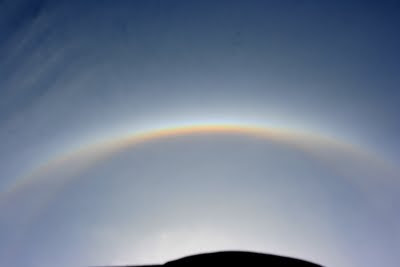 Colorful arc with ends that split on the left and right.
Lower center is my hat blocking the sun. 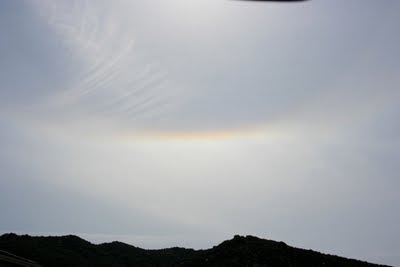 The lower section of the arc was not as bright nor as colorful.
My hat is barely shown at the top, where it is blocking the sun.
Most 22 degree halos I see have little color and are a single halo, rather than a split halo shown here next the sundog: 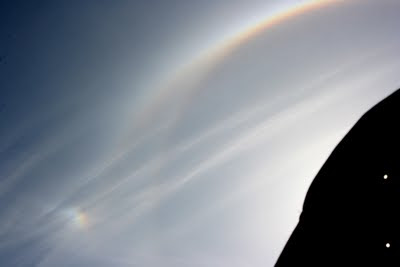 Sundog, outer ring, and inner 22-degree ring. The outer ring leads into the sundog,
suggesting some common optical property at work.
According to Atmospheric Optics, the sundog gets closer to the inner, 22-degree halo as the sun is lower to the horizon. These photos were taken around 3:30 PM, when the sun is still rather high in the sky, and accordingly, the sundog is noticably out from the 22-degree ring.
This ring was also observed by a friend and fellow sky-watching enthusiast who took this photo, probably a mile from me: 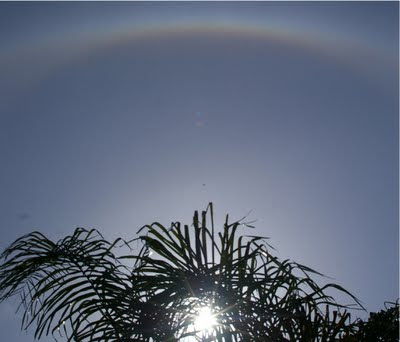 Photo by Shaun Brodie
Shaun's photo is a bit more useful in that he included the sun, from which we can trace the arcs of the two rings. Shaun duplicated and rotated his photo to create an extension of the ring. He manipulated the contrast and then drew the approximate tangents that conform to the outer ring. 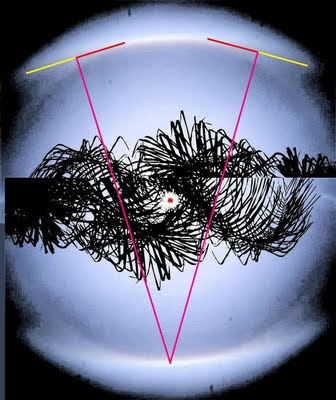 According to Shaun, "The center of the secondary arc lies on the circumference of the arc/circle around the sun." I took a slightly different approach and agree with his conclusion: 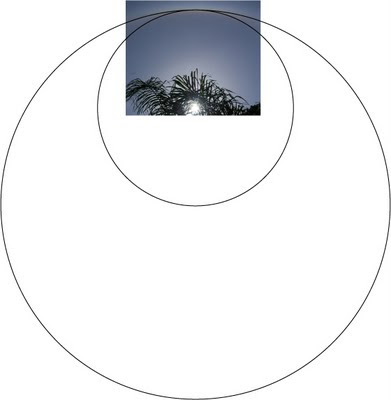 An update(24 May): Per Atmospheric Optics, the outer ring is a circumscribed halo, which is also the high sun version of the upper and lower tangent arcs:
Circumscribed halo

I guess this is what you do on blogs

Whenever one corresponds via others' blogs, and the correspondence leads to discussion, controversy, and vitriol, one provides links. I'm not sure if I'm getting my vitriols yet, but there's still time.

I've been following a local blogger and satirist since discovering 1) he can be funny, 2) he leaks the views of a former council member whose civic knowledge I respect and admire, 3) he has shown some pro-city, pro-community attitudes, and 4) he offers a contrary opinion. Though sometimes I've applauded the contrary opinion, often I don't agree. Regardless, I enjoy hearing it, and I have a scientific curiousity about people with contrary opinions.

Since he's outed me as a reader, I'm committed to the quality of his blog. So it was in this spirit I commented on his interview with an activist whose litigation overturned a $28-dollar yearly assessment for the maintenance of our community's parks:
The Provocative Interview

Having participated in the reopening of parks through my position on a redevelopment committee and through other community activities, I took umbrage to the portrayal of our local litigant's motives and his characterization of members of the Parks Committee. My rebuttal is here:
My response

Our litigant replied to my statements here:
The interviewee's response

And I'm awaiting the posting of my rejoinder which I'll share (when posted).:


Steve's explanations are consistent with what I observed, and I was careful to qualify my inferences as inferences. We can't know the thinking behind others' overt behavior. (Is everyone with me on this?)

I struggled to not let later events rewrite my memory (e.g., Steve's opposition to incorporation and to the parks assessment). I hope Steve has exercised similar scrutiny.

Regarding Steve's humor, which I enjoyed:

Steve: The neighborhood where I live is named “Parkside” Estates, not “Collegeside” Estates – enough said.

I sympathize with this. "Parkside" does imply there would have been a park. I welcome any advice on how I can contribute to making that park a reality, seven years ago as well as today. Regarding "Estates" I trust that part of the name has met Steve's expectations, as there's nothing I can do there.

Considering Steve's presence in Wildomar politics, I welcome any public record of his efforts to make the park of Park Estates a reality. I'm inclined to believe that he has made the statements I seek, but I ask because I'm undecided as to whether breaking up the parks assessment was a means to that end or intended as a punishment.

Steve raises a good question about the RDA and Marna O'Brien:

Steve: I am informed that the good people of Lakeland Village are still trying to figure out how millions of dollars of RDA funds legally mandated to be used to combat blight conditions within their RDA boundaries were used instead to refurbish Marna O’Brien Park, which is not even located within the Lakeland Village Wildomar Redevelopment Project Area. Perhaps a future expose for Zak Turango?

Actually, our minutes are public record, so anyone "still trying to figure out how [money is spent]" may be not worth reaching out to, but I'm willing to help. And, I did offer my help, as a member of the RDA, to Steve at our first meeting. I was willing to see if the RDA had any means to assist in his dispute. The RDA has since used its voice on other issues in the community. That Steve would suggest an expose reveals more of him than it will of the RDA.
Let's put forth a testable hypothesis. I may be an idealist fool or Steve may be working too hard to find fault in collective action. (Actually, I admit to being an idealistic fool, but the question is whether it's to an extent that is detrimental to the community.)

The RDA committee I'm on was elected so that the community can have a say in what is considered blight and in how to correct it. We decided that shuttered parks were a condition of blight (which raises the question of who is fighting or promoting blight).

Marna O'Brien is a half block beyond the RDA boundary. However, the RDA can invest in projects outside of its boundary if such projects benefit the RDA. For example, we are reviewing sites for a new fire station that will service the RDA zone but likely reside outside the boundary. If this is inappropriate, it's not too late for citizens to intervene. (Before you answer, please know that if there were a fire outside the RDA, I'm Ok if you want to call the station we'll have paid for.) The same can be said for community centers, flood infrastructure, roads, signals, and even the water quality of Lake Elsinore.

But back to the park... RDA residents near Mission Trails drive southwest to reach Marna O'Brien; RDA residents near Central drive northwest; and those near Grand drive northeast. We have the park surrounded! (See map.) A park with Marna O'Brien's services is a benefit to the RDA and the greater community. Forgive the cliche but we all rise together -- but I guess we can add "fail together, too"

If there is a flaw or violation in the RDA's support for Marna O'Brien, please charge ahead and investigate, but make sure you can get the whole story before undermining people's confidence in collective action. I'm available to anyone who wants to know more about the activities of the RDA since I've been a member.

And the map I sent is here (click to enlarge):

Star Party covered by The Californian

I would like to thank The Californian for covering the star party that my astronomy club conducted last week:
More than 200 turn out to star gaze

The reporter did a commendable job of squeezing the event into the limited print. She described the enthusiasm people show and their disbelief upon first seeing Saturn in a telescope -- disbelief that they are really looking at Saturn.

The reporter attended one of the three presentations I gave, and she captured the cross-section of observing and astronomy that I share. It's always interesting to see what sticks and makes it into a couple sentence summary:


Wearing a shirt that read "Science rules," Garrett talked about meteors, planets, the moon and its orbit, the large telescope at Palomar Observatory, and the best time to see Mars in the sky.
"Mars is really tiny," he said.
He also explained to students and parents how outdoor lighting, which he called "light pollution," can block views of the night sky in developed nations, and how the science of astronomy has helped scientists learn about the Earth's climate.

Though "Mars is really tiny" would not be my first choice for a quotation, I am pleased that I must have effectively conveyed the connection between astronomy and climate science. A theme from start to finish was that astronomy is not just what's beyond our planet, but contributes to our understanding of urgent topics like global climate change.  For example, detection of CO2 in exoplanets relies on the same principles as calculating CO2's increasing influence in Earth's greenhouse effect, yet global warming hoax theorists fail to include astronomers as members of the conspiracy. I hope my use of irony is clear.