For people who may be searching the web in regard to the Riverside Board of Supervisors introduction of ordinance 915 regulating light pollution (or more accurately light trespass), here are a few stories and the text of the ordinance. I will be commenting on this in the next couple weeks.

My astronomy club has assisted in the creation of astronomy clubs at some of our local schools, and we also are helping out by presenting to these clubs at their monthly meetings. I'm adapting my What's Up (in the sky) presentations for these astronomy clubs. What's good for students is probably even better for adults.

I have not always kept up this section, but I now have additional pressure to get my What's Up presentations onto my website where they can be shown to these clubs.

Below are a few star maps from the presentation that I shared with students. New ones will be available in November. 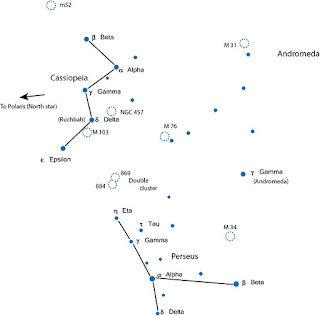 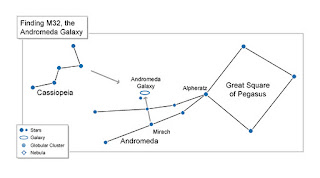 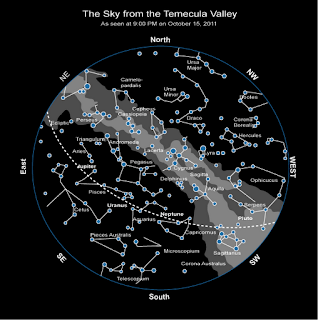 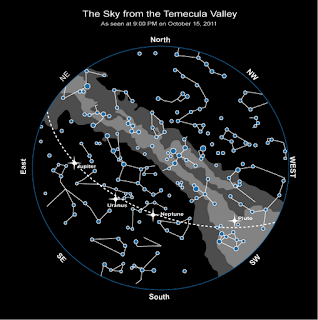 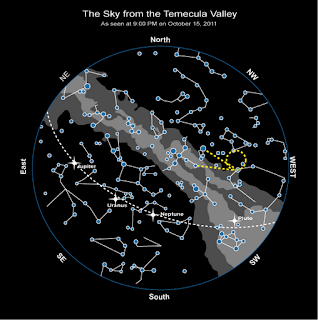 I've had the opportunity to contribute to a couple recent posts on SkepticalScience.com.

Modern scientists, following in Galileo's footsteps addresses the tactic of many climate change denialists to compare themselves to Galilieo. I drew a timeline for that post, and here I'm sharing an earlier version that we decided was too detailed and did not use in the post. This one was drawn to the constraint of their page format, and it is my plan to lengthen and embellish it. I'm sharing it for those who may wish to use it as is and welcome suggestions. 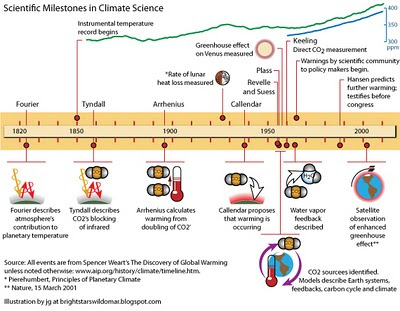 The Last Interglacial Part Four - Oceanic Influences continues the discussion of the Eemian Interglacial, which was 125k years ago when global temperatures reached a degree or two warmer than the pre-industrial Holocene. If one accepts James Hansen's estimate that the Eemian was 1 degree C warmer than the pre-industrial Holocene, then we're 3/4s the way to another Eemian with its 5-9 meter higher sea levels. I contributed the ocean circulation maps used the post.

Flock of lights over Wildomar and Lake Elsinore


We we're coming home from Temecula around 8pm, and at 1st thought, it was night skydiving but it wasn't. These lights looked as bright as stars in a long string. I don't know how else to describe it. They constantly changed shapes from long, to stretched out, to a ball, to all kinds of random formations. The lights we're long an a lot. I don't know how to describe the length and how they moved. The length was at least a mile long, easily, but formed into random shapes, went high in the sky, moved low, moved left, right. Nothing like this, I had ever seen. And it moved so gracefully. It was amazing whatever it was.

I have no idea what Megan saw, but I have observed similar motions from sky divers using lights, and I've observed the flocks of birds making extraordinary patterns in the sky. I offer no explanation, but have one relevent observation.

Skylark airport had a lot of skydiving activity Friday night. Skydiving is pretty routine, so I rarely photograph it, but I was impressed by the dispersal and diversity of motions of jumpers at 6:15 pm when I was outside, that I snapped a few photos, such as this one: 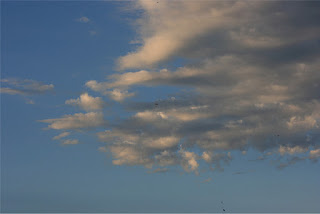 You can see their plane in the top middle, a chute in the center, and two in the bottom left doing their final spirals to the ground (click the picture to enlarge it).

What was I doing outside? Last night offered some stunning crepuscular rays and irridescent clouds: 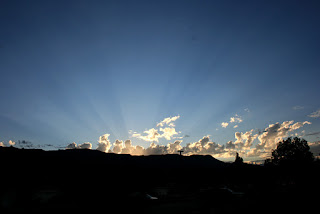 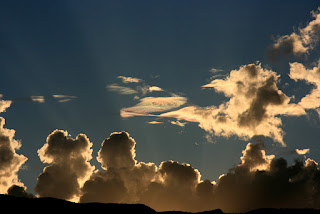 Irridescent clouds, showing purple, orange, and green colors
I welcome the observations of others, but please note that I won't be able to post comments promptly today.
jg
Posted by jg at 9:02 AM 1 comment: