What's Up February and March 2016 for the Orange County Astronomers

It's been a while since I've presented a What's Up presentation for the Orange County Astronomers, and even longer since I've blogged about it. Friday, 12 February 2016, I'm doing the What's Up and I've included here many of the illustrations I'll be sharing in this presentation. I'm especially grateful that a leap day is added to our calendar on my watch, and so I have some illustrations of the long term effects of leap days on the timing of the calendar.

The sun has some activity. A week ago, I took this photo and expected the sunspots to be gone by this weekend, but more have emerged, making this weekend a fine time to view sunspots with the appropriate safety filter: 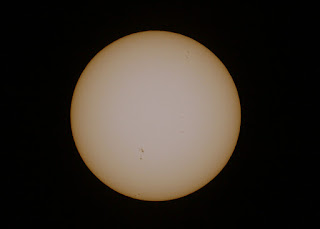 Most of our planets are near the sun making for this comparison between our view of the ecliptic between morning and evening. Notice that this time of year the ecliptic is at a low angle in the morning while at a high angle in the evening. 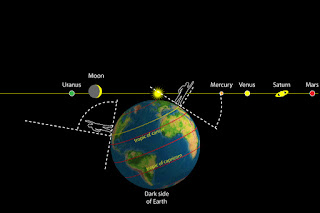 Jupiter is at opposition, meaning it rises shortly after sunset and is up all night. March 8 is the time of true opposition, a time when Jupiter will be closest and easiest to see well in a telescope. The bright object in this photo is Jupiter being jumped over by Leo the Lion: 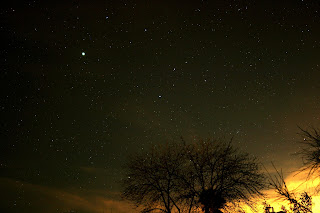 Looking North in the early evening, we have Cassiopeia forming an M shape. Just above true north, the constellation Camelopardalis hosts the faint comet Catalina: 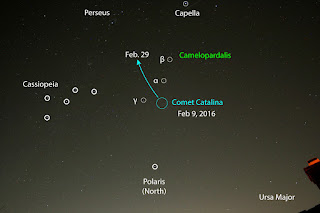 Comet Catalina is too faint to see in binoculars or wide field photographs. This object requires a telescope and is likely to appear as no more than a faint smudge.

Go left from Cassiopeia and you'll find Pegasus, which you can use to find the approximate location of Uranus and the asteroid Vesta: 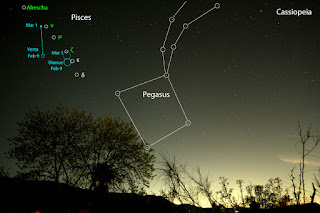 Left from Pegasus takes you to Orion and Taurus: 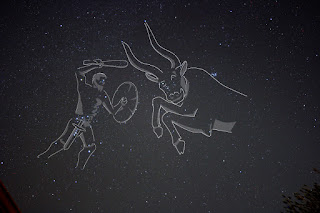 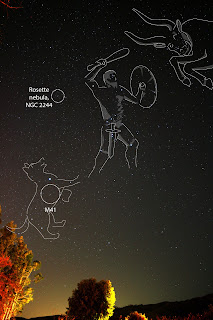 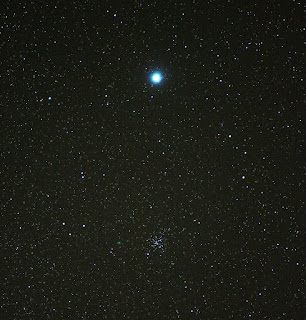 Note that the green splotch just left of the M41 star cluster is a camera artifact. It appears in a few of my photos and moved relative to the camera's field of view only when I moved the camera, suggesting some contaminant was on the camera's imaging chip. Tracing the most logical source of this splotch provided at 15-minutes of entertainment.

Overhead or Auriga, Gemini and an area rich in star clusters. 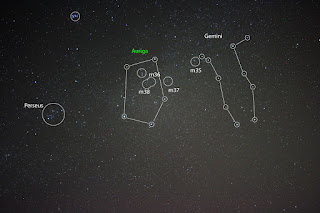 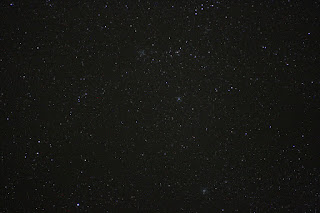 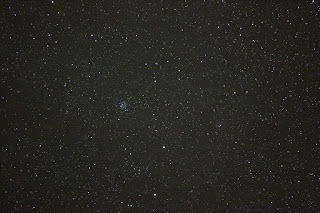 UPDATE:
During my presentation, I did a little sidetrack into the effect that leap years have on shifting our calendar relative to the seasons. I'll develop this topic further in a separate post that I'm planning to make into a presentation. A member of the Orange County Astronomers offered me a nice topic name: Shift Happens.