Granite Construction is trying to win approval to operate a rock quarry next to Temecula, CA, and within 18 miles of Palomar Observatory. I suspect the need for construction material is genuine, but so is the opposition by a broad coalition residents, businesses, and organizations of Temecula. The deadline for commenting on the project's Environmental Impact Report was yesterday, and I submitted comments on lighting with only hours to spare.


As much as a detest when commercial operations use names like "Liberty", "Freedom", or "True believers in God" quarry, the English language is public domain and the project applicants have a right to manipulate perception through their choice of name. Flipping the coin, citizens have the right to consider any impact on the region's hydrology, waterways, nightsky, scenery, and thin blanket of biology as an impact on the public domain. This right is protected in state (CEQA) and federal (NEPA) law. Anyone may comment on a project subject to these laws and will be treated as a stakeholder. Receiving a letter from the approving agency that begins "Dear Stakeholder" is to me one of our greatest freedoms and liberties.

I've reviewed Granite Construction's lighting plan. It is good in regard to protecting Palomar Observatory and the night sky -- almost too good. Therefore my comments, though awknowledging the virtues of the plan, focussed on the failure of the EIR to address reasonable circumstances that would encourage a mining operation to deviate from the plan. Essentially, if shopping malls and restaurants have trouble following the lighting regulation, why should I expect the same of an industrial operation using explosives and earth moving equipment?

My submitted comments are shown below, and as with all posts here, I welcome comments and criticism.


Introduction
As an amateur astronomer, I promote astronomy-related activities in schools throughout the Temecula Valley. I'm trying to make our communities more aware of lighting and reawaken an interest in preserving our night sky both for our enjoyment and for the protection of research opportunities at Palomar Observatory.

I have been lobbying Riverside County to update their lighting ordinance (655) to
I’ve also tested the County’s lighting code enforcement and have some observations that are relevant to the proposed Liberty Quarry.


General CommentThough the Liberty Quarry Lighting plan (Aug 2007) is excellent in regard to minimizing light pollution, there are some inconsistencies that combined with weaknesses in enforcement of County Ordinance 655, could lead to Liberty Quarry’s using significant quantities of white light should safety, trespass, or liability concerns emerge during and after the lifetime of the quarry.

My comments are based on my reading of these documents:

Specific Comments
Excellent qualities of Liberty Quarry’s lighting plan
The lighting plan describes only fullcutoff Low Pressure Sodium (LPS) and High Pressure Sodium (HPS) lights for Liberty Quarry. LPS is transparent to research at Palomar Observatory (see Figure 1). HPS does pollute some of the wavelengths that Palomar conducts research in, but it is a reasonable alternative to white light, especially when used within full cutoff fixtures. 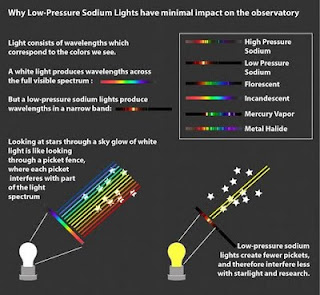 Figure 1: The above diagram compares broad spectrum white light to a picket fence that can obscure the wavelengths of light being observed. By ignoring data from wavelengths corresponding to narrow band of Low Pressure Sodium light, the observatory effectively ignores light pollution in these wavelengths


Can Liberty Quarry conduct night-time operations safely with the lighting they’ve described?In the case of any contractor providing a generously low bid, it is fair to ask whether Granite Construction can conduct mining operations with only the minimal lighting they propose. This is not an accusation of misrepresentation, but there may be extenuating circumstances that would understandably divert an operations manager from protecting the night sky to minimizing legal liabilities.

For example, how will Granite Construction respond to any of the following circumstances? 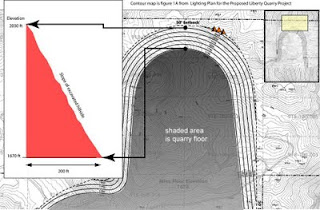 With the creation of walls this steep, it is reasonable that safety issues will arise. I believe that the EIR is deficient in not addressing the extenuating circumstances I’ve cited.

In addition to the extenuating circumstances, there are some inconsistencies and ambiguities in the lighting documents:

Page 5 of the Lighting Analysis says

Note that the Lighting Analysis on page 12 says:

portable lighting will be used to illuminate the approximately 100 to 150-foot wide segment of quarry face that will be worked at any one time.


Figure 3 shows a hillside comparable to the walls of the quarry being lit by portable lighting. 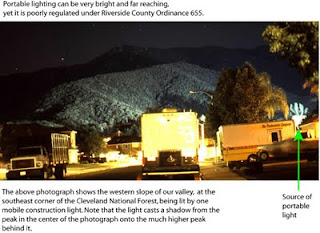 The most likely scenario for the excavation lighting using this light fixture setup is to have
the light source approximately 15 ft. to 25 ft. away from the face of excavation requiring
lighting and to have these sources spaced approximately 100 ft. apart if additional light
sources are required.
County Ordinance 655 may not offer sufficient protection from light pollution
In 2007, I submitted the observation below to Riverside County Code Enforcement: 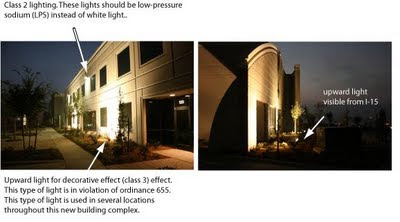 The code enforcement officer acknowledged that the observation appears to be a clear violation and also admitted that he had no experience in enforcing the ordinance. The code violation has not been corrected.

It is my fear that excess lighting from the quarry will be equally difficult to control for the following reasons:
The Lighting Analysis relies on compliance with the county ordinance and relative comparison to other light sources as proof that their operations do not affect the night sky; this is not a correct assumption. Ordinance 655 is a regulation not a scientific determination, and all light contributes to light pollution, including their HPS lights.
Posted by jg at 12:04 PM

Keep up the fight on outdoor lighting John. It is appreciated.