What goes up vs what comes down

This past weekend was action-packed, so to speak, of objects making the upward or downward trip to and from space.

On Friday, Dec. 22, the southwest United States enjoyed the launch of a Falcon 9 two-stage rocket. The twilight was perfect for illuminating the exhaust plume. From my vantage point, the event lasted about 5 minutes, from seeing the rising glow in the north until the rocket disappeared behind mountains to the west. This was enough time for neighbors to alert each other and run into the street and for friends to start texting. It was enough time for me to correct my original poor choice of camera location , run downstairs and across the street barefoot, dodge one car, and get numerous shots.

Falcon 9 launch viewed from in front of my home: 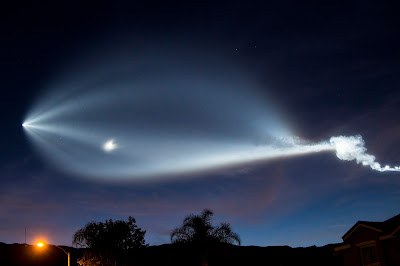 Moon, stage 2, with stage 1 falling away: 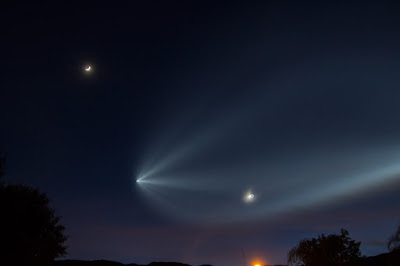 A second burn from stage 1 occurred a second after the first: 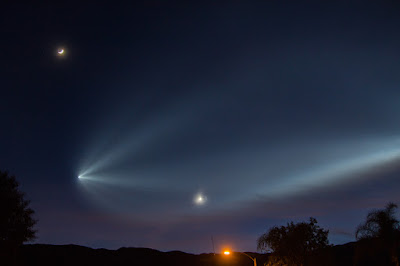 And now the downward trip:

On Christmas Eve, at 5:15pm, I saw an amazing fireball, or bollide. Like the Falcon 9 launch, the event lasted a long time, that is, long for a meteor. I was parked and about to exit my car when I saw it. I had time to contemplate grabbing my camera, and chose not to. As a result, I saw a colorful break-up and burn that reminded me of a newspaper bursting into flame and being sucked up the chimney in fragments. My wife and daughter also saw it from about 5 miles away from my location. They also reported a red color to the burn.

However, my friend Andy Abeles from the Temecula Valley Astronomers, captured it from his dash camera. The full burn is cut off by the mountains, and I think most of what I saw is where it goes behind the mountain in this video.