The Guardian on Climate Imbalance

I had a minor contribution to a recent post on The Guardian: Climate imbalance. The article discusses how research addressing climate sensitivity is handled. Climate sensitivity refers to how global temperature will respond to changes in Earth's energy budget. If you double atmospheric CO2, the enhanced greenhouse effect from this change will raise the average global temperature about 1 degree Kelvin, and that rise will sustain a higher level of water vapor, which is a more potent greenhouse gas. The increased warming from CO2 and H2O will reduce ice cover, which will mean less solar energy is reflected to space, allowing for a bit more warming. Additional feedback effects will add warming and cooling influences. Climate sensitivity estimates range from 1.5 to 6 degrees K. Note that the average temperature difference between a warm inter-glacial and an ice age is about 5 degrees K, so a few degrees K represents a significant change in climate.

To help the reader sort through the various papers cited, I contributed this illustration: 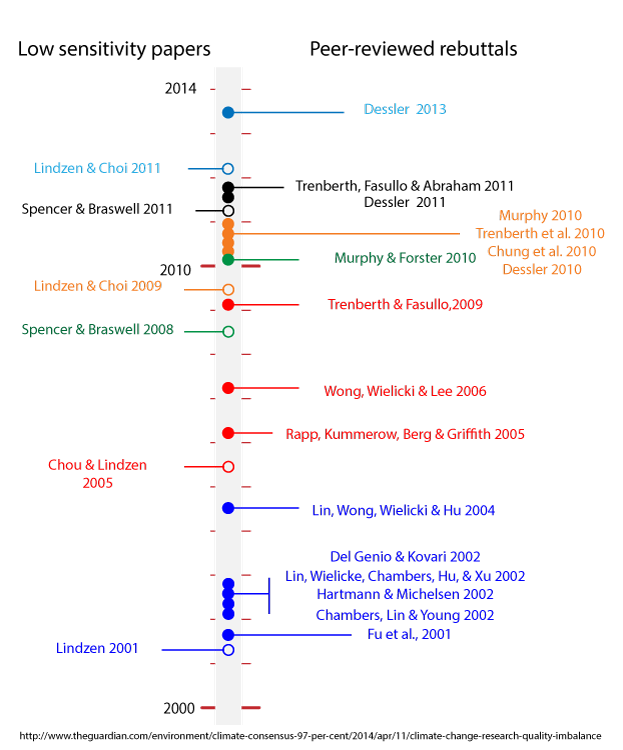 Open circles are a low-sensitivity paper and the open circles of the same color or rebuttals to a paper. My original illustration was slammed on Twitter for having an unlabeled x-axis. I intended no x-axis and added horizontal spacing to stack each colored set in it's own column. The criticism of an implied and unlabeled x-axis was embarrassing but fair, and I quickly responded with an "oops, may bad; how's this new drawing?" Within the day, I had a corrected version. What I find interesting is how Twitter enabled me to communicate with a scientist who read the Guardian post and get an illustration quickly corrected.

This Guardian article came out a convenient time for me to share with my city council who are considering a climate action plan for Wildomar.

By the way, I'm on Twitter under the name @jg_to, where I'm likely to make errors and correct them again.