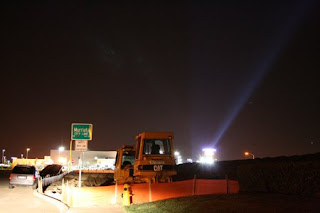 In March, 2008, Murrieta Valley Mitsubishi started using search lights to advertise. This use of searchlights is occuring within 30 miles of Palomar Observatory and is a violation of Murrieta's municipal code (from see Section 16.18.100, Lighting; G. Prohibitions; 4.: "Operation of searchlights for advertising purposes is prohibited.").

Aside from the violation of municipal code, this activity if offensive to amateur astronomers and to anyone one who enjoys the night sky. Mitsubishi is essentially saying that the sky is their advertising space.

Mitsubishi should be reminded that amateur astronomy is quite alive in their community. Each year, local astronomy clubs set up telescopes for thousands of visitors. A star party for a local cubscout pack is planned for March and another for the entire community in two months. Do they need Mitsubishi's permission to use the sky these nights?
It should be noted that while taking these photos, no customers came or went. But of course, it's hard to prove a negative. 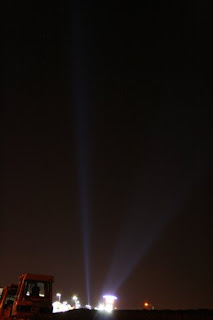 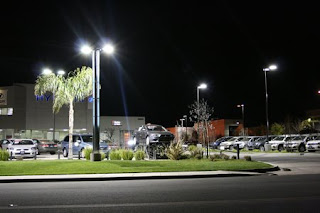 An update: It turns out the star party for cub scouts did need permission to use the sky. The floodlights were quite prominent during the event. Thankfully, Murrieta Mitsubishi has stopped using the searchlights.
Posted by jg at 11:53 AM 3 comments: