I'm involved in a variety of star parties this year that are open the public.

May 5: Dennis Mammana's Planetpalozza: This is held in Borrego Springs by astronomer and lecturer Dennis Mammana. There is a cost to admission which covers dinner, lecture, and observing from the late afternoon on May 5 to the early morning on May 6. See the link for information and to make reservations.

Explore the Stars: This is a monthly, free event sponsored by the Forest Service and held at Observatory Campground, near Palomar Observatory. Typically, the event is for people camping, but some people drive up the mountain for the evening. A presentation is at dusk in the amphitheater, followed by star gazing. See the link for directions and other information. The dates are as follows:

Hopping to admire the camouflage

"Hopping" is a pun on the title of my previous camouflage post (stopping to admire camouflage), and appropriate, as this time I'm celebrating a  frog (or toad -- identification pending). Here he is on a rock of granite that creates a natural pond referred to in my region as a tenaja. 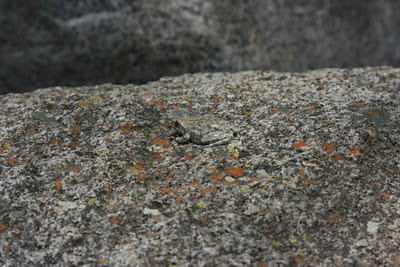 The canyon I visit can be accessed by hopping from rock to rock -- no pun intended. Crawling through the banks puts you in tangles of underbrush which include poisen oak. Along with the camouflage of animals, I also admire the tenacity of plants that cling to the stream bed: 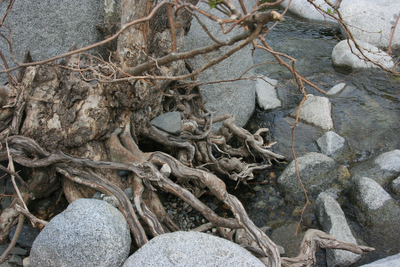 Above: a California sycamore with most of its root base exposed. The tree still lives, as it tendrils reach down into the bed. Notice the rock it's cradling (about mid center); I wonder how long the exposed roots have been holding this stone. 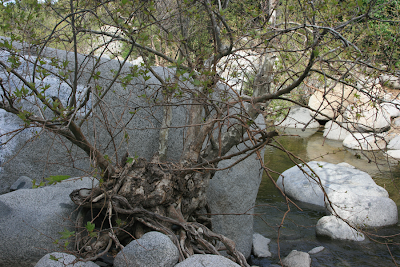 Above: a more complete view of the same tree. 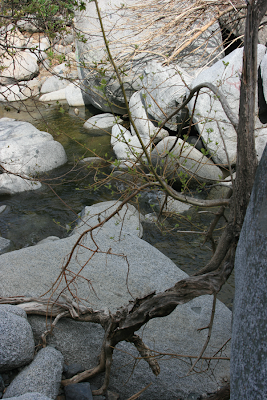 Above: Another tree with an apparent tenuous hold on the bank. 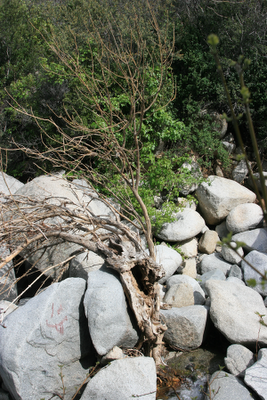 Above: I believe this one to be a willow, quite thrashed by the winter rains (we have no snow melt here -- mediterranian climate -- most of our rain fall in the winter and spring months). It's leaves haven't sprouted yet. The green behind it is from a poisen oak. 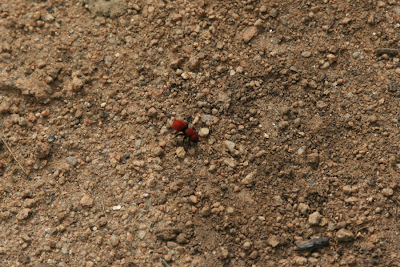 Above: A velvet ant observed away from the stream.These are about the size of a honeybee and are definitely not camouflaged. 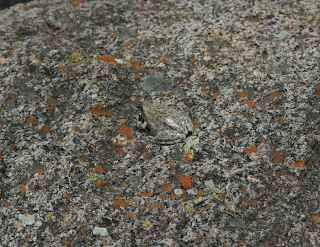 Above: one more look at the frog that inspired this post.
jg﻿
Posted by jg at 12:54 PM No comments:

I can always tell when an astronomical phenomenon is getting media attention, as friends start sending me notices. This month was a "super moon", a term I hadn't heard before. It describes a full moon occuring near the moon's perigee -- it's closest point to Earth. Therefore, the full moon at perigee should appear larger than any other full moon. As full moon occured at 11:10 am my time (Pacific Daylight Time), and perigee at 12:09 (PDT), I had no chance of seeing the super moon. But what I would have seen, had I been under clear skies at the other side of the Earth, would not have been much different from what I  see every few years when the full moon is within a day or two of perigee.

Below are some photos I took in the days before and after the super moon to which I added a blue outline for ease of comparison.

Thurs., 17 March, about 40 hours before the full moon (evening photo): 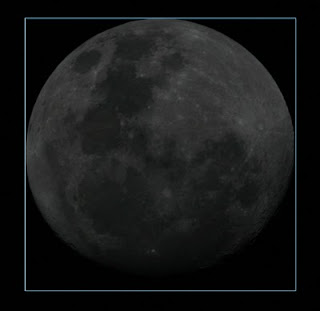 March 18, about 34 hours before perihelion (morning photo; so the moon appears upside down) 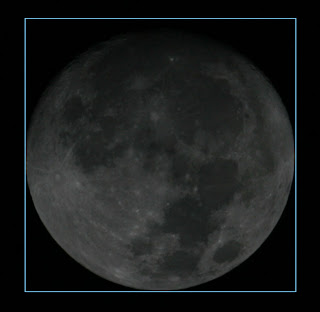 March 18, 14 hours before perihion (look closely, this one appears larger than the previous two): 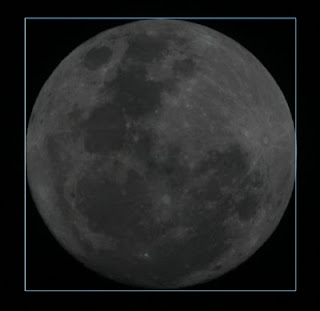 Hint: Look closely at the right side. The moon 14 hours before perigee fills the box and extends into the blue line on the right side, where the previous two images leave a few pixel gap.
Weather interfered with my next opportunity, the morning of March 19, when I could have photographed the moon perhaps 8 hours before perihelion. Weather interfered again the following night 7 hours past perigee. I was able to photograph the moon, but the conditions clearly show my image as unreliable or comparison: 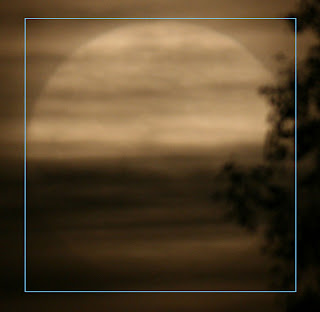 And here is my last photo in the series, taken 10 hours past perigee under a cloudy sky: 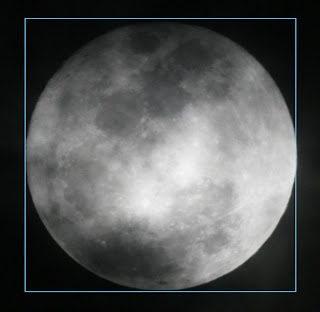 We see little difference in size from 40 hours to 14 hours before perigee, suggesting that another14 hours later wouldn't have shown much increase in size, had I been able to photograph then. I can always photograph a gibbeous near and at perihelion to confirm my guess, a project I'll enjoy doing when perigee occurs in evening hours at my location.
So, the super moon most of us missed appears just as big and just as bright as the more frequent "almost super moons" we see every couple years. This October, however, full moon will appear near apogee, the moon's farthest point from Earth. Weather permitting, I'll photograph that one too. The difference in size with this one should be striking.
jg
Posted by jg at 7:26 PM No comments:

Since having the honor of sharing my data viewer project on Skeptical Science, I've been working on a list of feature requests. I think I have most of the features requested in place and will improve their usability as I find time. I just added an important feature: the ability to flag specific data points for comparison.

For example, you can click the highest data points for CO2 levels and horizontal and vertical lines will mark the point in the same color as the graph that was clicked: 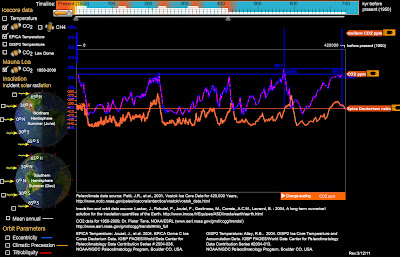 Then, if you rescale the x axis, say to zoom in on the Holocene, you can see the y values of the data points you flagged from 323 k and 414 k years ago: 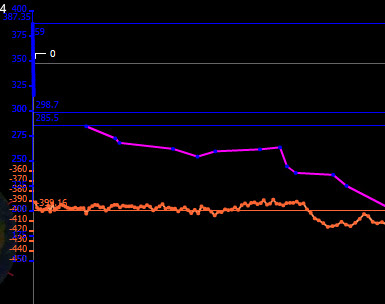 As always, I continue to take requests for features. My next big change (I hope) will be allowing multiple views of the x-axis timeline, so you can directly compare the shape of graphs between different time periods. My data viewer is available here: Epica-Vostok viewer.
jg
Posted by jg at 10:08 AM No comments:

Seven years ago I observed the zodiacal light, which appears as a faint triangular glow from the horizon up along the ecliptic. This phenomenon is visible only at dark locations; I observed it from eastern Arizona where I could look out over New Mexico -- best dark sky I've ever seen. Here is a photograph of my color slide I took at the time (a digital photo of a film original): 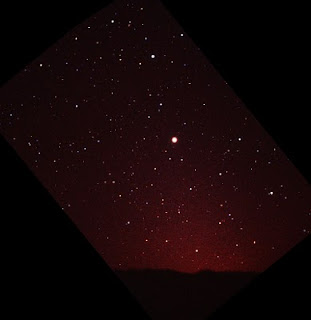 Zodaical light; the bright star in the middle is Jupiter
The graininess in the photo is from the fast speed film I used (200 ISO), not knowing at the time that faint phenomena requiring minute or longer exposures appear best on slow-speed, low-ISO film. Though graininess shows as noise in digital photos at high ISO settings, a good digital camera doesn't have the film equivalent of reciprocity failure -- the tendancy for high ISO film to quickly lose light-sensitivity during a long exposure.
With the approach of March, northern hemisphere observers are reminded to get their best views of the zodiacal light by watching for it in the west 90 minutes after sunset. As my only observation was near the autumnal equinox while looking east, I wanted to determine if both morning and evening offer similar views at this time of year. (Short answer: they don't.)
Below I sketched the viewpoint from behind Earth, looking toward the sun at this time of year: 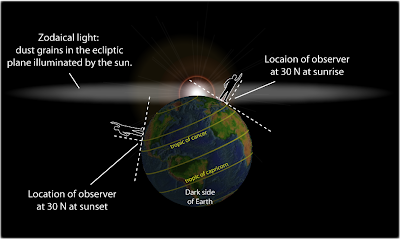 I drew the Earth large enough to show the latitudes but too small to appreciate that any observers horizon is perceieved as flat, so I added the dotted lines. And the viewpoint is slightly above the Earth-Sun plane to provide better context of the locations of the sun, earth and brightest zone of zodiacal light. Notice Earth's tilt and how the same observer at evening will have a different orientation to the ecliptic (zodiacal light) in the morning.

In the next illustration, I centered Earth so that it covers the sun. You can see how angle of the observer's horizon in respect to the ecliptic changes from evening to morning: 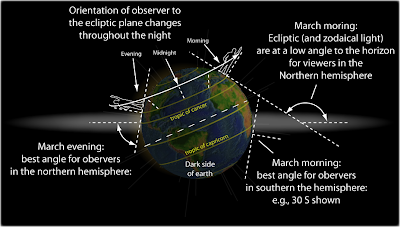 Though you can see how the angle to the ecliptic changes as we rotate on our tilted world, the scale may give a false impression that we see less of the zodiacal light's brighter center  in the morning. More likely, we see the phenomena lower, along the horizon, where it's harder to distinguish from haze and skyglow.

The following diagrams strike a compromise between Earth perceived as a  flat horizon and the circle that shows our latitude.
Imagine this view at sunset: 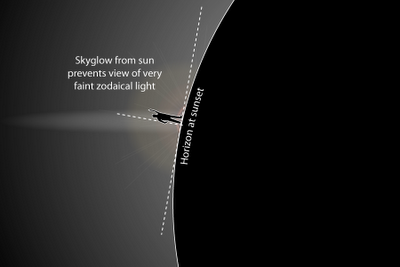 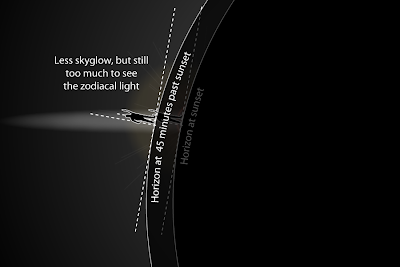 As the Earth turns, the horizon blocks ever greater amounts of the skyglow, till about 90 minutes after sunset, the skyglow is effectively blocked while enough of the bright center of the zodiacal light is still visible: 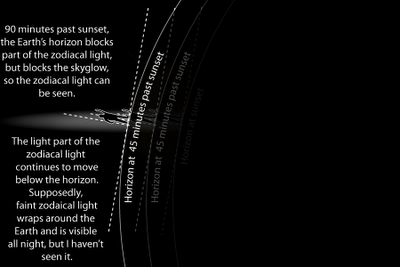 My guess at what the same bleary-eyed observer (in the northern hemisphere) would see in the morning sky is this: 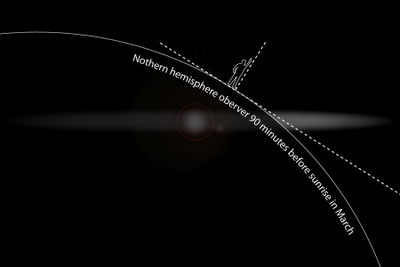 Such a faint effect is easily lost that close the horizon.

Which gives me my next problem. since Los Angeles obscures the night sky to the west of the most likely darksky observing locations I have, I'll wait for Autumn to get some eastward, morning views.

And last, by accident I filled my photo with black, but before undoing, I saved a copy, as I like how the accident accentuated the zodiacal light: 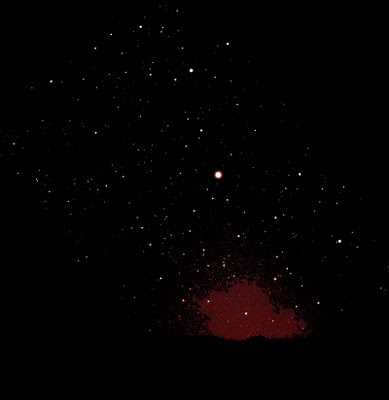