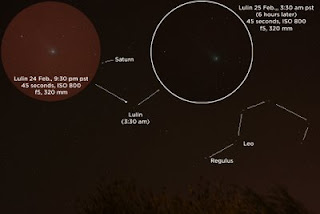 The 2/24 image was compromised by both light pollution and haze. Six hours later, the haze was still there though Lulin was above it, but more important, there was less ambient light at 3:30 AM.

Though the contrast between the two photos reflects weather conditions and height above the horizon, it also illustrates what we would have if our community fails to restrain the unnecessary upward pointing light. Contrast is everything to such an image and it is the first thing that is lost when too much light is shining upward.
Posted by jg at 12:18 PM No comments:

An illustration based on Ray Pierrehumbert's Principles of Planetary Climate 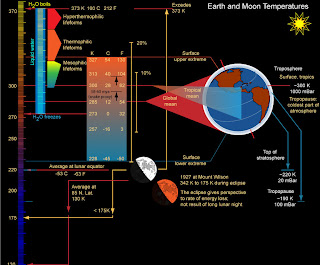 Ray Pierrehumbert's book Principles of Planetary Climate (forthcoming from Cambridge University Press) should be mandatory reading for anyone wishing to express an opinion on global climate change. (My comment is a bit unfair and hypocritical, as I expressed opinions before reading it.)

The underlying theme of all illustrations and comments I'm making on climate is that lay people (non-scientists in this context, like me) should take it upon themselves to sample the primary scientific literature on subjects that get politicized, such as climate change and evolution. Reading a real science journal reveals how science is conducted and the consensus of opinion, while it supports science through a paid subscription.

Sampling a scientific journal for a specific topic is a bit like drilling wells. Each well reveals the layers of rock below it. You can compare wells and infer the extent of various layers, but there is a lot of information in between that is missing. Ray Pierrehumbert's book was like seeing a geological map for all the holes I drilled reading the journal Nature.

The illustrations above and below are from my notes made while reading the first chapter of Principles of Planetary Climate. The first chapter is written to a broad audience, and therefore, it alone should suffice as mandatory reading. These illustrations are part of a presentation I'm preparing for the Temecula Valley Astronomers on astronomical forcing on global climate. 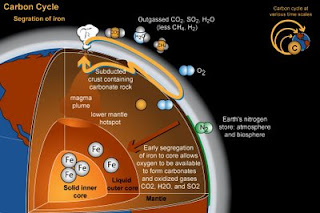 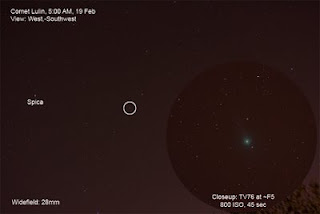 Above is comet Lulin on 19 Feb. I took a wide-field exposure of about 1 minute to show where it is in relation to Spica, the brightest star in the southwest at 5:00 am. The close-up view is through my 3-inch scope and is a little brighter than what you'll see in typical 7x50 binoculars.

Lulin is bright in binoculars and very easy to find.
Posted by jg at 12:33 PM No comments:

Update: I revised the graphic below to include source references and created an animated version of a the effect of diffuse light. Updates are available here: 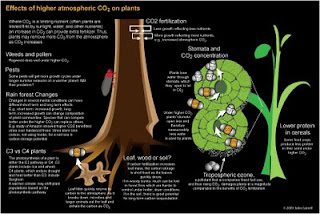 Combining my interest in CO2 emissions, climate change, and botony, the above illustration summarizes some research on the effect of rising atmospheric CO2 levels on plants. I plan to animate this illustration, at which time I'll elaborate on the research. Look for the animated version on http://www.brightstarstemeculavalley.org/

Climate, Big Picture, a question I wish I could ask 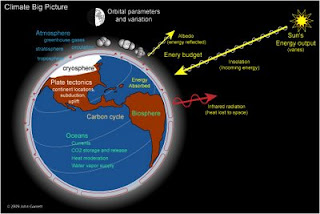 The above picture is my take on the big picture of climate change science. I find this subject fascinating in part because of the implications to our society (eg., threat from global warming to extent to which people will disseminate disinformation) and that it connects with nearly every topic of earth science that I find interesting (e.g., sun, orbits, glaciers, geology, oceans, chemistry, biosphere). Climate change unites everything that is scientifically interesting to me, and so I'm trying to collect everything I read in a set of illustrations with the above as the main organization.

Any comments are welcome. More illustrations will follow.
Posted by jg at 12:35 PM No comments:

A TVA member recently asked Who is the greatest astronomer of all time? Criteria is wide open.
It is difficult to choose a greatest astronomer. One can start by comparing what various astronomers did with the equipment they had. For example, Tycho Brahe did his work before the telescope, and his data were used by later astronomers. Even Hipparchus, from ancient Greece, managed to figure out that Earth precesses. This was quite a feat for the time. Not long ago I read a book of the discovery of parallax. The astronomer who solved the problem, I recall, had to evade conscription into Napolean's army. Another example of rising above the times.
Another TVA member wrote: "The greatest observer was William Herschel. Nobody else is even close. He discovered Uranus, the first planet beyond the classical five (plus Earth) that had been known since humans first looked up from the savannahs of Africa. In addition, Herschel observed and recorded thousands of deep-sky objects. His list formed the basis of the New General Catalogue, or NGC, which is still the basic set of objects investigated by both professional astronomers and amateurs. His sister, Caroline, should receive some joint recognition, since it was she who wrote down his observations as he teetered on a ladder at the eyepieces of his homemade reflectors. The most important astronomer was Galileo Galilei. Probably someone else -- probably someone did -- would have turned a telescope to the sky, but he's the one who did it and simultaneously had the scientific awareness to write down his observations. With his first few observations, Galileo overturned thousands of years of superstition and speculation and started mankind on the road to learning what's really up there."
In addition, I would add this article from Nature:
http://www.nature.com/news/2009/090206/full/news.2009.81.html
The article also mentions using citation as a metric. Many theories get published, but knowing what is current and valuable requires some sense of the amount of citation it gets in credible publications. The scientific community follows the citations, but the popular media and public often don't, which leads to common misconceptions on certain topics (e.g., global warming and evolution).
Posted by jg at 8:02 AM No comments: 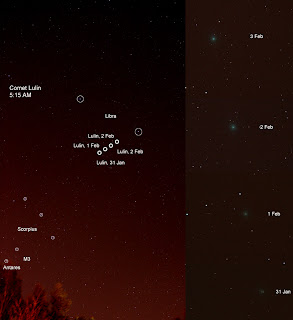 The image above shows comet Lulin in the morning sky from 31 Jan 09 to 3 Feb 09. (Click the image for a larger view.)

The widefield view was taken with a 28mm focal length lens. The mosiac of closeups on the right were taken with a 3" refractor, focal length 380 mm (~F5.2). The photos from 2 and 3 Feb were taken with ISO 800 and 45 sec exposure. The images from 31 Jan and 1 Feb were shorter exposures, so any impression that the comet has brightened in these photos is due to inconsistent exposure times.
Posted by jg at 1:43 PM No comments: