A star blew up 37 million years ago, and we just noticed

The amateur astronomy community is somewhat aglow over the opportunity to see and photograph a supernova in the galaxy M51: 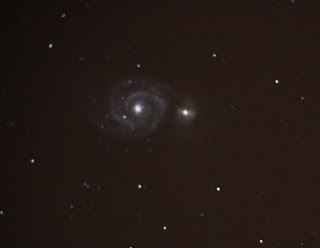 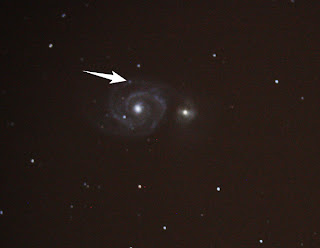 The little dot marked by the arrow in the second photo is the supernova. I took this photo using a Canon Digital Rebel SLR attached to my 8" schmidt-cassigrain telescope reduced to an F6.3 focal ratio. The photo is a 5-minute exposure at 1600 ISO, and the camera is a bit noisy at this speed. I did not guide the photo, hence, you'll see slight elongation of the stars.

Better photos, taken at longer, guided exposures, and then processed via computer, will appear all over the Internet. Though no where near the quality you may see, my photo illustrates two aspects:
1. It shows that any amateur can get a photo of a supernova, something that most of humanity has never seen, using a common camera with a slightly less common telescope and mount. For a few thousand dollars, you could have the same photograph.
2. My photo shows about what I saw when looking at the supernova on June 3/4, 2011, through a friend's 25-inch telescope. Very few people have a 25-inch telescope.

The irony is that right now, the more scientifically valuable contributions from amateurs are those images taken before the supernova. The amateur astronomy community is being asked for any images that can narrow down the time between May 30 and June 2 when the supernova first appeared. I took my first image of M51 one month ago, using a 3-inch telescope. I pointed my camera at M51 on a whim, just to see what I'd get. Here are the before and after: 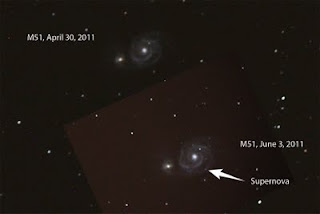 For more information on contributing images of M51, see this post at Palomar Skies: amateur-astronomers-can-help-ptf-study