Dyson's Sphere of Influence, Part 3: The Garden of Eden

One thing that scientists and conservative Christians may agree on is that there was a garden of Eden six thousand years ago; however, they may not agree on it's location nor its size. The garden I speak of is what is now the Sahara Desert. Ray Pierrehumbert describes the mid-holocene climatic optimum as a time in which forests extended farther north in Europe and rivers flowed in the Sahara (Principles of Planetary Climate, Chapter 1). The wet Sahara was probably a climate response to Earth's orbital precession, Earth's wobbling top-like motion that determines how the sun's energy is distributed globally.
Regarding the wet Sahara, Dyson said:

The statements in this passage struck me as odd. I've perused many Holocene climate reconstructions and I didn't recall any prominent global spikes in temperature from this period, but my knowledge is incomplete. As a check on my memory, I consulted some graphs of ice core data plotted for Greenland and Antarctica and confirmed that nothing exceptional affected Greenland and Antarctica: 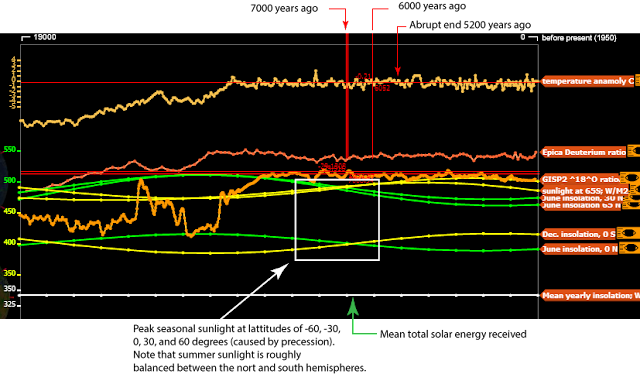 I've been looking at climate modelling studies with a renewed vigor since reading Dyson's statement that projections of global warming are based on flawed climate models. It's not only Dyson's comment that provokes me. The climate models fallacy is promoted by many private interest groups trying to influence the COP21 climate talks in November. For example, the Cornwall Alliance is a group of faith-based, pro-fossil fuel, evangelicals:


Many fear that carbon dioxide emissions from fossil fuel use endanger humanity and the environment because they lead to historically unprecedented, dangerous global warming....
Computer climate models of the warming effect of enhanced atmospheric carbon dioxide are the basis for that fear. -- An Open Letter on Climate Change to the People, their Local Representatives, the State Legislatures and Governors, the Congress, and the President of the United States of America. Cornwall Alliance, 2015.

This letter also cites a lot of inaccurate and outdated information on the instrumental record, and credits the Judeo-Christian Heritage with the rise of the modern scientific method and dismisses computer modelling as not a reliable avenue of research.

So, I want to share what fictions climate models help us to maintain, and I didn't have to dig deep for good example, rather, just open my mailbox. My most recent issue of Nature (15 Oct. 2015) reports on modelling the loss of continental ice from Antarctica:

I've been asked to comment on an essay by Freeman Dyson written in 2007 in which Dyson proposed some heresies about climate science. It seems unfair to criticize an essay from 8 years ago, but some of what he said was demonstrably wrong in 2007 and a recent interview from 2015 suggests his opinion hasn't evolved since then. A physicist with his reputation has the potential to influence a lot of people, so it's worthwhile to examine if his sphere of influence should extend to the realm of climate science. The recent interview with Dyson coincides with a release of a report by the special interest group The Global Warming Policy Foundation in which Freeman Dyson wrote the introduction. The latter two items appear to be in preparation for the upcoming climate talks in Paris, possibly with the goal of influencing public opinion.

Summary
This is part 1 of two or more posts in which I'm commenting on the following:
Part 1
Part 2