In the hypothetical two-dimensional world of Flatland, exterior lighting is a simple task. First, you identify the perimeter of your building. Then, you attach lights on the sides pointing outward. 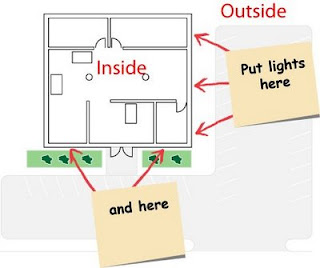 This is about as much thought giving to the lighting of this building withing Lake Elsinore, about 35 miles from Palomar Observatory (which is visible from this location). 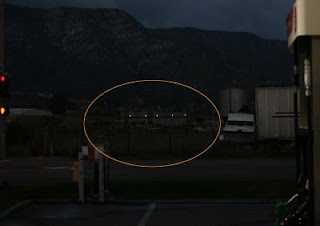 The exterior lighting is bright and points outward. Very little is shining on the property. The result is that motorists have to contend with the hazard of glare and are unlikely to observe any vandalism taking place.
It probably has the worst ration of glare, light pollution, and energy waste to beneficial light of any building in our community.
Posted by jg at 12:32 PM No comments: 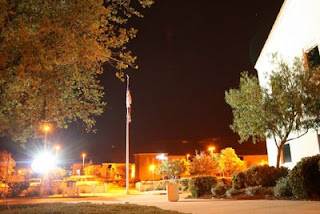 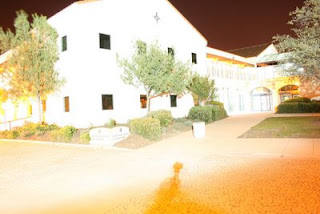 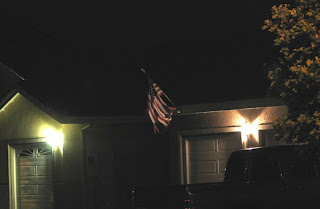 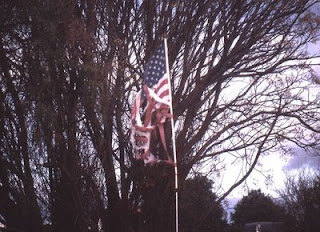 
I suggest that any business conducting a flag ceremony between 7-8 am and 4-5 pm, will get more attention than if they brightly lit a flag all night.
Posted by jg at 4:01 PM 1 comment: 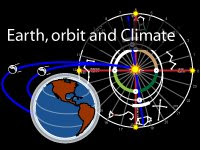 I’ve always admired botonists for keeping their own scientific definition of “fruit” while the common world speaks of fruits vs vegatables. Commonly, fruit is a culinary distinction, applied to an estimate of sugar content and flavor in produce. Thus, tomatoes are vegatables. To a botonist, however, fruit is the fleshy tissue enveloping the seed, thus, tomotoes, avacadoes, and zuchinni are fruits. For me, learning this distinction was like being admitted into a secret order.

Astronomers should have done the same when revisiting the classification of Pluto. Astronomers are smart enough to keep their own definition of planet and minor planet while letting “planet” be applied to Pluto, Eris, and Ceres. Planets should be for the people, to make them happy so they fund observatories and turn their lights down.

I recently learned that climatology has it’s own “precession”. Astronomers know precession as Earth’s wobble, the changes in direction of north over a cycle of 25,800 years. Right now north points to Polaris, but this is constantly changing.

A foundation of climatology is the influence of changes in Earth’s orbit (it’s precession, tilt, and eccentricity) and how these correlate with glacial cycles going back millions of years.

I started illustrating these orbital changes and quickly discovered that the precession values I read in climatology research do not clearly correlate with precession of the Earth’s poles. So, I asked the writer of the science blog Open Mind how precession was measured. His answer:

The quantity called "precession" in climate is the product of the eccentricity and the sine of the angle between the longitude of perihelion and the longitude of the equinox; it's an indicator of the magnitude of the impact on high-latitude climate forcing due to precession of the equinoxes (in the astronomical sense).
To this, I was thinking 1) which equinox, fall or spring? Or does it matter? and 2) how do I calculate the sine? I didn’t ask these questions; this scientist kindly took the time to give a novice a good answer and deserved better than “Huh?” So, I decided to teach myself the skills needed to make sense of the answer. Thus, I created my Orbital Viewer.

If you look at the obital viewer, please read all the caveats, essentially that it illustrates the concepts showing orbital changes as simple clockwork. It does not recreate the orbits accurately and especially cannot to be used to discredit the science of climatology. Any errors are mine, and do not threaten the scientific concensus on global warming. It’s an illustration, but one that moves.

It’s very exciting to see a parallel in climatology. The internet is making it possible for us to read the work of real scientists, and to ask them questions. In my amateur study of climatology I’ve become addicted to the blogs RealClimate, Open Mind, Rabbett Run, Brave New Climate and the list is growing as I learn more and want more answers. (It should be noted that so far I’m still climbing up the learning curve. The more I learn about climatology, the more I know what I don’t know.)

Unfortunately, there has been a deliberate effort to discredit climatology for its prognosis on global warming (an therefore its indictment of fossil fuels, our energy use, and thus the foundations of our economy an and high standard of living). This effort is assisted by 1) climatology having many uncertainties that honest scientists speak openly of, 2) the media loving extremes (e.g., we’re going to die vs it’s a leftist hoax) as extremes sell more papers, books, and advertising, 3) and the general public not only lacking a deep scientific understanding but not knowing where to look for one, and 4) a large number of people who simply will not read any science.

A good scientist rarely makes a good propogandist, a weakness that has fallen prey to the misrepresentation of climate science by propoganda machines and by “anti-amateurs” who use skepticism and sophistry to make a name for themselves. The propogandists need only get attention, funding, or sell their books to be rewarded in their efforts. As some of the effort has been to delay regulation of greenhouse gases, more scientists are discussing their work through blogs. They offer an opportunity for any of us to become amateur climatologists. The blog realclimate.org started this way.

And so I begin the first in a series of illustrations on climatology. The goal is to share an understanding of the science and to invite people to become amateur climatologists. It is also clear to me that much (not all) of the accidental misunderstanding of global warming comes from the fact that people don’t read science. So I hope the illustrations help to this end. And last it is fun. I’m not perfect. I’ll make mistakes and will document corrections. Readers are welcome to ask questions. If I get some good ones I can’t answer, then it’ll be fun to ask some real climatologists.
Posted by jg at 12:55 PM No comments: