Ok, I Did Do the Nose

In my title I'm alluding to Monty Python and the Holy Grail, the scene where members of the witch hunting crowd admit to adding the nose and hat to their suspected witch. The significance of this will come later.

Some time ago I shared a possible archeoastronomy artifact from my region refered to as cupula rock. A photo is below: 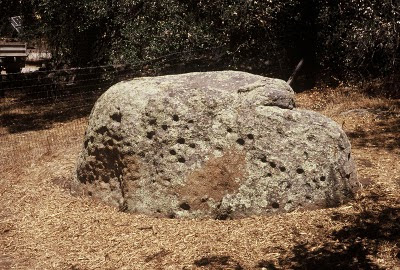 I've hypothesized that this rock contains constellation images that the Native Americans, likely Luisano, thought worthy of representing. My only support for this notion other than the apparent similarity of some patterns to constellations is a mention of this behavior in Ray Williamson's Living the Sky and a fleeting conversation with a local Luisano who said "yes, our ancestors did that [carved constellations]". Verification or refutation has been on my to-do list.

Recently I had the opportunity to see Professor Anthony Aveni of Colgate University and author of many books on archaeology speak on the Maya calendar and the significance of 2012. Professor Aveni is motivated by the anxiety among young people he's met that 2012 bodes ill. His work assures us that there is no reason to believe the Maya made any prediction about 2012 other than it being the time when, like an odometer, their calendar turns over. Since the lecture, I've read his book 2012: The End of Time. A main thrust of this book is that it appears to be an American (U.S., not Native) tradition to project our views onto ancient cultures, and he cites a list of cults and doomsayers from throughout American history.

I sent the photographs displayed here to Professor Aveni. Speaking as someone who has examined countless artifacts and sites, he offers the opinion that there is no compelling reason to see constellations in this rock. He recommended another of his books, Uncommon Sense, in which he argues that maps are a product of western culture. My conjecture on this rock is not too different from projecting my own map of the sky, or of elements of the sky, onto a past culture. Fair criticism. He adds that this is only his opinion, but I went out of my way to get it, so I'm eager to share it here in connection with (or correction to) the previous post I made on this topic.

I would add one update from my previous post. I had thought one star in my proposed Cassiopeia was a natural indentation. I've recently returned to the rock and this indentation looks less natural than I had first thought.

And now my joke: Am I projecting my concept of the stars onto this rock? Here are the photos I sent him and so I have to admit: well, yes, I did draw Cassiopeia: 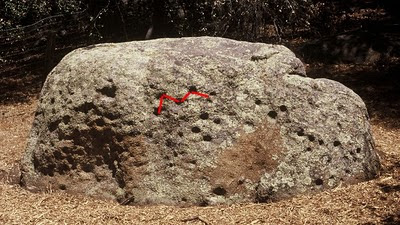 Cassiopeia traced from a photo and overlaid on the image 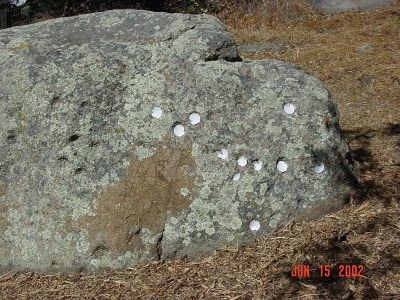 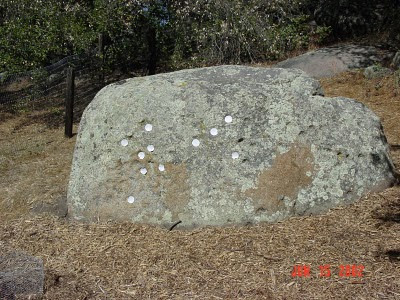 Hypothetical Hercules (butterfly shape on the left):
Yep. My hand was in this one too
(Update, 6 April 2010: I just learned that within the past week, someone of Native American descent, asked at the Reserve to see "the star rock" saying that her grandmother had told her about it. Two possibilities come to mind: one, my sharing of this rock evoked someone's curiousity or influenced a memory; or two, there is some cultural history of this custom or specific rock outside of my influence. Humility suggests the latter, but either are possible.)
jg
Posted by jg at 12:31 PM No comments:

I've been teased by friends telling me that among amateur astronomers, I'm a "star gazer" rather than an astronomer. The distinction is this: if you're at a star gazing/astronomy event and you go to bed by 10:00 pm, you're a star gazer. I think the biggest change to star gazing in centuries is the discovery of planets around other stars, such planets are also called exoplanets. Before these discoveries, we star gazers wondered if there were other planets around the stars we see. Now, we know.

With the discovery of 400 exoplanets, and 70 of these having transiting orbits (where the planet passes in front of the star from our point of view), I'm finding the excitement of new discoveries in this field comparable to the first time I looked at 51 Pegasi and said, "there's a planet around that star."

Every year I try to create a presentation for my astronomy club. So this is my soup starter for a short presentation. I don't know where it will lead me.
(Click the diagram to enlarge it.) 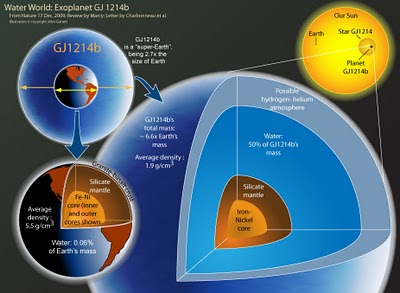 All of the information in the above illustration comes from excellent review in Nature 17 Dec. 2009 by Geoffrey Marcy, a lead discoverer of exoplanet. Marcy's review included a diagram of the exoplanet, which I've borrowed form, but added comparisons of this other solar system to our Earth and Sun.
Posted by jg at 4:59 PM No comments:

My thanks go out to current mayor of Wildomar, Bridgette Moore, for notifying me that a nearby motocross facility is modifying its operations. Their new hours will require lighting up to 10 pm. The initial study calls for no mitigation on lighting and also describes what may be the potentially worst type of light (in terms of glare, visual clutter, and light pollution) for any outdoor application: 30 portable, diesel-generator powered lighting units, with each unit consisting of four 1,000 watt fixtures and emitting 440,000 lumens (See http://www.maesco.com/products/hp_tower/hp_tower.html for a sample of this type of light).

Such lighting also violates Lake Elsinore's commendable municipal code on lighting:
17.112.040 Lighting.
All outdoor lighting fixtures in excess of 60 watts shall be oriented and shielded to prevent direct illumination above the horizontal plane passing through the luminaire and prevent any glare or direct illumination on adjacent properties or streets. Due to the City’s proximity to the Mount Palomar Observatory, the use of low pressure sodium lighting shall be encouraged. [Ord. 853 § 1, 1989; Ord. 772 § 17.38.040, 1986. Code 1987 § 17.38.040]. (See http://www.codepublishing.com/CA/lakeelsinore/.)

I like having a motocross track. I can hear it from my home, and though I'd prefer not to hear it in the evening, I'm ok with the extended hours if it meets a demand from our community. I do however, vehemently object to the choice of light fixture and that lighting mitigation was not considered in the initial study.
Not only is the fixture the most egregious light polluter available, due to glare, it is a poor choice in any application where motorists and pedestrians mix. Motocross patrons, the nearby communities and economic development areas, and the astronomical research community need a better solution.

I'm grateful to The City of Lake Elsinore for the opportunity to comment. Below the comments I submitted:

Summary
I believe the Initial Study for a Mitigated Negative Declaration for the Lake Elsinore Motocross Facility Change in Operations (herein referred to The Declaration) is deficient in not addressing the following potential impacts of artificial lighting:

It is imperative that these effects be considered because the choice of lighting described within The Declaration has the greatest potential to maximize the above problems:

…the proposed project would result in the use of portable, diesel-generator powered lighting. Lighting features proposed would consist of up to 30 lighting units, with each unit consisting of four 1,000 watt fixtures. The portable lighting fixtures will be mounted on standards measuring up to 30 feet in height. As needed, lighting would be provided between the hours of 5:00 p.m. and 10:00 p.m. during November through March; 6:00 p.m. and 10:00 p.m. during the months of April through May, and October; and 7:00 p.m. and 10:00 p.m. during June through September. With the addition of nighttime lighting, the number of hours in which the facility could operate would increase. Depending on the time of year, the amount of hours added to daily operations will vary from several hours in the winter months, to no more than two hours during the summer. (From pages 7-8 from The Declaration; bold text is my emphasis)

From the description in The Declaration it is possible the lighting described is the same type of lighting typically used at construction sites for temporary lighting. These lights lack proper shielding and their nearly horizontal aim guarantees that the motocross lighting will be a community eyesore and hazard where visibility is concerned. The photograph below shows a hillside being lit by one portable light, similar to those described in The Declaration. Note that the background is an 800-foot slope being lit by light spilled beyond the lighting target. You can even see shadows of trees near the light projected onto the hillside 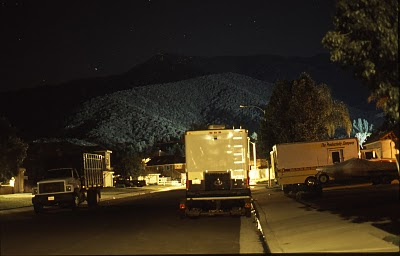 Why Lighting Impacts should be considered the The Declaration:

Mitigation Issues to Consider
All of the potential lighting impacts can be resolved with a "Less Than Significant With Mitigation Incorporation" rating if the following measures are taken: 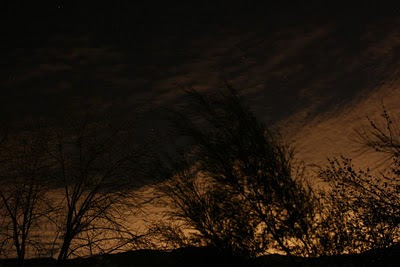 Figure 1: Upward light from The City of Lake Elsinore is accentuated by clouds in this photograph. This photo was taken near Grand and Corydon with the camera pointing northward. 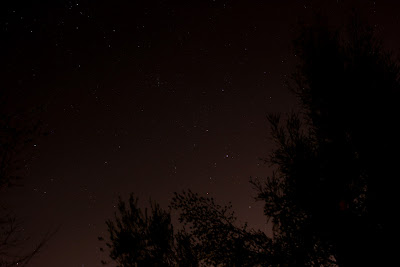 Figure 2: View from Wildomar near Grand and Corydon looking North on a cloudless night. The glow behind the tree is from the City of Lake Elsinore. 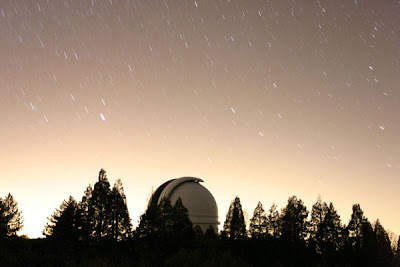 Figure 3: Northward view of Palomar Observatory's 200-inch telescope dome. Five-minute exposure at 1600 ISO. The light is coming from all the cities north of Palomar, which includes The City of Lake Elsinore. 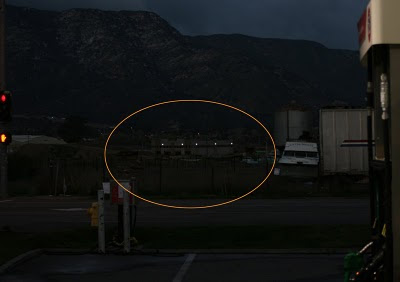 Figure 4: Light clutter and glare. Photo taken at Mission Trails and Bundy Canyon of a building on the north side of Corydon, about ½ mile away. The lights create clutter and close up they create glare for motorists. These lights are on a property within The City of Lake Elsinore shine most of their light onto Wildomar. 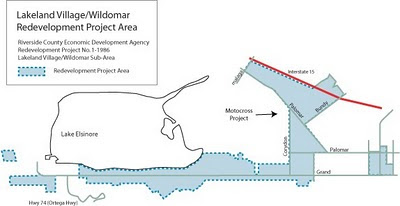 Figure 6: Excellent Class II lighting at a business park on Corydon Street (within The City of Lake Elsinore). Note: The lights of these buildings were used a good example in the lighting guidelines of the Lakeland Village/Wildomar Redevelopment Project Area. 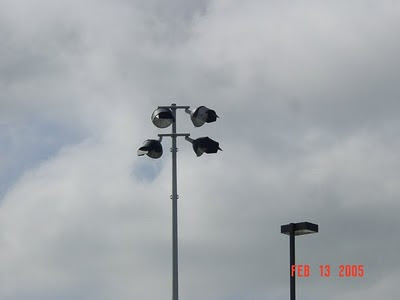 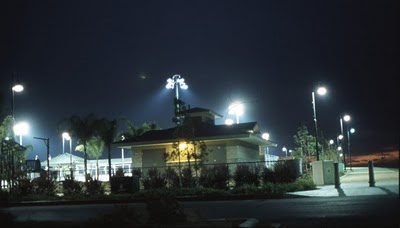 Figure 8: Stadium lights in use. Note that the beams show clear downward angle due to the visor. 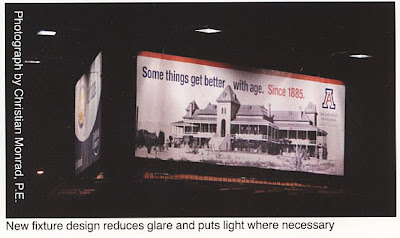 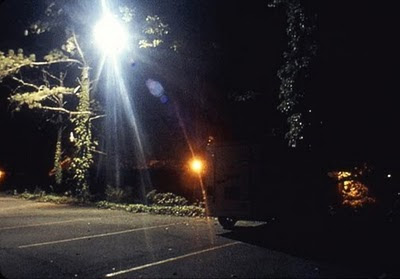 Figure 10: Glare from the unshielded light prevents a pedestrian from seeing what is in the shadow. Photo was taken without a flash to simulate the human observation. (Photo from International Darksky Association) 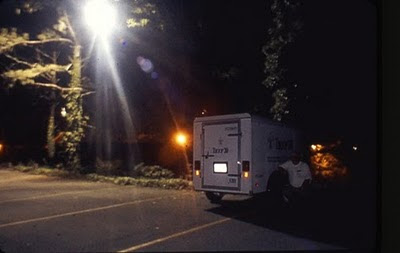 Figure 11: A flash was used to show what the human motorist or pedestrian fails to see when glare is present. The person behind the truck is also in Figure 10. (Photo from International Darksky Association)
Posted by jg at 12:37 PM 2 comments: