Not a real planet

I've been tracking some sunspots this week, figuring that this is my best opportunity to capture a week or more of the sun's rotation in images. Last night, Christmas evening, I abandoned my scope to join family festivities, and when I returned the sun had moved behind stratified clouds. Normally, that means the end of a photo session, but in this case, I thought my cloud-draped sun images would make nice gas giant planets to use in my solar system presentation on Jan. 6. Though I'm depicting Jupiter, Saturn, Uranus and Neptune, my depictions will be of these worlds 4 billion years ago, so it's reasonable to portray them as gas giants, but different from how they appear today. Saturn, for example, would not necessarily have rings. Some color and texture differences would also be in order as the outer planets would be much closer to the sun and therefore receiving more energy to invigorate their climate systems.

So here is my sun through clouds, modified to look like an ice giant planet with two transiting moons. The shadows are the sunspots I've been tracking. 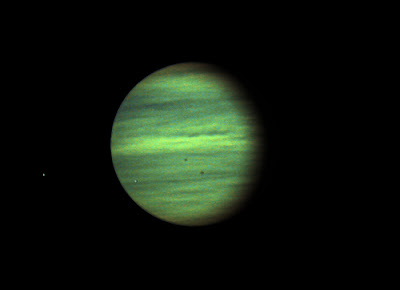 The next general meeting of the Temecula Valley Astronomers is Monday, January 6. The new location of our meetings is now at the Temecula Public Library at 30600 Pauba Road. Our meetings are now starting at 7:00 pm.

I will present my show on the Nice model of the solar system, entitled 4.6 Billion and Counting. 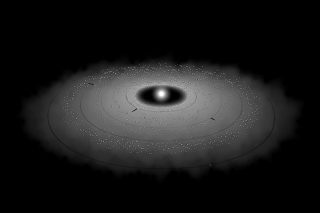 We will also have a presentation by TVA Vice President, Tim Deardoff, on what's up in the sky for January. Tim has been doing an excellent job of maintaining the Facebook page of the Temecula Valley Astronomers. You need not be a member to "like" us on Facebook; however, becoming a member does support our outreach.

I would also like to extend a thanks to the Rancho Water District for providing a low-cost meeting room for the past 20 or more years since the founding of the Temecula Valley Astronomers. I recently counted 43 unique schools or youth organizations that we've provided star parties for in the past 5 years (which is how far back my maps to events go). Considering my collection of maps as a fraction of the total locations we've attended, and that many of our locations are repeat events, the Rancho Water District's low cost meeting room has helped subsidize the experiences we've provided for schools and youth groups for 20 years.

The following night, 7 January 2014, we're having a public star party at the Murrieta Public Library. A map is provided below. The event is free and open to the general public. Typically, it draws a lot of families with young children, so the indoor show at 6:00 pm is oriented to a young and general audience. Observing will follow the 1/2 hour show till about 8:00pm. 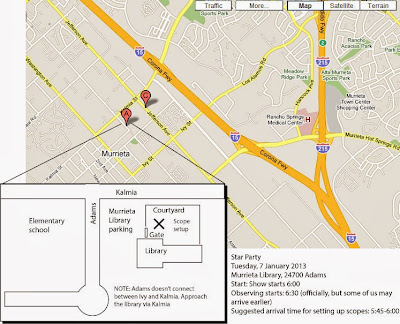 The magazine Europhysics News has published an article by Skeptical Science founder John Cook on the anti-science campaign against climate science. I created an illustration the cover page, which I've shown here: 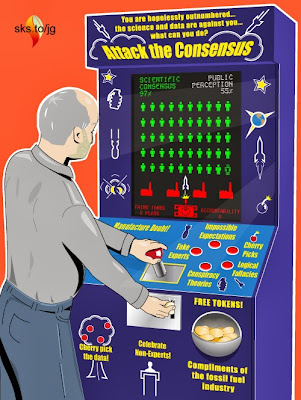 The article is open access:
Combating a two-decade campaign attacking the Scientific Consensus on Climate Change

A shooting star off the shoulder of Orion and double meteors

I watched the Geminid meteor shower from Borrego Springs the morning of Dec 14th 2013. The moon had set by 4:00 am, which allowed for a dark hour or two before sunrise. I saw a few fireballs and captured six or seven faint meteors with my camera. I'm sharing the brightest of these faint meteors below: 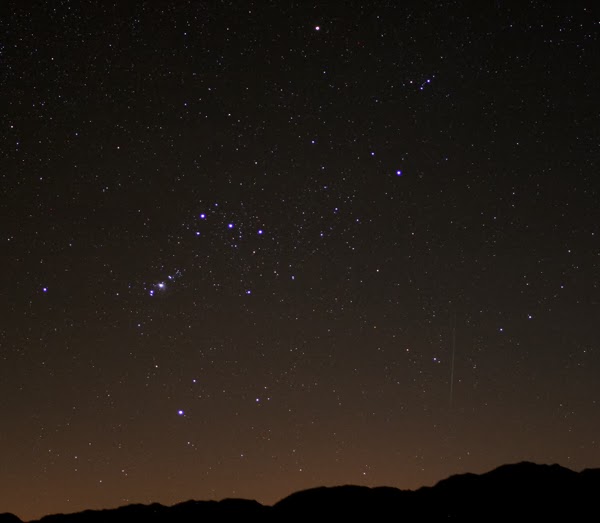 Most of my 35 photos between 4 and 5 am were 1 minute long, the exception being that when I saw a meteor in or near my field, I'd stop my exposure so the background doesn't get any brighter. My photos represent about a 1/2 hour of cumulative exposure. Catching six or seven out of 35 minutes suggests a rate near 10 per hour. If my camera's field of view were 1/10th of the sky -- I'm confident its field is smaller -- that would suggest that the predicted rate of 100 per hour under a moonless sky was accurate. Caution should be taken with this estimate as it's based on my small sample group.

Why do I keep saying "six or seven"? Because one photo has three streaks but two are so closely in line that they may be one meteor: 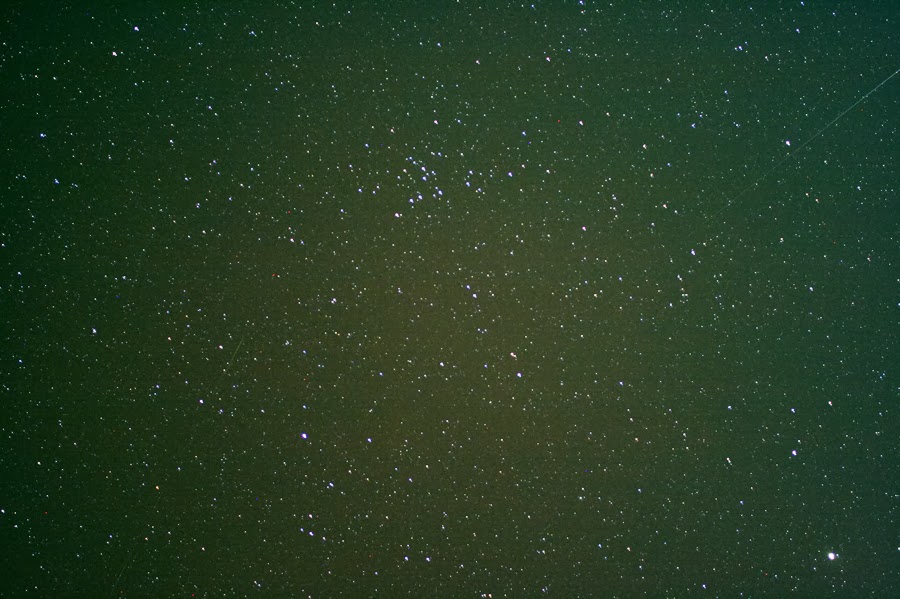 Three faint streaks can be seen in this photo of Coma Berenices. 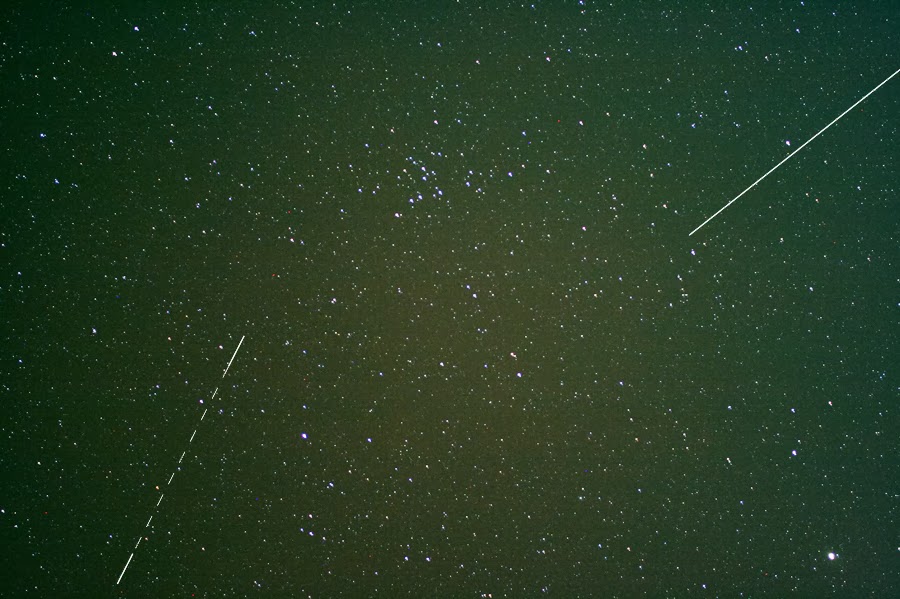 Tracing the streaks reveals that two are on the same radiant. 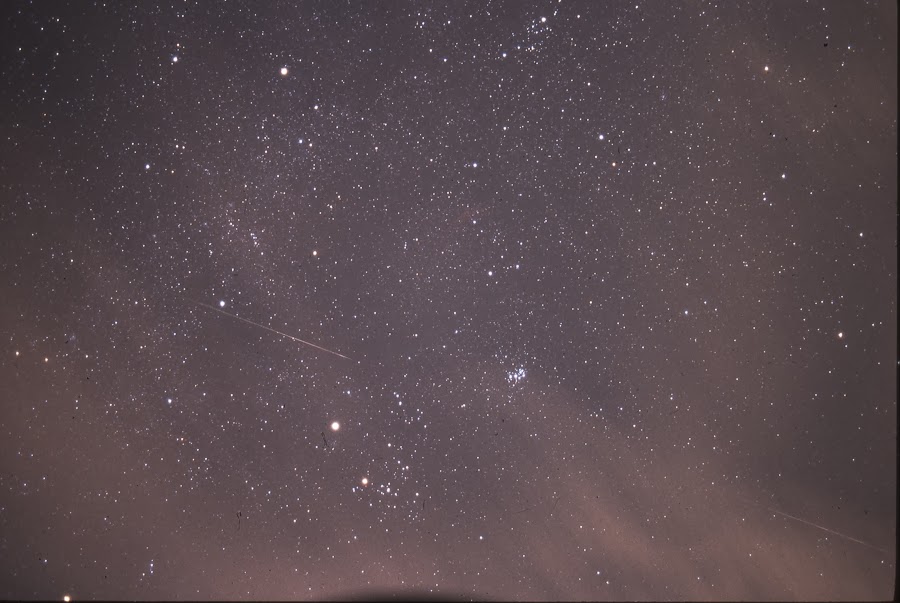 Two or one meteor passing near the Pleiades in Taurus. 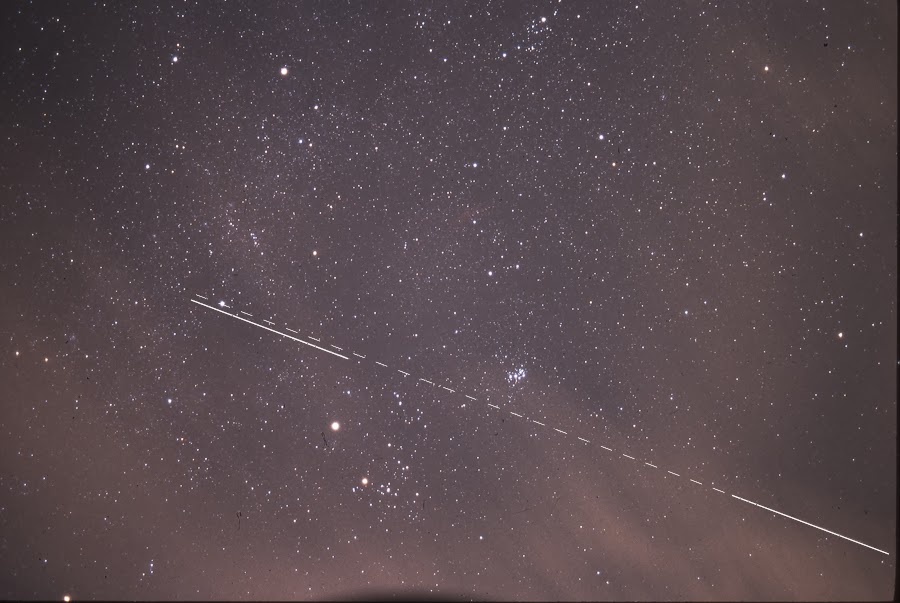 Tracing reveals parallel paths that could be on the same radiant.
Curvature of the slide film can be seen at the bottom center of the frame.

I never believed that I had captured a meteor appearing, then dimming, then reappearing, but I think I have now.