The Antikythera Mechanism is a hunk of metal fragments found in the Mediterranean Sea over 100 years ago. Numerous scholars have demonstrated that it is the corroded remains of a calculator of celestial motions, built around 2000 years ago.

I've dabbled with a few illustrations of the object and its origin in my show The Astro Time Machine. Since creating this show, I've worked a little on my animation of how this device was thought to portray the motion of the moon's elliptical orbit. 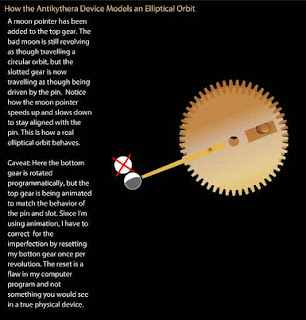 My model is simplified. I'm showing only the pinned and slotted gears, which is enough to show how this arrangement produces elliptical motion.  The actual device would have had a minimum of four gears for the same motion, similar to this exploded diagram: 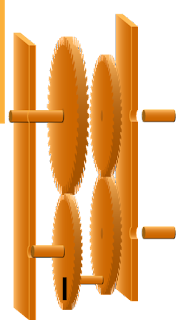 And using four gears would have allowed the modeling of additional motions, such as the change in axis of the moon's orbit.

I don't claim to accurately show the arrangement of gears used in the Antikythera device. My animation is meant only to show how two wheels with a pin and slot produce the motion of an elliptical orbit. My animated model could easily be replicated with real wheels for a classroom project. Gears could be replaced with wheels connected by belts of elastic cord. With the correct tools, I think it would be easier to build a real elliptical motion mechanism than to program a model, at least for me.