On December 29 I observed comet Lovejoy using binoculars and a small telescope. It was very easy to see in a 9x50 finder scope, even with a bright moon. Here is a wide field view of the comet in relation to Orion. Lovejoy is in the crosshairs. Over the next week it will move approximately in the direction shown by the arrow. 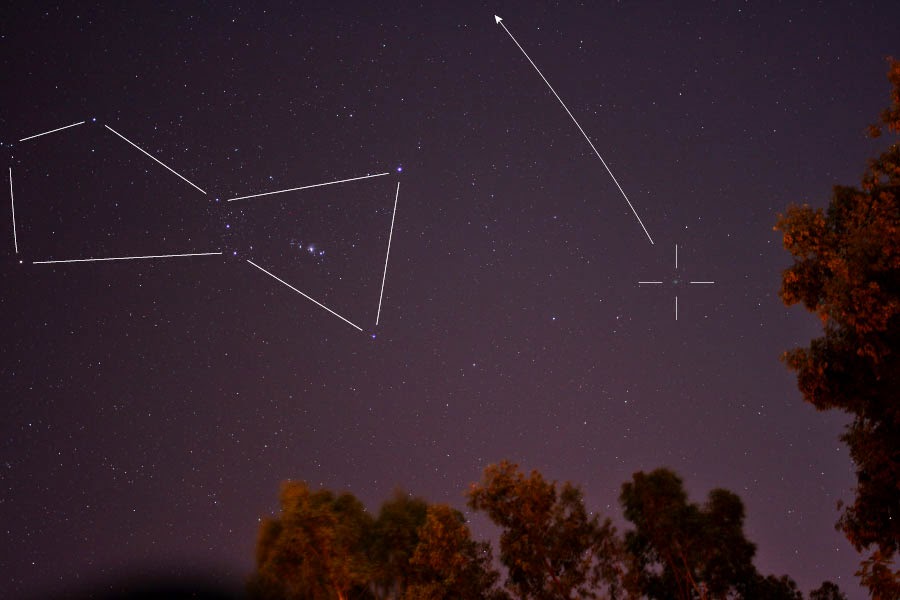 Here is comet Lovejoy in a small telescope: 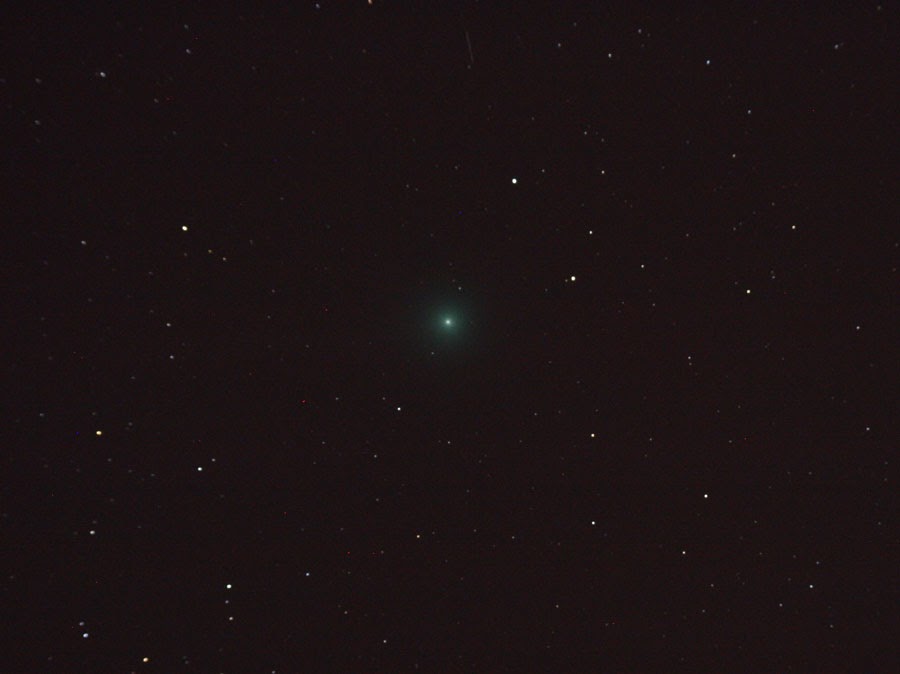 The next best time to watch for this comet will be in the early evenings after January 7th, because the moon will be out of the way.

December 24 had some interesting clouds that produced great iridescence. My hand is blocking the sun in the picture below. 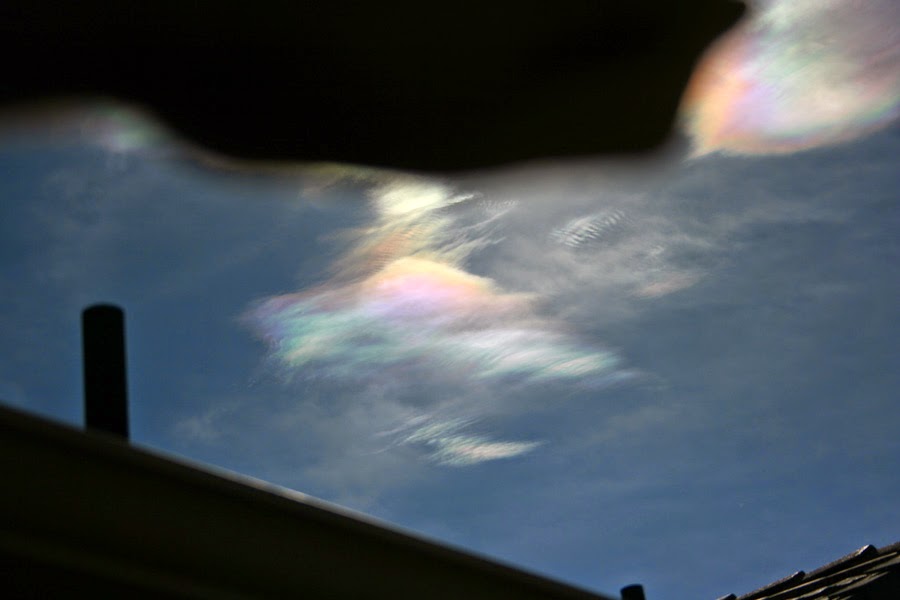 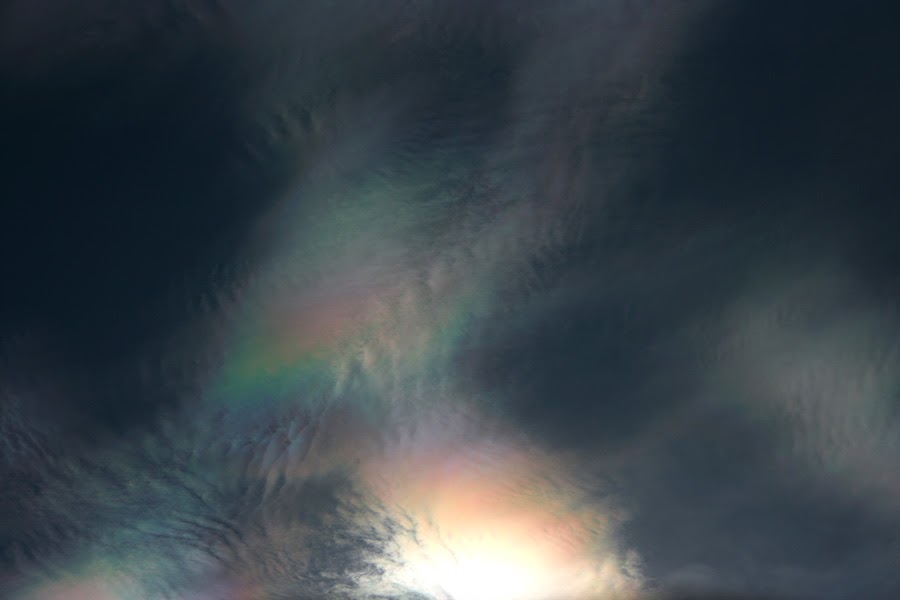 The color in these photos matches that perceptible to the eye, though the sky is darker in my photos due to my camera's adapting to the brightness. Our eye can detect the colors of the sky and iridescence, but the camera, at least mine, has to choose one. If I had taken identical photos using different exposure times, I could combine the the images in Photoshop to reproduce the full range of color; but the iridescence was fleeting, leaving no time for tripod mounting or controlled exposures. My best results came from using the camera's automatic landscape settings.

Minutes after the above photos, a jet passed through the cloud, leaving a contrail up to the cloud but erasing the where it flew through. The erased parts are probably the hole-punch effect, where a plane or strong updraft punches holes in a cloud. This tells me that the cloud was very thin, perhaps a requirement for producing the iridescence. As the clouds thickened in the afternoon, the iridescence was gone. 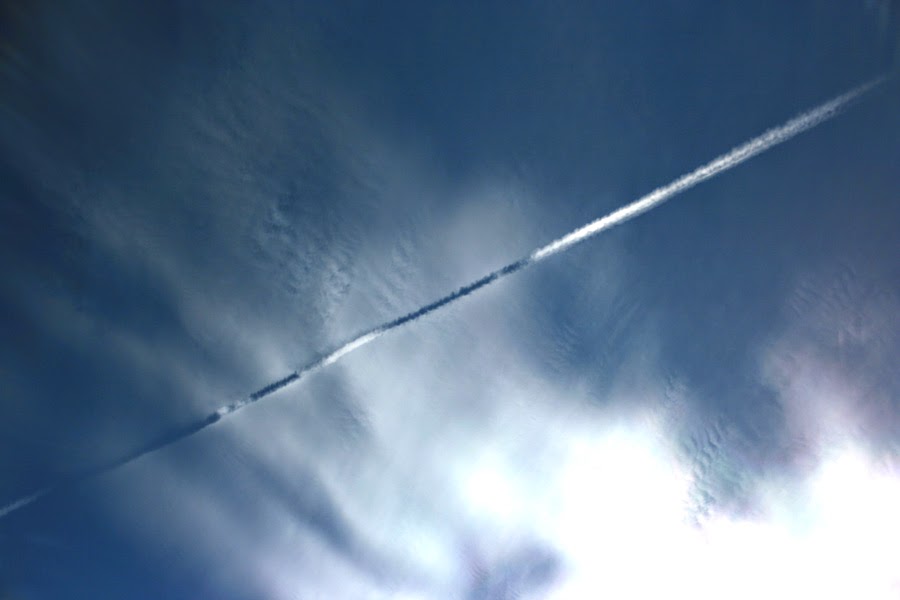 While looking for comet Finlay, which can be found next to Mars throughout this week, I bagged a meteor. Last night was the Ursid meteor shower, a light sprinkling offering 5-10 meteors per hour -- not the type of thing I stay out for on a cold night, but it was a clear night and good for star gazing. 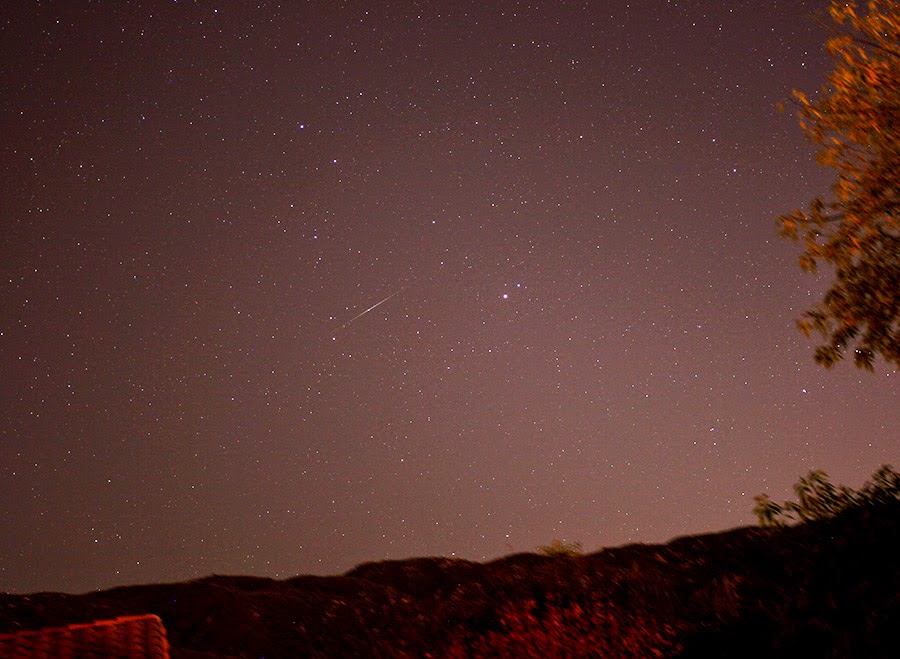 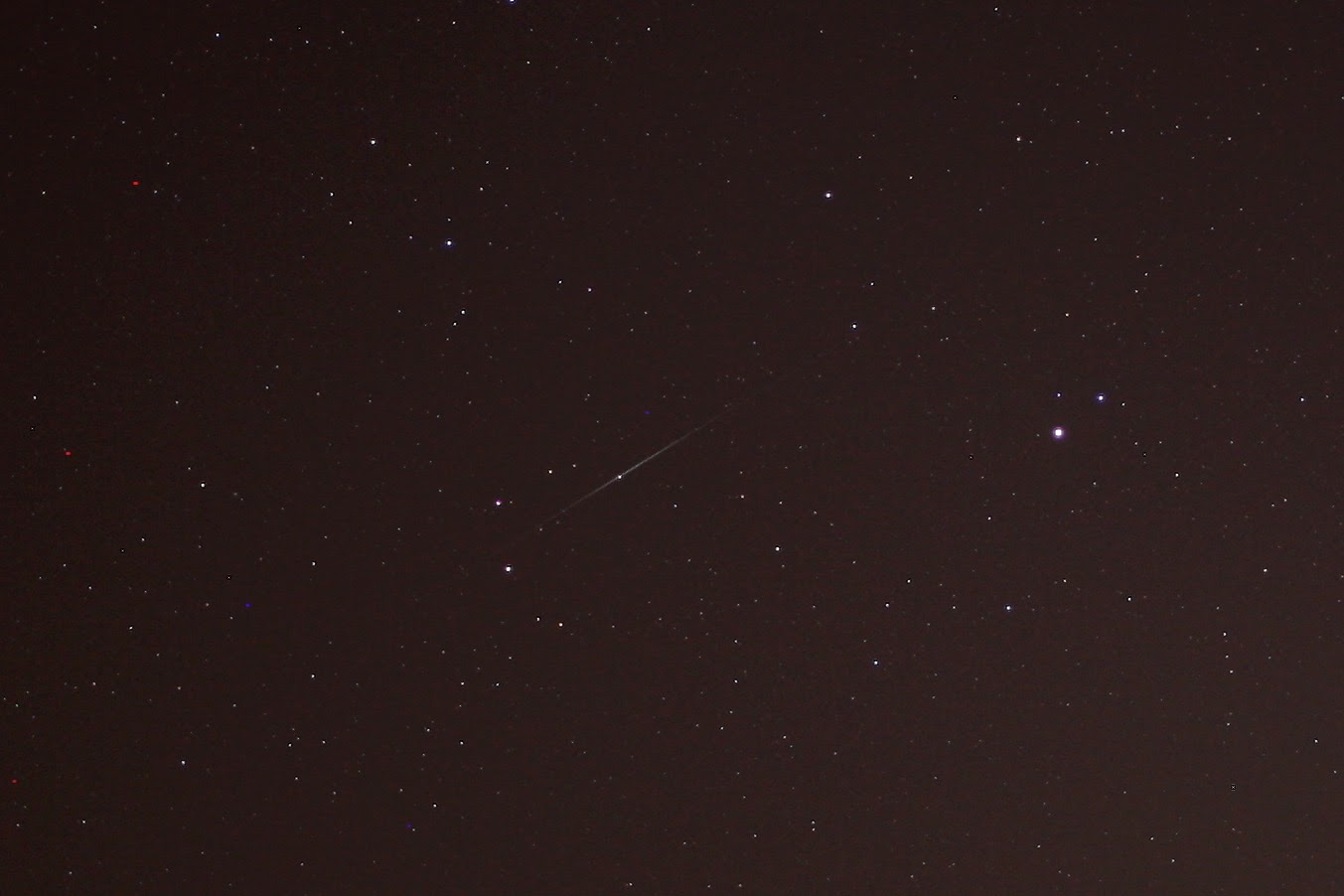 Any meteor that crosses a star is suspect; that is, it could be a plane that blinks or a satellite that rotated its more reflective side toward Earth, but the star it passed through is listed in star charts as 33 Capricornus.

And of course, before after shots include the star:

I did find Comet Finlay, a feat that attests to my community's fairly dark sky. The following photo shows the faint green comet amid 9+ magnitude stars. 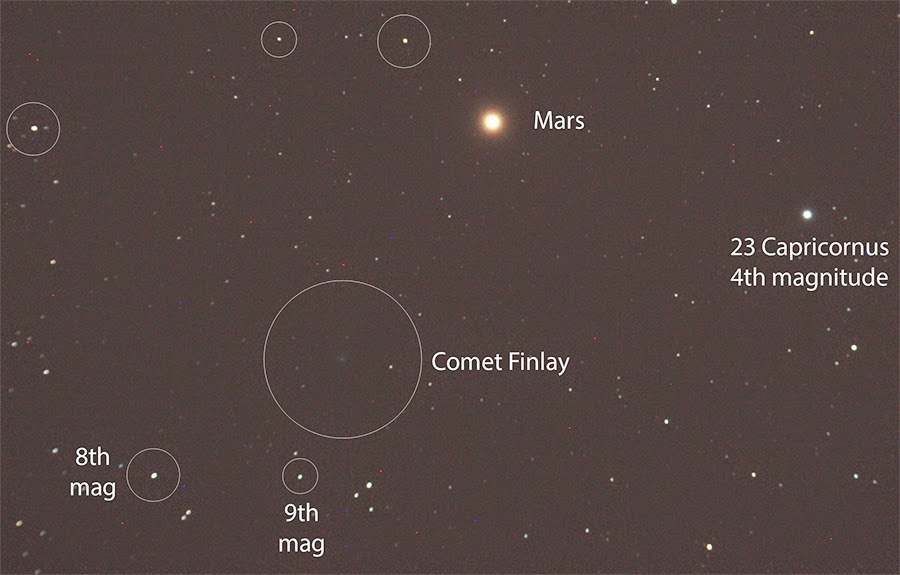 
Monday was another parhelia day. I saw a sundog in the morning and pulled over to take a quick picture. Upon examining the photos, I learned that my camera's landscape setting had overexposed and lost the color. A lesson I applied later in the day.

When driving home that evening, I saw a sun pillar. Based on the morning's experiment, I knew I had to not just pullover, but pull off the road where I could take my time with manual exposure settings to get the sun pillar: 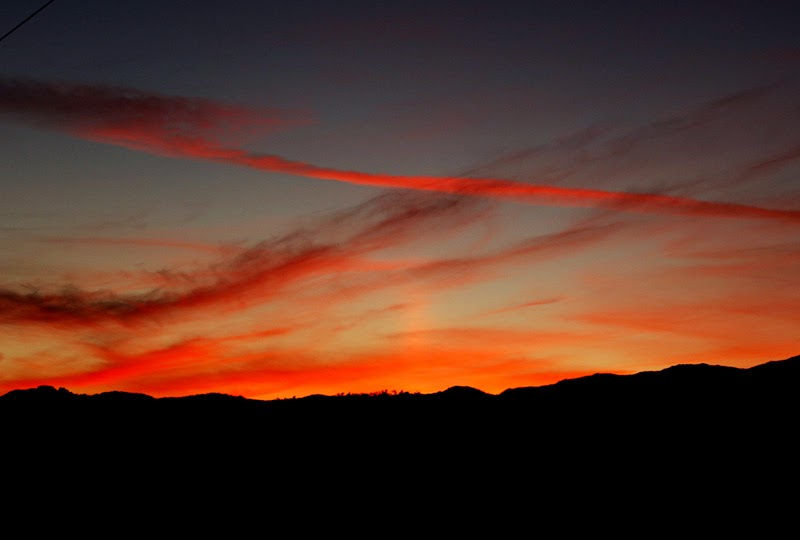 The sun pillar is the column of light in the center, caused by the downward refraction of sunlight by ice crystals in the atmosphere. Light from the sun that would normally pass over my head is being bent downward so I see it as a column. I suspect the geometry refraction through ice crystals limits how high the pillar can be.

The phenomenon lasted for about 5 minutes, making timing critical.