In hindsight, I wish I had captured many of the climate-related discussions I've engaged in. Some, like a column by an editor of a industrial automation trade journal went missing; others lose their revealing comments; and others I just lose the link.

Here, I've captured the online comments made when my local paper ran this article on the efforts of a lobby to promote an energy tax in California:

The comments below reveal common attitudes in the resistance to addressing climate change. I'm posting them for the purpose of keeping them. Later, I may try to condense and summarize them. The comments are listed from the most recent to the earliest, a formatting choice of the newspaper, which I think is intended to promote comments by hiding when certain ideas have already been stated. In other words, later commenters are less likely to see what has already been said, so they are more likely to repeat but in their own words.

As part of my What's Up presentations to my astronomy club, here is my summary of the February sky. I'm a little late, but this presentation is good for another month, and will be good next year in February, too.

My presentation is in Flash and can be viewed at this link:
http://www.brightstarstemeculavalley.org/whatsup/WhatsUp.html 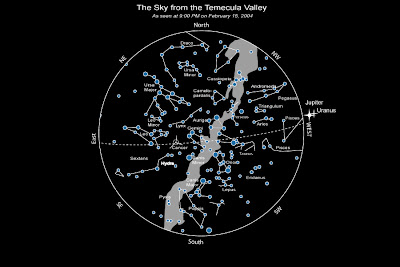