This summer I had the opportunity to visit Sedona, Arizona and hike through what I'd describe as a more intimate version of the Grand Canyon. The geology of Sedona is striking and it's the reason this location should be any tourist's destination (though some may be drawn to the city's shopping, art galleries, restaurants, bars, and new age scenes). The high point (literally) of my adventure was hiking the Sterling Pass trail to the Vultee arch. 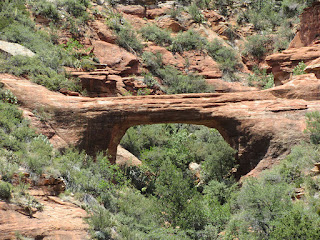 It took me three tries to reach the arch, and I probably wouldn't have tried a third time if I hadn't received optimistic information from a volunteer at a nearby ranger station.

In my first attempt, I followed the wrong trail. The Sterling Pass trail is located across from the National Forest Service's Manzanita campground. There is a rogue trail next to the Manzanita sign and you can take it about 200 yards up steep terrain before the trail disappears, leaving the hiker on exposed sandstone rocks. Fortunately, I photographed notable landmarks, like dead trees, as soon as I suspected I was on the wrong trail. One may wonder how I could lose a trail and wander off, but the route I followed looked traveled and was interrupted by bare patches of rock. After you high-step through a few rock formations, then onto another bare patch of trail, and then through a few more high steps, looking back you'll see a maze of similar steep and hazardous return routes. 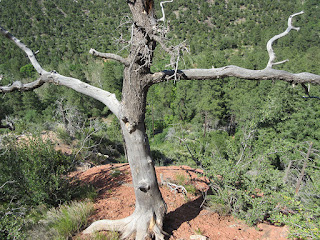 One distinctive landmark I photographed
so I could view it on my camera to find my way back.
Notice the trodden soil easily assumed to be a trail. 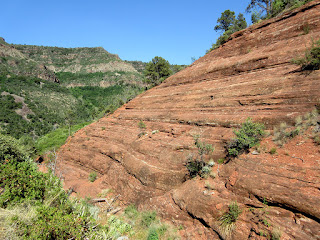 It's very easy to think a trail leads over one of these formations,
then looking back and seeing that all possible return routes look  the same.

It was not my goal to trail blaze and by the time I confirmed I was off the trail, some wandering and skillful down climbing found my route back. 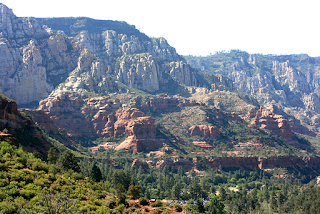 Noticeable red and gray rock layers as observed
from the rogue trail above Manzanita Campground.
I  was on the wrong trail but it offered a good view
of the canyon's geology as well as the popular Slide Rock Park.

After returning to my parked car, I walked about 30 yards up the road from the Manzanita sign, where I found the proper trail behind a little fold in the hillside. The trail was marked by an easily missed rust-colored sign about 30 feet from the road. 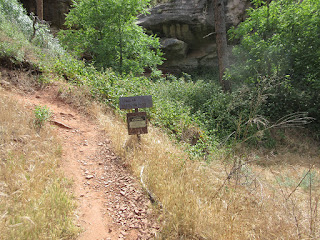 Look for this sign to start your hike. Accept no substitutes.

The trail gets a lot of traffic and is in very good condition, so within 50 minutes I was at the Sterling pass. I turned back because evening was approaching.

The following day I talked to a ranger station volunteer who said the arch was just "a little ways past the pass". I returned with a hiking companion. It was midday and the temperature was nearly 100 degrees F. Soon my fellow hiker had to turn back. I returned later that afternoon for my final attempt. I reached the pass easily, having become quite familiar with the route. 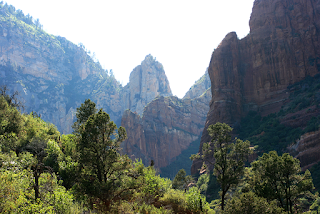 A view of the Sterling Pass from the lower part of the trail.
The pass is probably behind the red rock formation in the center of my photo.
It looks like a daunting climb, but it went quickly, about 40-50 minutes for me. 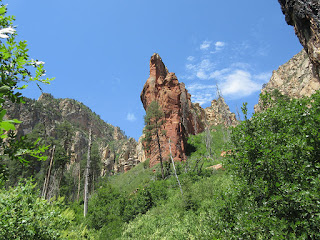 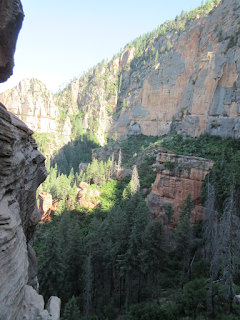 The view from a gap about 3/4ths up the Sterling Pass trail.
The gap exposes an adjacent canyon to the south. 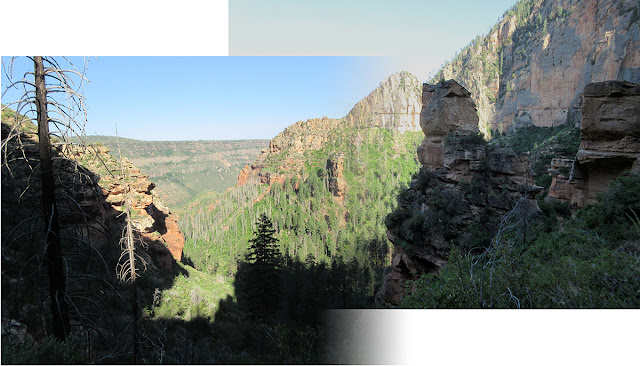 Looking back east after reaching the Sterling Pass. Composite of two images.
The outcrop on the right has a gap through which one can get a stunning
view of a neighboring canyon shown in the previous photo. 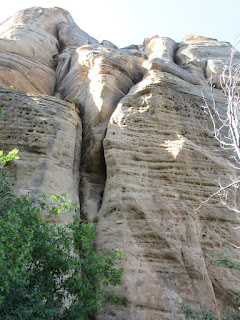 Looking north and up from the Sterling Pass. This is the highest point on the trail.
I suspect that this part of the Toroweap sandstone. 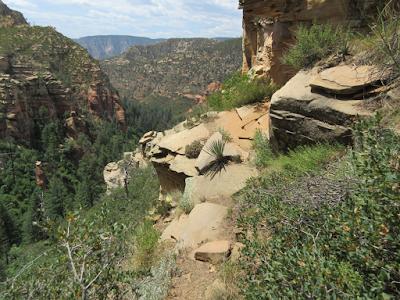 Looking down from the Sterling Pass toward the Vultee Arch.
In this picture, I believe the arch is behind the red formation in the center,
beyond the farthest distinctly visible coniferous trees.

The back side of the pass posed a psychological challenge. It feels darker and more distant, and every step down adds another step up on the return. I watched my water supply carefully and noted the time at various landmarks so I could estimate how much water I needed to ensure a safe return. 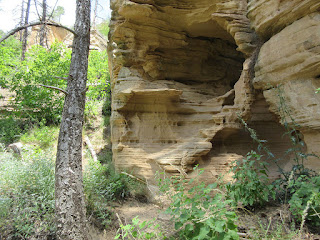 Sandstone on the descent: I see a skull:
a large eye socket with a circle in the cavity,
a mouth and nostril hole. 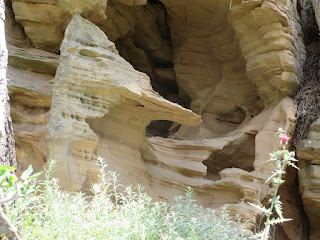 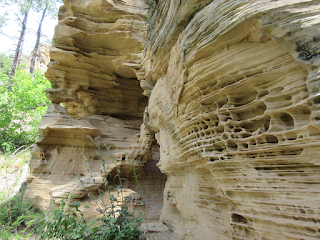 And yet more sandstone 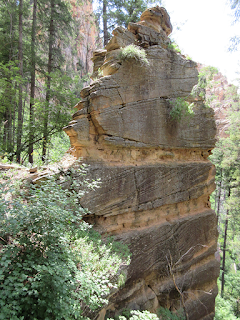 Fascinating towers of cross-bedded sandstone await anyone
descending the back side of the Sterling Pass trail. 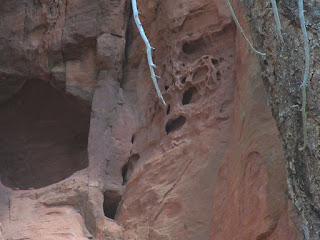 Deeper into the canyon,
a face in red rock may spook the lone hiker.

With each bend in the trail, I watched for the arch, which stubbornly failed to appear. The higher elevations of the hike had lighter color rock than the lower elevations. Soon I decided I had mis-communicated with the Forest Service volunteer. Recalling pictures I'd seen of the arch, I thought it would be lower than the white sandstone layers, and therefore some way down the canyon. I was right. After hiking a distance down that was roughly comparable to the distance I hiked up, there was the arch.

The arch has a splendid natural observing platform, an outcrop of red rock that is easy to scramble up to numerous naturally carved seats. This observing point has a commemorative plaque for the pilot whose crash and death near the area gave the name to the arch. From here there are also trails to the arch where one can walk on it, but I didn't see an obvious trail, and since it required crossing a small ravine to find it, I wasn't in the mood to bush wack, as I already hiked to the safe limit of my water supply. But a selfie is mandatory in this day and age: 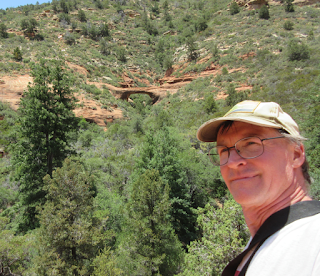 I photographed a Forest Service display and overlaid it with a google maps image of the route. I added the yellow line to mark the approximate location of the trail, camera symbols and arrow annotations: 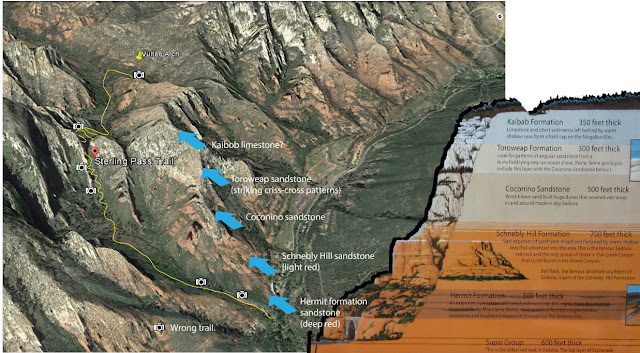 Should any of the terrain intimidate someone, I would still recommend visiting this trail. If nothing else, walk in the first quarter mile, perhaps only 200 yards, to stand among the slabs and pools in a section of the deep red Hermit formation rock. 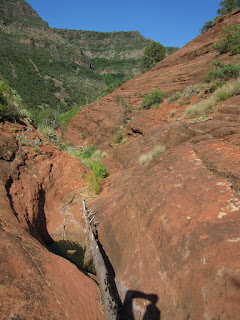