I'm working on a presentation for the Julian Starfest (2013) called 4.6 Billion and Counting.  My presentation is about the Nice model (named after Nice, France) that describes how changing orbits of the outer planets in the first 700 million years of the solar system's existence can account for the nature of these planets' current orbits, the Kuiper-Edgeworth belt, the asteroid belt, Jupiter's Trojan asteroids, and the timing of the late heavy bombardment. I'll be including additional research that has come out since the Nice model trio of papers in 2005, such as projections for the long-term stability of the solar system and significant planetary impacts that affect us today, 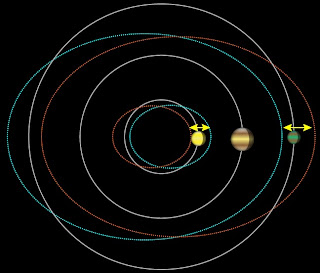 Orbital resonance. I'm working on a simulation of this, where the planets and orbits move. A work-in-progress can be seen on my website: orbit resonance 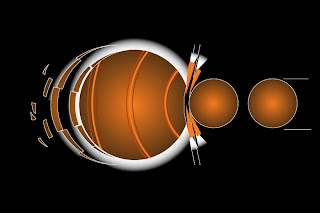 These are the pieces for a pending animation showing the modelled results of the collision of planetesimals. What may happen to atmospheres and oceans on such planetesimals may be revealed by computer modeling of impacts, by modelling of planetary orbits, and by observations of gas content in the atmospheres of Venus, Earth and Mars. 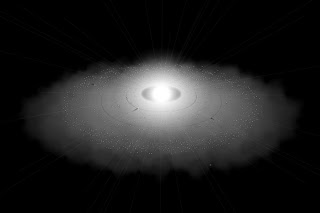 A illustration of the early formation stage after the sun as coalesced and started clearing out the inner solar system of volatile elements while large planets beyond the snow line accrete  quickly.


As with all my presentations, this is a discovery process. I reserve the right to make errors, but will correct all that are called to my attention or that I discover long after the presentation.

John Mason of Skeptical Science has written an excellent overview of long term rock weathering and how it maintains atmospheric CO2 levels. I contributed a sketch on the post in which I tried to stuff every relevent component of the long term carbon cycle into a width of 560 pixels. I also created larger versions that are available in the Skeptical Science Climate Graphics section. 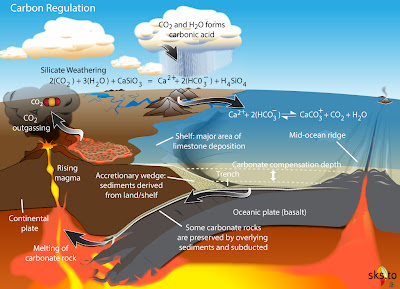 In about 50 minutes, one can read a poorly researched opinion letter asserting that climate change is fiction (e.g., PE letter Climate Change a Fiction), do a google search to find NASA's earth temperature data, download the data into Excel, review the formula for a linear trend, calculate the trends for 10-, 30-, and 100-year time periods, jot down the slope of each, noting that all are positive, and then write a rebuttal, which I did. I'm not the only one who felt a letter in the paper is a minimum provocation for a rebuttal (e.g., PE letter Sacrifice to help stall climate change). And I'm probably not the only one who invests more time researching the topic than the orginal writer of an opinion. In the past, I've regretted capturing a permanent link to such conversations, for the papers sometimes clean their wedsites of old comments and old letters. So, this post is mainly for me to stash a recent ill-informed letter where I and anyone interested may find it.