Two weeks ago I learned that a local church was making a significant expansion to their facilities, an expansion that would include night lighting. Though rushed, I submitted comments that I'm posting below. But first, I regret that I haven't directly contacted the Church. I've been asked twice by members of the community if I'm aware of Cornerstone's apparent violation of our lighting ordinance. The second time was in a public meeting attended also by a member of the church. This member spoke up, said the pastor would be receptive, and offered to talk to him. I gave this person some of my handouts, but I never followed up -- my regret.

Learning that the Planning Dept was considering the Cornerstone expansion, I realized that this hearing was my opportunity and obligation to submit comments. I also believe any well-intentioned group serving the community would use such a hearing to invite comments and concerns from their neighbors.

My comments were as follows:

I am pleased at the attention the initial study gives to lighting and will be eager to review the electrical plans described under sections V.2 and V.3. While I applaud these measures, I wish to question the scope of section V.3, which asks if the project will “create a new source of substantial light or glare that would adversely affect day or nighttime views in the area” (emphasis mine). I assert that Cornerstone’s existing lighting already violates County Ordinance 655 (and Wildomar ordinance 8.80) and is an unnecessarily substantial source of light pollution and glare. As it is common practice to correct existing code violations before issuing new permits, so I would like the City of Wildomar Planning Department to review Cornerstone’s existing impact on the night sky. 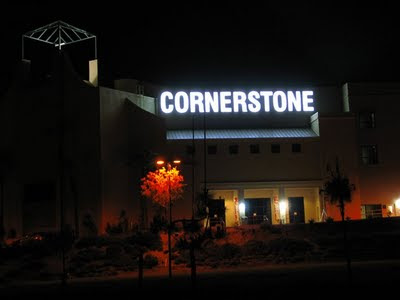 The photos below shows Cornerstone’s existing impact on aesthetics as well as the sky: 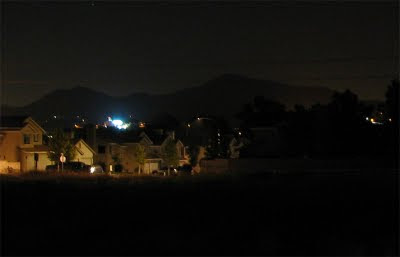 The above photo shows Cornerstone from Grand Ave, near David A. Brown Middle School (at least 1 mile distant). The sign is prominent, and the lower lights are temporary lights supplementing their parking lot lighting.

Below, in this attempt to capture dusk on San Jacinto Mountain, the Cornerstone sign (lower right) becomes the dominant intrusion into the scene. It gets worse as one takes longer exposures to capture the night sky. 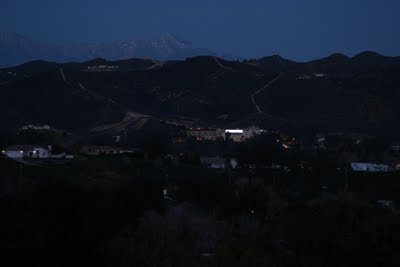 I think this photo (below) shows how the sign and façade lights overwhelm the cross. The cross would be easier to see with a darker background. 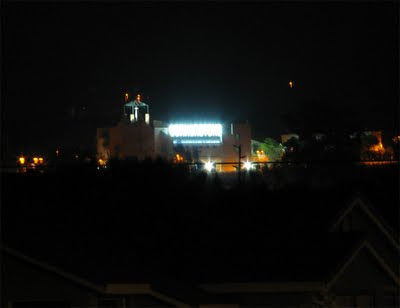 My request is as follows:
1. The City of Wildomar should use the permitting opportunity to achieve all minimal impacts possible, especially where changes to existing lighting violate County and City lighting codes.
2. Consider improvements to the lighting plans that will pre-empt a temptation to over-light the new parking lot. For example, if the parking lot has too few low pressure sodium lights, there will be a temptation to use temporary flood lighting. Well-shielded, low-profile landscape and walkway lights from the parking lot to other areas can minimize the perceived need for extra lighting. (Note added here: that with this comment, I'm trying to offer a compromise that considering the number of people served by Cornerstone and that many activities will occur at night, I'm open to variances that ensure that their visitors feel safe).
3. Set a standard that uses contrast instead of brightness to emphasize sacred and patriotic imagery. (Note added here: I'm not objecting to their uplit cross; rather, I'm offering a standard that this is the object that they should want most prominent and the best way to achieve this is to reduce the other lighting).