A bright and colorful picture of impending doom and gloom

As global warming heats the arctic faster than the rest of the
world, vast stores of methane and CO2 are likely to be released.
I've contributed an illustration to a post at www.skepticalscience.com
summarizing the mechanisms of greenhouse gas release from the
arctic. My diagram appears in Part 1 of the series: 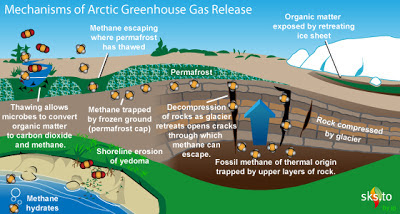 Humanity is getting a 2 for the cost of 1 deal on our greenhouse gas
emissions: because the oceans and terrestrial biosphere have been
absorbing half of our emissions, we incur half the environmental
cost of our energy use. Eventually, the ability of the oceans and
biosphere to absorb emissions may become saturated and even
reversed, so that these regions emit greenhouse gases, a process
that's starting in the Arctic.
jg
Posted by jg at 12:46 PM No comments:

On Oct. 12, 2012, I participated in an independenly organized TEDx event in Temecula. My 12-minute talk on light pollution can be viewed here: