Jennifer Francis of Rutgers University has a 1/2 hour talk on YouTube on arctic amplification in which she explains how climate change is affecting our weather. The presentation can be viewed here:
Extreme Weather, by Jennifer Francis

At about 17-18 minutes into the presentation, she uses some animations I created for a post on the jetstream by John Mason, of Skeptical Science. The complete post is here:
http://www.skepticalscience.com/jetstream-guide.html

Both Dr. Francis's presentation and John Mason's article are excellent sources for understanding weather and how long term climate change will affect weather. Specifically, climate change is warming the arctic which changes the behavior of the jetstream which determines our weather.

The must-see item in the presentation, however, is the video she includes from NASA that shows the jetstream in action. This video improves on my schematic, but it was an eerie, pleasant feeling for me to see it after creating animations that depict the same effects.

Unfortunately, the color choice I made for one of the schematics didn't show up well in the video (the animation is projected onto a screen and then captured by a video camera). The original animations can be seen with the Skeptical Science jetstream article (above) and are posted on my website here:

I had an opportunity to contribute an illustration to Dana Nuccitelli's blog at The Guardian: Climate Concensus - The 97%. Below is a variation of the illustration used, but without the typo. 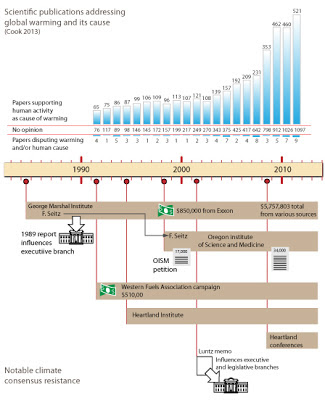 The illustration in a larger form (also without the known typo) is available from the Climate Graphics section of the Skeptical Science website. I expect to be doing variations of this illustration, as the notion of a consensus is still provocative among those unwilling to face the implications form climate studies. The existence of a consensus, what it is based on, and how that message has been derailed will have to stated and restated if humanity is to unite in time to avert unprecedented rates of global change.

I believe it has been ten years since I first started making public presentations on behalf of my astronomy club. My first presentation was at a Lake Skinner star party. The event coordinator, their park interpretor, asked for presentation, so I cobbled together 40 slides that I had taken and made a show. After the show, a family approached me and said their son would like to think me. I looked down, and their 3-4 year old son hugged my leg. Presentations would become one of the worth while activities I'll do.

I recall another great act of gratitude when a child approached me after a show and gave me a quarter. First he said, "here's a nickel" and put it in my hand. Not looking at it, I said, "yes it is". Then he said, "no, I mean, it's a quarter". I looked more carefully and corrected myself. "Yes. A quarter." Then the boy said, "It's for you. Thanks for the show." I accepted graciously. One doesn't turn down a gift or reject a gesture of thanks. At the time, this was the most I'd ever been paid for show, and my friends assured me that I was probably worth every penny.

My one regret in shows is that I don't have an opportunity to correct my errors. I try to present my own photos so that I can show people honestly what I saw, though sometimes I'm mistaken as to what it was. Such was the case with a photo I took on slide film around ten years ago. I was tracking the asteroid Ceres, and on one of the nights, something passed through my field of view (click or double click to enlarge the image): At the time, I thought that whatever caused the striek (a plane or satelite), I was impressed that it happened to intersect three stars, and I made this comment in a few presentations. Later, I realized my error: the plane or satellite also created the bright white star-like images on the film. Notice how evenly spaced and of similar brightness they are, and that two appear to have a dimmer companion at the same position.

With this lesson in mind, I dismissed a photo taken last month as a result of the same effect. 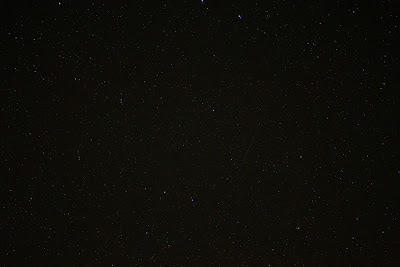 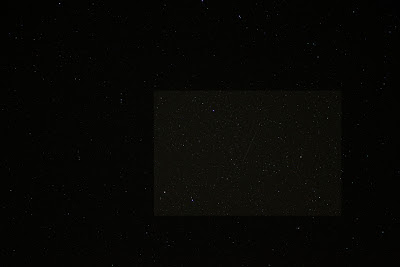 Here's a close up. Notice that the striek passes through several stars -- I was very suspicious. 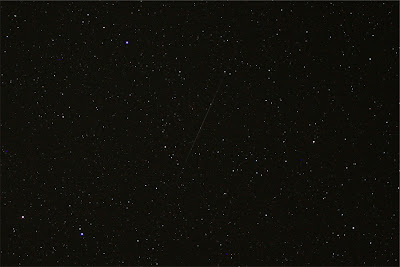 Fortunately, I took more than one image. By switching the view between these last two images, I could see that the stars crossed by the meteor appear in the picture below taken a few minutes later: 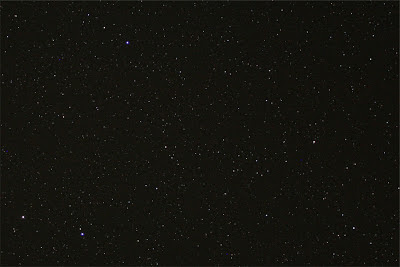 It is a meteor!