Partial report on the partial eclipse

Here are a few photos I took of the partial solar eclipse yesterday. I hope to return to my photos and carefully select the best of the set. 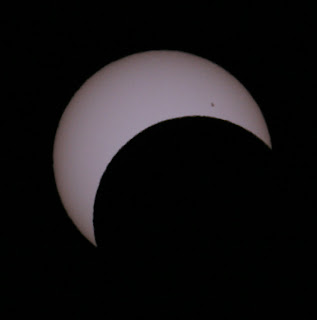 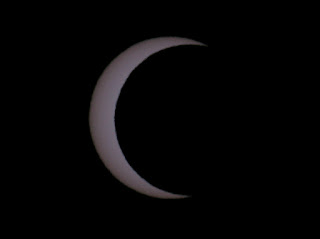 Maximum coverage from my location. 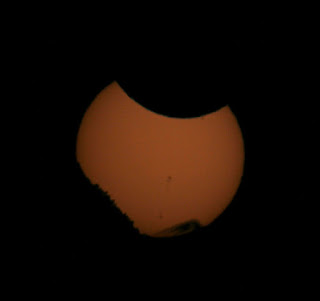 Sunset with both the horizon and the moon taking a bite out of the sun.
And after a little processing and manipulation (rotating, brighten, sharpening and noise reduction), this one is my favorite: 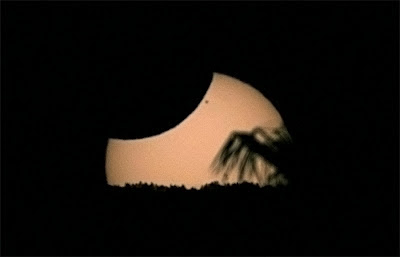 A friend has prompted me to post for reference a couple illustrations I've created for www.skepticalscience.com on estimates of emissions of CO2 by volcanoes. It is a common belief that volcanic activity produces more atmospheric CO2 that human activity, however, research shows that in the modern era, volcanoes haven't been active enough to account for the steady rise in CO2.

The first chart compares surface temperatures by the Goddard Institute for Space Studies with atmospheric CO2 and stratospheric optical thickness, which is used as a proxy for volcanic activity. 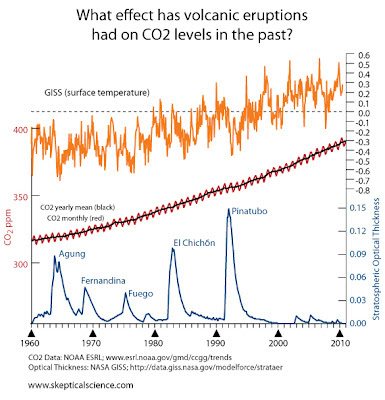 The second illustration summarizes the conclusion of Terry Gerlach of USGS publishing in the Transactions of the American Geophysical Union: Volcanic vs Anthropogenic Carbon Dioxide, EOS, 14 June 2011). 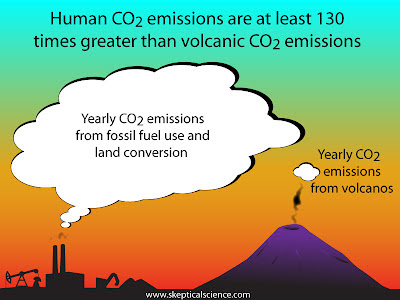 In the above diagram, the area of the clouds correspond to the emissions of each source.
jg
Posted by jg at 8:57 AM 2 comments:

Another super-moon comes and goes

Last weekend was another super-moon, meaning the full moon phase occurred close to the point of the moon's perigee (closest point to Earth in the moon's monthly orbit). This happens almost every year where full moon occurs about a day from perigee, but during last week's super-moon, perigee and the full-moon phase were one minute apart. I enjoy the novelty, but the appearance of last week's super-moon is similar to any other super-moon, at least as examined with my photography.

These photos compare the super-moon to the moon one and two days away from perigee. 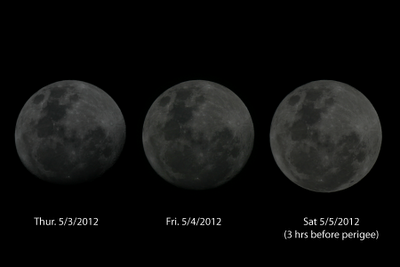 The apparent size difference above is due mostly to the change in phase. In the following image, I carefully traced the perimeters of each photograph with a circle. 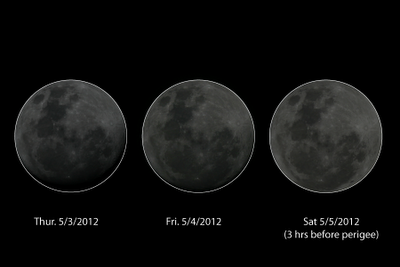 Then I centered and top-aligned my circles: 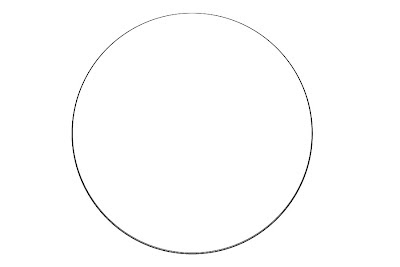 The thicker line at the bottom shows the difference in size between this super moon occurring near perigee and other super-moons occurring a day or two from perigee. This difference is barely detectable with my method.
So, if you missed the May 5 super-moon, you didn't miss anything other than the novelty of the timing of full moon and perigee being 1 minute apart.

The Heartland Institute has received a lot of attention for their anti-science positions regarding global warming and generous funding from a few major corporations. Even the journal Nature has discussed Heartland's activities and published an admission by Joe Bast of Heartland that the science is not on Heartland's side. Other bloggers (check out Openmind on my blog list) are sharing details of Heartland's recent billboard implying that activists like me have a lot in common with terrorists like Bin Laden and Ted Kaczynski.

Rather than retell this story, I wish to share a local variation. Four years ago a sixth grade class from Wildomar Elementary wrote "shame on you" letters to the Heartland Institute. The Heartland Institute, not otherwise engaged in valid research, found time to criticize the teacher and incite anger through a local paper's community forum. The forum article from Heartland, published in the Press Enterprise on 14 April 2008, is how I know of the sixth grade class's activities.

Maureen Martin of Heartland criticized the students for numerous errors on the science, which fair criticism; for example, quotes from the letters showed confusion between between greenhouse gases and other forms of air pollution. She went on to say the letters demonstrate brainwashing and ended with the statement "If my children attended this school, I would be outraged".

Rather than be outraged, I was impressed that 6th graders were aware that there are organizations who  manipulate public opinion using disinformation. I think Heartland's latest tactic, the billboard, vindicates the teacher, if there had been a need for vindication.

One of my recent projects has been creating this graph depicting data collected by the World Glacier Monitoring Service. The graph shows the status of glaciers, whether they are increasing or decreasing in mass. The mass change is in millimeters and should be thought of analogous to sea level. E.g., a 1000 mm change means the average surface height of a glacier rose or fell by 1000 mm (or 1 meter). The actual data I used is from Table 3 on the WGMS preliminary mass balance page, last updated 28 March 2012. Note that you'll need to double click the graphic below and download it to see it in its proper size.